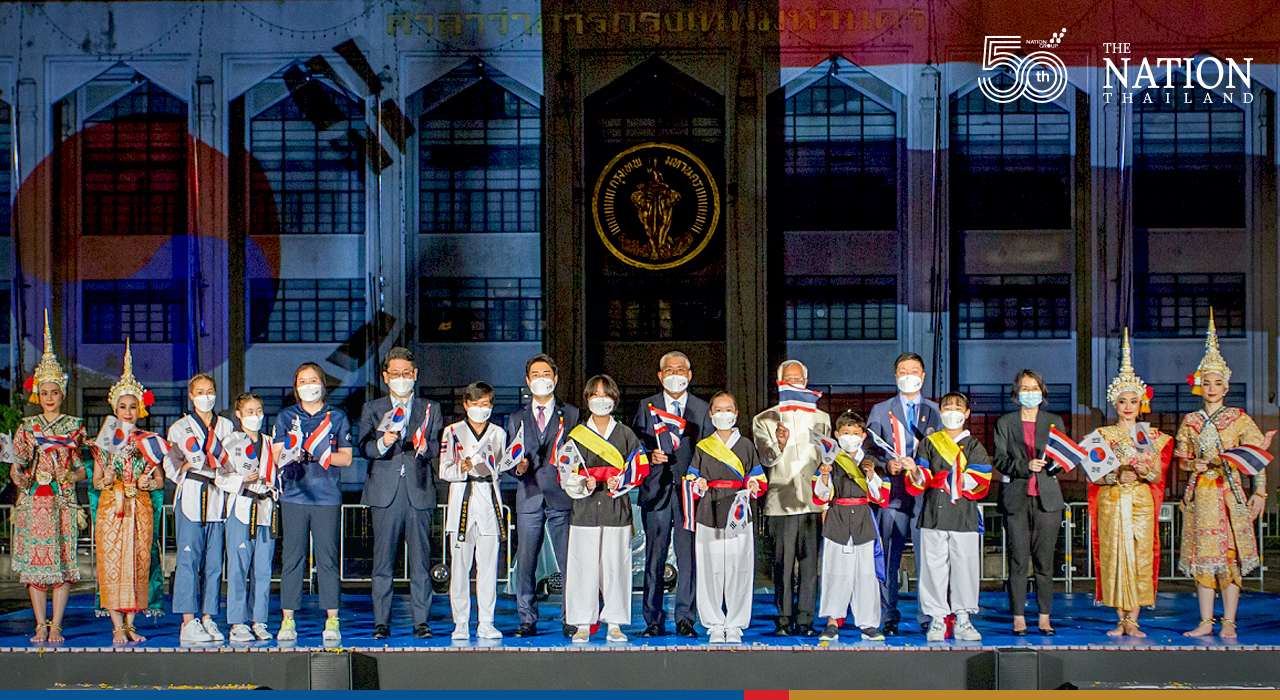 On Sunday, the embassy of the republic of Korea in Thailand hosted the online ceremony for Korean national day at Bangkok City Hall with cultural performances and Taekwondo demonstration.

The whole ceremony was live streamed by the Korean Cultural Centre's Facebook page to keep prohibition on group gathering by Covid-19 and enjoy the event with many Thai people.

Before the ceremony, 'Ruam-mue Ruam-jai Duai-kan(Let's join hands and heart together)' proceeded for the underprivileged in Bangkok. Korean food including Samgyetang(Korean chicken soup with ginseng) and Kimchi, was delivered by H.E. Mr. LEE Wook-Heon, Ambassador of the Republic of Korea, the national Taekwondo coach Choi Young Seok, the national Para-Taekwondo coach Shin Young Kyun and Tokyo Paralympic medalist Kwansuda. After then, around 18:40 PM, the main event was held with the short media facade show.

By the opening address, H.E. Mr. LEE Wook-Heon, Ambassador of the Republic of Korea mentioned that recently Korea and Thailand have created synergy effect in various field, such as health care, economic, education and culture under cooperation of both countries. H.E. Mr. Lee emphasized that two countries can overcome Covid-19 together and prepare for a better future. Dr. Vallop Suwandee, Chairman of Advisers to the Governor of Bangkok, responded by his congratulatory address that Thailand and Korea have maintained the close relationship, and both countries will share sustainable prosperity by the economic, social, cultural exchange.

For cultural performances, 'Krida Phiniharn', a Thai traditional dance for blessing, was performed by the College of Dramatic Arts, and students from the Korean International School in Thailand played 'Sam-do-Samulnori', Korean traditional percussion music by four musical instruments. The Thailand National Taekwondo Poomsae Team also showed the Taekwondo demonstration with various music, including Blackpink's 'How you like that'.

As the highlight of the event, the fantastic Media Facade Show was processed against the whole facade of Bangkok City Hall. Amazing lighting display described various things, such as the national flowers and the national flags of both countries, the tiger, and the bear, which are the national animals of Korea, and the elephant, which is the Thailand's national animal. Also, many scenes how both countries cooperated in diverse fields, were on the facade, and delivered the message 'Let's overcome covid-19 together' and 'We unite our hearts' by both languages.

Finally, Coach Choi, Coach Shin and Paralympic medalist Kwansuda, the symbol of both countries’ cooperation, were on the stage and Kwansuda smashed a pine board, which named 'Covid-19'. Then, all participants did sign language activity to hope overcoming Covid-19 together.

H.E. Mr. Lee said, "Today's online ceremony proved that we could do various diplomatic activity, if we grasp the creative alternative amid difficulties by Covid-19", and "Recently, young generation of both countries have produced great results by cooperation, for example, Korean Coach Choi and Thai Player Panipak's Olympic gold medal, Coach Shin and Player Kwansuda's Paralympic bronze medal and Lisa's 'Lalisa' music video. For the future, both countries can produce the good result in many fields, if we continue to cooperate".