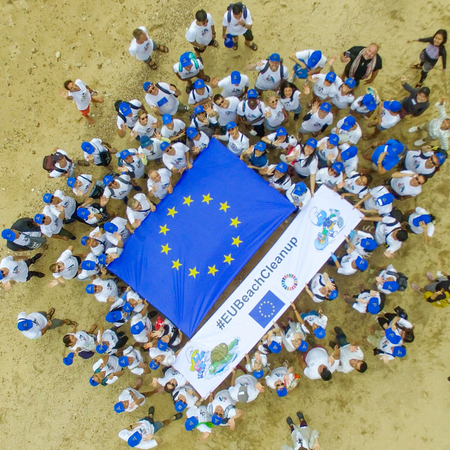 Science applied to removal of plastic pollution on Koh Sak

European Union (EU) Ambassador Pirkka Tapiola led more than 150 participants, including diplomats and Thai staff from the EU delegation to Thailand as well as members of the public, on September 14 to clean up Koh Sak, an island off the coast of Pattaya.

The EU delegation has been collaborating with a research team from Mahidol University International College (MUIC) to tackle plastic pollution and litter in the oceans for a second year now.
In line with the global #trashtag trend, the EU is also partnering with Dr Wayne Phillips, a lecturer at Mahidol who has been leading ecological research on the island via Project Koh Sak, which focuses on environmental issues, such as coral reef protection, restoration and rehabilitation, and is also investigating the threat plastics have on the health of coral reefs. The EU-MUIC beach clean-up efforts aim to not just build awareness of the positive impact individuals can have on pollution by collecting waste, they also educate participants on the lifecycle of plastic, from its creation to its implication on coral reef systems, food chain and human health.
In an effort to clarify lingering misconceptions about the relationship between economic growth and environmental protection, the EU is linking its clean-up efforts to global strategies and policy development. As Tapiola explains: “Economic development, biodiversity, resilience and emission reductions are not conflicting objectives. We can achieve them all at once through smart environment, marine and climate policies. We need global efforts to protect precious coastal ecosystems and the multiple, essential services they provide.”
With more than 3,000 plastic bottles collected on one small island in a short period of time, the problem was clear. But more importantly, all the participants sorted, counted and measured the waste, before learning about the reasons behind the research. This scientific approach to beach clean-ups instils a deeper understanding of the impact our daily actions can have on the oceans and marine life. Similar clean-up efforts in other countries have unveiled the shocking volume of waste created by humans but taking a civil-science approach will allow us to understand the unbreakable relationship we have with the environment.
As Phillips said: “We tend to focus on the plastic and forget the fact that there is nature beneath that plastic, so bringing people here to remove that plastic makes it more obvious that nature is there, giving us its benefits.”

Similar cleaning up activities led by the EU delegation in Thailand is foreseen for the next year. The EU team aims to scale-up efforts by establishing a civil network that engages with volunteers and local youth to drive the message and sense of urgency to fight against plastic pollution in line with the EU Plastics Strategy. The strategy was adopted in January 2018 as part of a transition towards a circular economy with a vision for a smart, innovative and sustainable plastics industry.
The clean-up efforts are also in line with the EU’s global #EUBeachCleanup campaign in the run-up to the United Nations Climate and Sustainable Development Goal Summits held from September 23 to 25 during the UN General Assembly and the Climate Diplomacy Weeks from September 23 to October 6.
Those interested in joining can visit @EUinThailand on Facebook and Instagram for updates.
Background
● Nearly 80 EU delegation members and representative across the world are involved in the EU Beach Clean-up this year;
● Plastic accounts for 85 per cent of beach litter across the world and about 8 million tonnes of plastic enters the oceans yearly, threatening most marine species. Single-use plastic products constitute 70 per cent of all marine litter.
● Under the EU Plastics Strategy, the EU will:
- Make recycling profitable for business
- Curb plastic waste
- Stop littering at sea
- Drive investment and innovation
- Spur change across the world