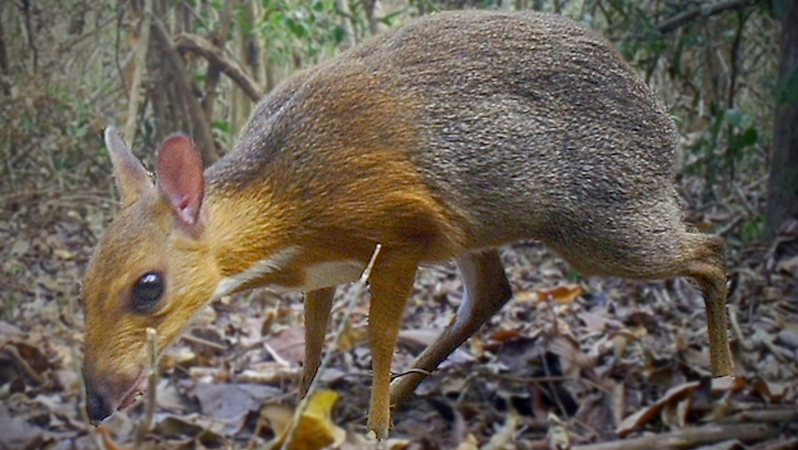 HÀ NỘI — A deer-like species thought lost to science for almost three decades has been discovered living in Việt Nam, according to a new study in Nature, Ecology and Evolution.

Known as silver-backed chevrotain, the animal was first described in 1910 based on four specimens obtained near the city of Nha Trang.

The silver-backed chevrotain was last seen in 1990 when a joint Vietnamese-Russian expedition in Gia Lai province obtained a hunter-killed chevrotain in the vicinity of Đắk Rông and Buôn Luôi.

No record of the species has been confirmed since 1990. It was feared that the species might have been on the brink of extinction because of hunting.

In March 2017, members of a research team brainstormed about where to look for the chevrotain. They focused on dry coastal forested areas in the vicinity of Nha Trang, as this is the area where the original specimens were collected.

Trần Văn Bằng, a Vietnamese biologist, who works for the Southern Institute of Ecology, and colleagues conducted interviews with local people and forest rangers in Ninh Thuận Province. Then they placed cameras where the animals were reported likely to visit.

After three months, the team obtained footage of the species in 15 different places.

He told Việt Nam News: "Up to now, all records from scientists in the world have shown the silver-backed chevrotain only live in Việt Nam, so this is an endemic species of Việt Nam. This makes it special.

“The discovery is significant in many aspects. First, discovering a new species contributes a lot to our knowledge on biodiversity. The discovery of an animal which has been lost to science or extinct is confirmation that the ecosystem in that specific area is still suitable for that species.”

“Scientists particularly care about endemic species as they are highly prone to extinction. The discovery increases the chance for us to protect Việt Nam’s nature and related species through protecting the habitat for the silver-backed chevrotain,” Bằng said.

A still from a remote camera shows the Silver-backed Chevrotain - long considered to be near-extinct - in a forest in central Việt Nam. Photo courtesy of Global Wildlife Conservation

An Nguyễn, a Vietnamese biologist, who works with the Global Wildlife Conservation (GWC) and a member of the team, was quoted by AFP as saying:

“The results were amazing. I was overjoyed when we checked the camera traps and saw photographs of a chevrotain with silver flanks.”

The silver-backed chevrotain is the world’s smallest ungulated-hoofed mammal and is around the size of a rabbit.

The most distinctive external characteristic of the chevrotain is its unique two-tone pelage coloration, with an ocherous-buff anterior and a silver or grey posterior. The grey hairs are conspicuously tipped with white, giving the posterior a grizzled appearance.

According to Global Wildlife Conservation, they are shy and solitary and weigh less than 4.5kg. It is on the list of top 25 most wanted lost species.

The study's findings have implications for other species that are lost to science, said Andrew Tilker, Asian Species Officer at the GWC.

"To the scientific world this was a lost species, but local people had known about it. It was only by utilising the local ecological knowledge that we were successful. That can be replicated for other species in other parts of the world," he told CNN.

By publishing the findings on the continued existence of the silver-backed chevrotain, the team hopes that more attention would be paid to the species together with additional surveys and protection.

“Without immediate follow-up action, there is a risk that the silver-back chevrotain could be lost once again,” write the authors.

Bằng said: "At the moment, our team has just identified one area where footage of chevrotains was found. We still don’t know how many chevrotains are still alive in Việt Nam and where they are.

"The next step is to find the exact number of them and their whereabouts. We will look for them in other places like Gia Lai, Phú Yên and Khánh Hoà. We will weigh the risks that may decrease the number of chevrotains and only after that will we devise plans to protect them." — VNS