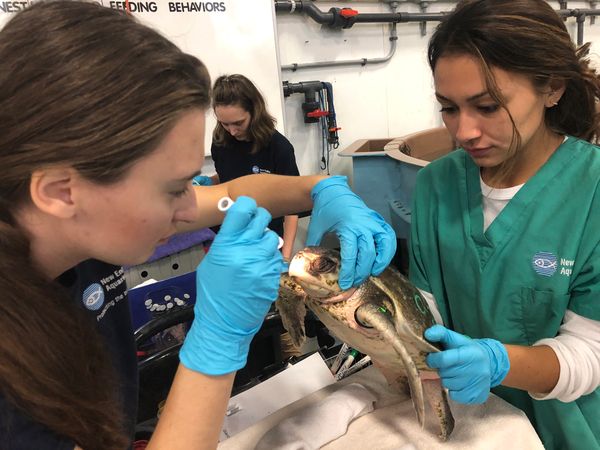 Coming to aid of sea turtles in troubled waters

Sea turtles, which have roamed our oceans for 110 million years, have come under assault from poaching, oil spills, entanglement in fishing gear and a steady diet of plastic. Lately, the climate has been turning against them.

Endangered Kemp's ridleys, greens and loggerheads are drawn to the warming waters of the Gulf of Maine, which stretches from Nova Scotia to Cape Cod and is heating up faster than 99 percent of the world's oceans.

The turtles, most of them juveniles, summer in Cape Cod Bay, feasting on jellyfish and crabs, but when the weather turns in October and November, they miss cues to head back south. An ever-growing number are getting trapped by the hook-shaped projection of Cape Cod, unable to find their way back to open ocean.

When the temperature plummets below 55 degrees, they become "cold-stunned" - hypothermic, unable to eat or move, and drift passively until tides carry them ashore.

There they would die - if not for the intrepid volunteers from Mass Audubon's Wellfleet Bay Wildlife Sanctuary who patrol the beaches, searching miles of sand for desperate turtles, willing to brave a nor'easter to find them, provide first aid and send them to a hospital in Quincy, south of Boston.

The nonprofit sanctuary has rescued more than 5,700 turtles since director emeritus Bob Prescott started tracking them in 1979, says Jennette Kerr, marketing and communications coordinator. In 2014, a record year, more than 1,200 turtles were found.

One morning in mid-November, local resident Erin Connelly is walking on Mayflower Beach in Dennis, Massachusetts, when her golden retriever, Finley, unearths a sea turtle. Its eyes are crusted with hardened sand, its flippers moving feebly. Connelly knows whom to call.

Armed with an empty banana box, Wellfleet Bay volunteer Triscia Hennessey is dispatched to retrieve the juvenile Kemp's ridley. The critically endangered species accounts for 85 percent of the cold-stuns and must be transported in an unheated car, so as not to shock it.

Hennessey heads to the processing room at the sanctuary, set in woodlands and salt marsh, where research technician Jamien Meservey measures and weighs the turtle at 7.71 pounds. It would take laparoscopic surgery to learn its sex at this age, but we know that warming in the nest environment in Texas or Mexico is producing more females.

The turtle - probably a female - rests in a cool room, until the next vehicle leaves for the 90-mile drive to New England Aquarium's Animal Care Center in Quincy. It is a bona fide sea turtle hospital, where she is admitted as Turtle 94.

Connie Merigo, director of the Aquarium's Rescue Rehab program, describes the operation as "the equivalent of a trauma center." Housed in a nondescript warehouse on a shipyard, the interior is a vision of aquamarine, from the giant tanks to scrubs-clad staff tending reptilian patients.

Turtles are evaluated for the immediate dangers of hypothermia, and related problems such as low blood sugar, pneumonia or decreased heart rate and respirations.

"Sometimes we are seeing a heartbeat of one beat per minute," Merigo says. "But that animal is still alive and, with emergency care, can go on to survive and be released."

The center sees a lot of eye damage, fractures, boat strikes, hooks in the mouth and more. Turtles may need fluids, cardiac stimulants or other medications depending on their bloodwork.

Fortunately, Turtle 94's blood tests look good. Within a day, she starts physical therapy, stimulating blood flow. The turtle pool is a frigid 55 degrees, but over time, she will graduate to warmer waters. Recovery is on the horizon.

The Aquarium made a literal splash this year when it released a 330-pound loggerhead. The massive turtle was found near death in November 2018 by Wellfleet Bay volunteers who initially mistook the turtle for a huge rock in the surf.

"Munchkin" spent nine months in rehab. Then on July 2, she was taken to West Dennis Beach by truck. A dozen people had to lift her, and hundreds cheered her to the sea. A satellite tracker on her shell showed she was recently off the coast of the Carolinas.

Each release must begin with a rescue, and it's all hands on deck at Wellfleet Bay with stranding season underway. Last year, Kerr says that over 800 turtles were found. So far this season, there have been 255. Most cold-stuns have occurred in the past decade, and the problem promises to get worse.

The sea turtle rescue operation works with 250 volunteers, plus a staff that includes marine biologists, research technicians and rescue coordinators. The team diligently studies tide charts and variables such as wind direction, intensity and duration to target specific beaches. Prescott deploys volunteers in pairs to align with the high tides, be it at noon, or midnight by headlamp in frost and howling winds.

Artists Anne Boucher, 66, of Cotuit, and Heather Pilchard, 55, of Eastham are assigned to walk Cold Storage Beach in East Dennis at first light. Pilchard climbs swaths of rocks at the water's edge, scouring for dinner plate-sized ridleys that could be wedged within. Boucher follows a trail of eelgrass and other oceanic debris left on the sand at the tide line. They know to use this seaweed or "wrack" to cover cold-stuns, protecting them from the elements and predators, until transportation comes.

Like many veteran volunteers on patrol, they are intimately familiar with "their beach" and its potential perils. They know that the difference between 10-foot and 12-foot tides can mean suddenly there is no beach on which to walk; but they welcome the powerful winds, preferably sustained for days, that carry stunned turtles to shore and potential salvation.

"It's like your emotional cup is overrun," Pilchard beams. Sometimes, she says, finding a turtle is so moving it makes her cry.

The two share a special release memory. In December 2017, they found a 50-pound loggerhead. The following July, they were invited to the send-off, and were surprised to hear their names called. "We got to release our turtle!" Pilchard says.

"We didn't even have time to cry," Boucher laughs, recalling trying to lift the testudine that had grown to 77 pounds. "Watching it go into the water and just disappear . . . ," Pilchard says, her voice trailing off as she reflects on the memory.

As for Turtle 94, she continues a journey probably begun as a hatchling in Rancho Nuevo in Tamaulipas, Mexico, Bob Prescott says. There, binational conservation efforts helped ensure that her mother made it to shore to lay eggs. From the Gulf of Mexico, swept into the Florida currents, she may have visited the seaweed community of the Sargasso Sea before riding the jet stream toward New England.

When an attending vet signs off in Quincy, she will join other shelled-passengers on a flight to a collaborative organization or aquarium farther south along the East Coast for more convalescence, courtesy of Turtles Fly Too, brainchild of Leslie Weinstein who manages a roster of volunteer pilots for the charity.

Then on the biggest day of her rare and precious life, she will inhale the scent of salty air, as did her innumerable ancestors going back to the time of the dinosaurs. With the goodwill of many humans (and one golden retriever) behind her, she will put one flipper in front of the other, and move toward the ocean that is home.