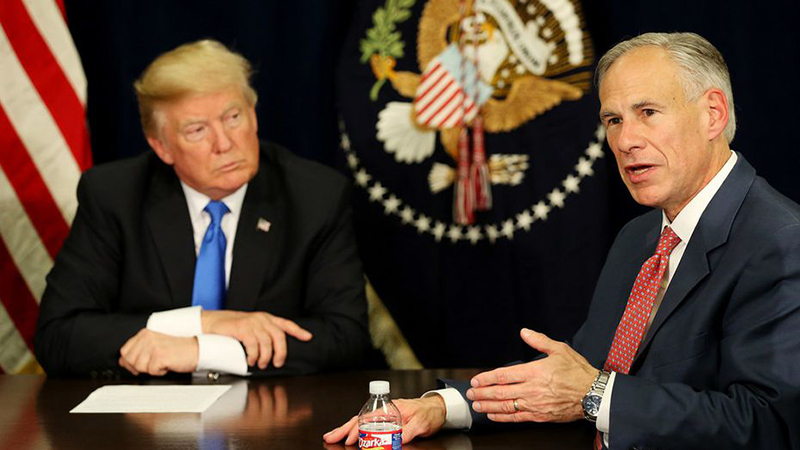 Texas will reject the resettlement of new refugees, its governor said Friday, becoming the first state to publicly do so since a Trump administration executive order granted such unprecedented veto power.

In a letter announcing the decision, Gov. Greg Abbott, a Republican, argued that Texas has "carried more than its share in assisting the refugee resettlement process" and said the state's government and nonprofit agencies have also been strained by "a broken federal immigration system."

"Texas continues to have to deal with the consequences of an immigration system that Congress has failed to fix," he wrote in the letter, which was addressed to Secretary of State Mike Pompeo.

Under the order, refugees could still make their homes in Texas - but only after settling in another state first, Abbott said. But critics said the policy change underscores a growing hostility to the country's refugee resettlement program - especially in some conservative states and the White House.

In September, after slashing the annual national refugee cap to a historic low, President Donald Trump also gave states and localities sweeping authority to block refugee admissions by requiring their governments to consent in writing before people are allowed to arrive. So far, 42 states have agreed to accept refugees, according to a tracker maintained by the Lutheran Immigration and Refugee Service.

Texas is the first state to refuse them.

Human rights advocates and the state's Democratic lawmakers condemned Abbott's decision, calling it cruel and antithetical to Texas' history of welcoming those who flee their home countries.

"This is a disgraceful move by Texas Governor Greg Abbott," Rep. Joaquin Castro, a Democrat whose district includes San Antonio, said on Twitter. "He has completely submitted to bigotry and xenophobia."

Texas has long been among the country's leaders in refugee resettlement. Last fiscal year, it took in more refugees than any other state, according to federal data. This year, of the nearly 3,350 refugees resettled nationally, Texas has taken in about 260, putting it third behind Washington and California.

"Texas is one of the most welcoming states for refugees seeking to escape dangers abroad," Abbott wrote, adding that 10 percent of all refugees resettled in the United States have come through his state.

And mayors from Texas' largest cities had lobbied Abbott to continue that policy of embrace, praising the resettlement program for spurring economic growth and introducing their communities to new cultures.

"Regardless of where someone is from, who they are, or what they believe, there is a home for them in Houston," the city's mayor, Sylvester Turner, a Democrat, said in a statement. "Our welcoming spirit has led to our city becoming the national leader in refugee resettlement. We remember Exodus 22:21, 'Do not mistreat or oppress a foreigner.' "

But in announcing his executive order, Trump said he was empowering local governments to refuse something that has for years has been imposed on them. At an October rally in Minneapolis, Trump boasted of the change, telling the crowd "no other president would be doing that."

"You should be able to decide what is best for your own cities and for your own neighborhoods," Trump said as images of Rep. Ilhan Omar, D-Minn., who came to the United States from Somalia as a refugee, flashed across jumbo screens. "And that's what you have the right to do right now."

Shortly after, three refugee resettlement agencies sued the administration, saying the order violates long-standing federal policies to welcome refugees. The consent requirement, the organizations argued, has caused confusion and could threaten the extensive network that has helped refugees find housing and jobs for decades.

A preliminary decision in the case is expected later this month.

The Texas decision demonstrates the urgency of that lawsuit, said Rev. John L. McCullough, the president of Church World Service, one of the plaintiffs in the case.

"This decision will devastate refugee communities, lead to family separation for refugee families and leave refugees, former refugees and United States citizens without supportive services," he said in a statement.

Abbott has opposed refugee resettlement in the past, trying to stop those fleeing Syria from entering Texas in 2015, after Islamic State militants carried out a series of attacks in Paris, killing 130. That year, he directed resettlement groups to cease accepting Syrian refugees, a move blocked by the federal government.

The next year, Abbott withdrew Texas from the resettlement program altogether, but even that couldn't stop the federally-funded effort from placing refugees there.

Then, as now, critics argue, Abbott's decision was more about sending a hard-line message. Because the Trump administration is allowing just 18,000 refugees into the country this year, the number that would have ended up settling in Texas would not have made much of an impact, said Eric Schwartz, president of Refugees International.

"The number of refugees resettled in Texas would have been very small," he said in a statement, "revealing that Governor Abbott's announcement is more politics than about policy."