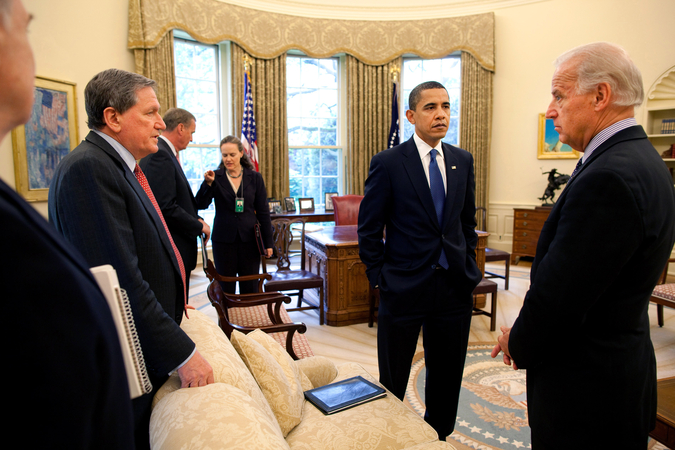 Joe Biden's campaign has long viewed his partnership with former president Barack Obama as one of his chief assets in running for president. He spoke often of "my buddy Barack" during campaign events.

To mark National Best Friends Day last year, Biden posted a photo of a friendship bracelet reading "Joe" and "Barack." He touts work from the "Obama-Biden administration" and defends the "Obama-Biden record."

But for the past year and a half there has often been a critical piece missing: Obama.

That began to change in April, when Obama endorsed Biden. On Tuesday it went a step further, as Obama and Biden made their first joint appearance in years, the former partners allied as they attempt to defeat President Donald Trump.

Obama was the main draw at a virtual fundraiser for Biden, raising more than $7.6 million from 175,000 individual donors, according to Biden's campaign.

"You're all feeling a sense of urgency, the same kind of urgency I'm feeling right now," Obama said near the start of the fundraiser. "I'm here to say: Help is on the way."

Obama launched into an in-depth criticism of Trump, without mentioning him by name, and said that while his own administration inherited problems, "the foundation stones, the institutions we had in place were still more or less intact."

"My predecessor, who I disagreed with on a whole host of issues, still had a basic regard for the rule of law and the importance of our institutions and democracy," he said.

"What we have seen over the last couple of years is a White House enabled by Republicans in Congress and a media structure that supports them . . . that suggests facts don't matter, science doesn't matter," Obama said. "That suggests that a deadly disease is fake news. That sees the Justice Department as simply an extension and an arm of the personal concerns of the president. That actively promotes division. And considers some people in this country more real as Americans than others."

He urged those watching to do more and to take the election seriously.

"Man, this is serious business. Whatever you've done so far is not enough . . . We have to do more," Obama said. He warned Biden supporters of Trump's strength, and not to underestimate his ability to harness his supporters.

"We can't be complacent or smug, or say it's so obvious this president hasn't done a good job," Obama said. "Look. He won once."

Obama also turned toward Biden, touting his work with "our presidency" and saying that the tragedies in the former vice president's life allow him to better understand the lives of average Americans.

"This is somebody who has been touched by tragedy in a direct, profound way, and as a consequence has enlarged his heart to embrace other people who are undergoing tragedy," he said.

The event marked a new phase for Obama, who is expected to increase his campaigning not only for Biden but also a full slate of Democrats aiming to preserve the House majority and win back the Senate.

Obama is seen as vital to energizing elements of his coalition with whom Biden has struggled, including young black voters as well as liberal voters who have distrusted the former vice president, who built his career as a moderate who could work with Republicans. He appeared to target one of their disconnects with Biden when he directly addressed his age.

"I'll be honest, and hope Joe doesn't take offense," he said. "Joe's been around a while. Sometimes what happens is we take that for granted.

"There's a tendency to always look for the new and shiny object. But for my money one of the things that counts the most is to have somebody, whatever mistakes they've made or hardships they've gone through, have they shown the kind of character that stands up," he said. "And my experience with Joe Biden is that's who he is."

It was largely based on their eight-year partnership that Biden was able to make deeper inroads with the older black voters who helped turn around Biden's campaign and make him the presumptive Democratic nominee. While Biden has talked broadly about the eight years he was vice president, Obama is expected to offer more fulsome testimonials.

Throughout the Democratic primary, Obama was careful to remain neutral - although Biden at times tested the limits, at one point running an ad showing Obama bestowing the Medal of Freedom on Biden. The former president met with many of the two dozen candidates running, and was a frequent behind-the-scenes confidant of several, including his former vice president.

After Sen. Bernie Sanders, I-Vt., suspended his campaign in April, Obama released a lengthy video endorsing Biden. In the video, he reflected on the shifts within the party he once led and called for more assertive action.

"To meet the moment, the Democratic Party will have to be bold," Obama said. "I could not be prouder of the incredible progress that we made together during my presidency. But if I were running today, I wouldn't run the same race or have the same platform as I did in 2008. The world is different. There's too much unfinished business for us to just look backwards. We have to look to the future."

Obama has also been at the forefront for Trump, who has had a years-long obsession with his predecessor, first stoking racist theories about Obama's citizenship and demanding his birth certificate. As president, Trump has attempted to dismantle as much of Obama's agenda as possible. For weeks he has touted an ill-defined conspiracy theory he called "Obamagate," and this week he accused the former president of "treason."

"It's treason," Trump told CBN News, claiming without evidence that Obama was spying on his campaign. "Look, when I came out a long time ago, I said they've been spying on our campaign. . . . It turns out I was right. Let's see what happens to them now."

Justice Department Inspector General Michael Horowitz said last year he found no evidence that the FBI under Obama had wiretapped the phones at Trump Tower during the 2016 campaign.

Trump can use opposition to Obama to mobilize his supporters - on Tuesday his campaign sent out a fundraising email with sirens and the subject line "BARACK OBAMA" - but Obama is generally viewed favorably by most Americans. A recent Fox News poll had Obama with a net favorability of 28 points, compared with minus-12 points for Trump.

Obama has recently shed some of his reluctance to engage in national politics, sharply criticizing Trump's handling of the coronavirus pandemic last month by calling it "an absolute chaotic disaster" during a call with a network of former staffers and supporters. On the call, he also criticized the Justice Department's decision to drop charges against Michael Flynn, who served as Trump's first national security adviser, saying that it was "the kind of stuff where you begin to get worried that . . . our basic understanding of the rule of law is at risk."

Senate Majority Leader Mitch McConnell, R-Ky., said the move was "a little bit classless" and suggested Obama should have "kept his mouth shut."

Obama later delivered a virtual commencement address as part of a prime-time special that some pointed to as a potential test run for a Democratic National Convention, in part because it had the slick and innovative production that Biden's campaign has often lacked.

Obama seemed to allude to Trump then by telling graduates that "this pandemic has fully, finally torn back the curtain on the idea that so many of the folks in charge know what they're doing."

Obama is expected to ramp up his campaign activities over the coming months, with those close to him pointing to his 2018 involvement as a template: He spent the summer raising money before doing two rounds of endorsements and stumping in 11 states as Election Day neared.

Those close to him are closely monitoring the novel coronavirus and still trying to determine what types of in-person events may be able to be safely conducted.

As Biden undertakes his own search for a running mate, he has spoken with Obama about how the process led him to be picked nearly 12 years ago. Biden often talks about wanting someone who is "simpatico" with him but seems to forget that he and Obama had a rocky start to their partnership before their mutual respect formed.

"I've always said that vice-presidential picks are shotgun weddings, and they often don't turn out well," Axelrod said. "But this one turned out to be a love story. They became not only good partners but really good friends."

He added: "Biden was, in my view, almost the ideal vice president. He was impeccably loyal in public and very honest in private with his advice and his counsel. And he took on a lot of tough assignments for Obama."

Last week, Obama tagged Biden in a tweet as he responded to the Supreme Court ruling that Trump could not halt the Obama-era Deferred Action for Childhood Arrivals program, which allows some immigrants brought to the United States as children to remain in the country legally.

"The more creative ways we can drive people to Biden - that's something we're interested in doing," said a person close to Obama, who spoke on the condition of anonymity to discuss the matter frankly.

Still, Obama's appeal has not always transferred to other candidates. Under him, Democrats lost control of the House in 2010 and of the Senate in 2014. He also campaigned frequently for Hillary Clinton in 2016.

While Biden has often spoken fondly of Obama, he has generally avoided taking ownership of the more controversial aspects of Obama's decisions. During the primary campaign, he sidestepped some of the criticism over the former president's deportation policies.

Obama and Biden have not shared a stage together in quite some time, and the last time they met together in public may have been in July 2018 when they dropped in for lunch at the Dog Tag Bakery in Georgetown.

They both attended graduation last June at Sidwell Friends School, where Obama's daughter Sasha and Biden's granddaughter Maisy were among the graduates. They sat separately during the ceremony, but their families later gathered together privately. They also both attended the funeral of Rep. Elijah Cummings, D-Md., in October.