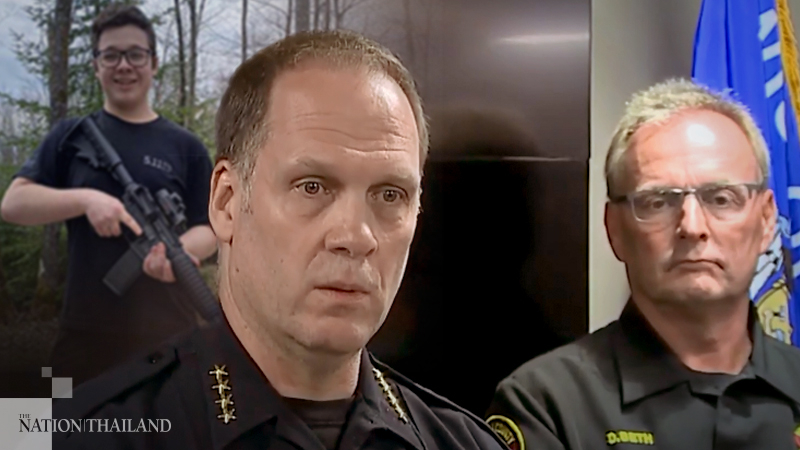 Before a fatal shooting, teenage Kenosha suspect idolized the police

Before he took his rifle and drove 20 miles up the road to confront the unrest in Kenosha, Wis., Kyle Rittenhouse seemingly idolized one thing: the police.

Growing up in Chicago's far northern suburbs, the 17-year-old shadowed local law enforcement, filling his social media feeds with posts declaring that "Blue Lives Matter" and photos of himself posing with guns.

On Tuesday night, Rittenhouse was with fellow armed men self-appointed to protect the streets of a city aflame, insisting he was there to render first aid and protect a business. But asked by a reporter to clarify whether his role was "nonlethal," he cradled his weapon and pointedly disagreed.

"We don't have nonlethal," Rittenhouse said.

Now the teen is in custody, suspected of shooting three people, two of whom died. Instead of helping to keep the peace, authorities say, Rittenhouse turned an already chaotic situation into a murder scene.

Tuesday night's killings were the most violent fallout to date from the Sunday wounding of 29-year-old Jacob Blake, a Black man who is now paralyzed from the waist down after being shot seven times by a police officer.

The incident transformed Kenosha - a modest lakeside city of 100,000 - into America's newest symbol in the national movement against police brutality and systemic racism.

The summer-long uprising spawned protests from coast to coast, including high-profile boycotts by professional athletes, while becoming a flash-point in the home stretch of the presidential campaign. In Kenosha, peaceful mass demonstrations have been accompanied by destructive riots in which stores were looted and businesses burned.

Rittenhouse was charged Thursday with six counts - including two homicide charges - in a criminal complaint accusing him of killing Joseph Rosenbaum, 36, and Anthony Huber, 26, amid the unrest in Kenosha on Tuesday night.

According to the complaint, investigators reviewed multiple videos recorded on cellphones that showed Rittenhouse - carrying a gun they later identified as an AR-15-style rifle - on the streets of Kenosha.

At a news briefing on Thursday, local law enforcement officials praised the demonstrations held the night before, describing them as much calmer than the chaos on Kenosha's streets earlier in the week. Both police and the self-described militia members who were ever-present Tuesday mostly stayed away from protesters Wednesday night.

The night's demonstrations began hours after authorities named Rusten Sheskey as the officer who shot Blake, and announced an arrest on a homicide charge for Rittenhouse, who attended the protest with a group of armed men who claimed to be protecting a service station.

Sheskey - a seven-year veteran of the department - and two other officers have been placed on leave amid the state investigation into Blake's shooting.

The Wisconsin Department of Justice, which is investigating Blake's shooting, said he acknowledged after that he had a knife in his possession. Investigators later found a knife on the floor of his car. It is unclear whether Sheskey or any of the other officers knew about the knife during the shooting.

In an interview last year with the Kenosha News, Sheskey spoke about working in the police department's bike unit and described policing as "a huge responsibility" in trying to help people.

It is not clear precisely what fed Rittenhouse's attraction to the police, which also appears to have extended to the military.

He had attempted to join the Marine Corps in January, but was disqualified from serving after discussing his options with recruiters, said service spokeswoman Yvonne Carlock. She declined to specify why he was disqualified, citing the service's privacy guidelines.

Rittenhouse lived across the state border in the Illinois village of Antioch. Accounts from neighbors and local institutions paint the picture of a high school dropout who viewed law enforcement officers as his personal heroes.

So much so that, when the unrest broke out in Kenosha, he crossed state lines to offer his presence as an armed supplement to overwhelmed local police departments. Speaking to reporters who recorded his statements, he suggested their duties were his, too.

He showed off his medical kit, and said he was providing first aid. He was also, he said, guarding private property.

"Part of my job also is to protect people," Rittenhouse told the Daily Caller moments before he allegedly began shooting. "If someone is hurt, I'm running into harm's way. That's why I have my rifle. I've got to protect myself, obviously."

Other armed men in Kenosha were attached themselves to groups with varying motives and ideologies. None of the groups have claimed Rittenhouse as a member.

The armed men were welcomed by police, who thanked them for being in the city - despite the fact that they were violating Kenosha's curfew - and passed out water bottles in gratitude.

"We appreciate you guys," one officer tells the men in a live stream video published online. "We really do."

But the protesters - both peaceful and violent - were far less welcoming of the men with guns.

"I just got pepper sprayed by a person in the crowd," Rittenhouse, his eyes watering, told a reporter for the Blaze, during a video recorded before the shooting Tuesday night.

The shooting began with an apparent scuffle at a service station, where armed men and protesters had been in a tense standoff that included pushing and epithets.

In videos of the scene, shots are fired and a man - later identified as 36-year-old Joseph Rosenbaum - falls to the ground with a gunshot to the head that would prove fatal.

A man whom police believe to be Rittenhouse takes out a cellphone, dials and says, "I just shot someone." He then runs.

The shooter is pursued by a number of protesters, including at least one armed with a handgun. When he stumbles, several people rush to try to seize his rifle. One smacks him with a skateboard. But he immediately regains his footing, and starts firing.

Anthony Huber, 26, of Silver Lake, Wis., was killed. Gaige Grosskreutz, 26, of West Allis, Wis., was shot in the arm and is expected to recover.

Video then shows the shooter attempting to surrender to police, only to be ordered off the streets as vehicles continue moving toward the scene.

Authorities believe he then drove back to Antioch, where he was arrested the following day.

Before the deadly shooting, Rittenhouse lived with his mother, Wendy Rittenhouse, a single mom and nurse's assistant, in a quiet apartment complex beside a park in Antioch, a bedroom community that sits just south of the Wisconsin border.

According to court records reviewed by the Chicago Tribune, Wendy Rittenhouse sought an order of protection from police in January 2017, claiming that a classmate of her son's had been threatening him and calling him "dumb" and "stupid." The Washington Post was unable to reach her for comment.

Jim McKay, the superintendent for the school district that includes Antioch, said in a statement to The Post that Rittenhouse attended Lakes Community High School for a semester in the 2017-18 school year and did not re-enroll afterward. Two unnamed neighbors told the Chicago Sun-Times that he had dropped out of Lakes.

Outside school, Rittenhouse participated in cadet programs with both the Antioch Fire Department and the Grayslake Police Department, according to department newsletters. The police initiative offers participants from ages 14 to 21 "the opportunity to explore a career in law enforcement" through ride-alongs with officers on patrol and firearms training, according to since-deleted pages on its website.

Philip Perlini, the Grayslake police chief, declined to comment to The Post but said his agency was cooperating with an investigation by the FBI and Kenosha police.

More recently, Rittenhouse worked as a part-time lifeguard at a YMCA in Lindenhurst, Ill., the Tribune reported. Man-Yan Lee, a representative for the organization's metro Chicago branch, said in a statement to The Post that Rittenhouse was furloughed in March.

A few weeks earlier, he attended a Trump rally in Des Moines, Iowa, sitting in the front row and posting a TikTok video from the Jan. 30 event, BuzzFeed News reported. The video, which has since been deleted, appeared to match C-SPAN footage of Rittenhouse standing just to the left of the lectern.

The Trump campaign distanced itself from Rittenhouse and his video late Wednesday, with spokesman Tim Murtaugh telling The Post that the president had "repeatedly and consistently condemned all forms of violence."

"This individual had nothing to do with our campaign," Murtaugh said, "and we fully support our fantastic law enforcement for their swift action in this case."

Trump on Thursday ignored a question about Blake, whose shooting he has not directly commented on. His rival, Democratic nominee Joe Biden, has expressed solidarity with peaceful protesters while condemning the riots.

The public posts on Rittenhouse's Facebook are almost entirely dedicated to honoring police, with Blue Lives Matter graphics, photos of officers killed in the line of duty, and the "thin blue line" flag associated with support for law enforcement.

In December 2018, he started a Facebook fundraiser for Humanizing the Badge, a nonprofit that Rittenhouse said looks to "forge stronger relationships between law enforcement officers and the communities they serve."

On Wednesday afternoon, Antioch police stationed vehicles inside the apartment complex where Rittenhouse has a listed home address, allowing only residents to enter the buildings and walk through the parking lot.

Tammy Blanton, 34, who lives a four-minute walk away, said the arrest at the complex stunned her, particularly because Rittenhouse is about the same age as two of her children.

"I never see any cops around, I never hear any bad news. It's a very quiet town," she said.

Standing with her son on the sidewalk across from Rittenhouse's apartment complex, Blanton said Rittenhouse seemed to have crossed a line.

"Maybe he thought he was doing the right thing, but you don't kill somebody," she said. "That's not your business to kill someone for messing with someone else's business. That's for the cops to deal with."