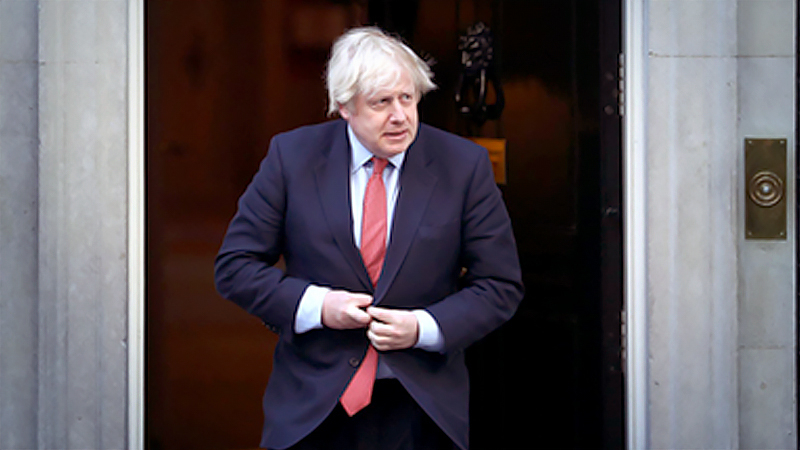 Two of Boris Johnson's senior ministers laid bare the competing pressures facing the U.K. government as it attempts to drag the economy out of its worst recession in at least a century without triggering a new wave of coronavirus infections.

Hours after Foreign Secretary Dominic Raab on Sunday reiterated the government's push to "get people back to work" and lamented the damage done by locking down the economy, Health Secretary Matt Hancock warned that a recent spike in coronavirus cases among young people could "lead to the sort of problems that we saw earlier in the year."

The surge risks undermining the government's push to encourage people back to their workplaces after schools reopened across England last week. But it's also a sign of how the next couple of months threaten to play out for Johnson's administration, amid warnings from medical officials about a potential resurgence of covid-19. On Monday, Environment Secretary George Eustice said the government wants to avoid a second national lockdown "at all costs" -- but wouldn't rule one out.

"What we've developed since the original lockdown is much more targeted local lockdowns," Eustice told Sky News. "The idea of going into a total national lockdown again is something we don't want to do. The impacts on our economy are significant."

The U.K. reported 2,988 new coronavirus cases on Sunday, a 64% jump from the previous day and the highest level since May 22. That was despite the number of new cases typically dipping on the weekends when reporting is more limited -- the average was about 1,600 new cases a day in the past week.

Johnson has pledged that any measures to kick-start the economy must be "Covid-secure," so the sudden increase is likely to trigger further pushback from labor unions and workers over pressure to return to the workplace.

But a report by accountancy firm PwC published on Sunday showed the annual economic cost to the U.K. from people working remotely could be 15.3 billion pounds ($20.2 billion) due to lower spending from workers who are at home, and the knock-on impact on those who rely on them for business.

The threat of a no-deal Brexit could saddle Johnson's government with an added challenge in turning the economy around. Carmakers, for example, have warned that the burden of higher tariffs or border disruptions would make British plants less competitive. On Monday, Nissan said it would hold off on a 400 million-pound investment at its Sunderland factory to make the next version of its Qashqai sport-utility vehicle.

Nissan said in February that making cars in the U.K. "would not be viable" with the 10% tariff that would be triggered without a U.K.-EU trade deal. The Financial Times reported earlier that production of the Qashqai, originally slated for October, was delayed until after April, when new trade terms are clear.

Johnson is also facing calls from members of his Conservative Party to explain how the government will pay for various stimulus measures introduced during the pandemic.

There has been fierce debate about the effectiveness of raising taxes to tackle borrowing in the U.K, as policymakers face the challenge of reining in debt that's ballooned to more than 2 trillion pounds for the first time.

Chancellor of the Exchequer Rishi Sunak has promised Tories there would be no "horror show" of tax rises but left himself room for temporary hikes to pay the pandemic debts.

Sunak and Johnson will try to keep voters onside with a plan to cut personal taxes ahead of the country's next general election -- due in 2024 -- the Sunday Times reported, without saying where it got the information.

Sunak is expected to say that the government must raise funds to pay for stimulus packages, with November's budget likely to increase the burden on high-wage earners, according to the report. Tax cuts may then be implemented in 2023 or 2024.

There are also different groups demanding for spending. On Monday, a group of 40 Conservative MPs plan to present a "Leveling Up Taskforce" to promote the case for the government's key election pledge to boost deprived regions of the U.K. The group, which includes some Tories elected for the first time last year to seats typically held by the opposition Labour Party, cited research showing average earnings in Conservative districts are now lower than in Labour-held areas.

"The coronavirus crisis has only made the case for leveling up stronger so we can get the economy moving in areas that are less well off," MP Neil O'Brien said in an emailed statement. "Our new task force will be spearheading this vital agenda."

Meanwhile MakeUK, which represents U.K. manufacturers, on Monday called on Sunak to emulate Germany by extending the government's furlough program beyond October -- something the chancellor has repeatedly refused to do.

"We do need to get people back to work," Raab told the BBC on Sunday. "It is important to send the message that we need to get Britain back up and running, the economy motoring on all cylinders."