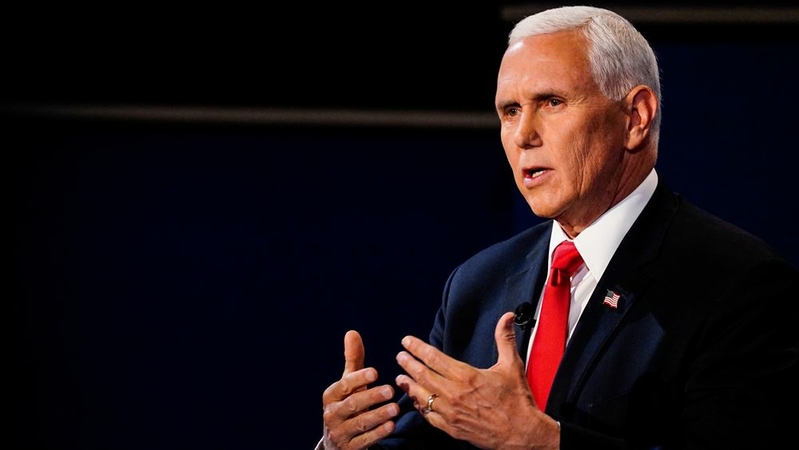 Senior officials have discussed removing Trump under the 25th Amendment. Here's how that could work.

Hours after a pro-Trump mob incited by the president stormed the Capitol, dozens of Democrats demanded that he be removed under the 25th Amendment - an unprecedented option being seriously discussed late Wednesday by senior administration officials alarmed at Trump's conduct.

The amendment, which can remove a president "unable to discharge the powers and duties of his office," has only been used briefly for medical events, as when President Ronald Reagan underwent colon surgery.

But some politicians and experts argue that Trump has met those standards by encouraging violence through his incendiary rhetoric and by refusing to accept the reality of his defeat.

"President Trump revealed that he is not mentally sound and is unable to process and accept the results of the 2020 election," Democratic members of the House Judiciary Committee wrote to Vice President Mike Pence on Wednesday. "President Trump's willingness to invite violence and social unrest to overturn the election results by force clearly meet this standard."

Although the amendment has never been used in these circumstances, some experts say it could provide a faster and more realistic path than impeachment to quickly remove Trump from power. That would all depend, though, on the backing of Pence and the Cabinet.

So how would it work?

The amendment, which was ratified in 1967 after concerns about the order of succession after John F. Kennedy's assassination, would allow Pence and a majority of the Cabinet to declare that Trump is unfit for duty. They would then send a letter to Congress about their decision.

At that moment, said Erwin Chemerinsky, dean of the University of California at Berkeley's School of Law, Pence would assume the powers of the presidency. If Trump were in a coma or otherwise incapacitated, Pence would keep that power indefinitely.

But the amendment also gives Trump the power to object by writing his own letter to Congress - an action that would immediately restore his powers. If that happened, though, Pence and the full Cabinet would have four days overrule him. (There's no agreement on who would be in power for those four days, The Washington Post's Philip Bump reported. The amendment is unclear and would likely have to be tested in court.)

If Pence and the Cabinet did overrule Trump, Congress would be called on to decide the dispute. Pence would remain in power in the meantime.

That's where the timing gets interesting. The amendment orders Congress to convene within 48 hours to decide on whether to boot the president - but then it gives lawmakers 21 days to make a decision.

Affirming Pence's move would require a two-thirds majority of both the House and Senate. That's an unlikely result, considering a majority of House Republicans voted early on Thursday to back Trump's electoral objections.

But if the House and Senate leadership simply stalled the vote, they could effectively run out the clock on Trump's term, leaving Pence in charge until President-elect Joe Biden's inauguration on Jan. 20, Chemerinsky said.

"Pence would be the president for that time," he said.

Impeachment, by contrast, would be extraordinarily difficult to push through the House and a Senate trial by Jan. 20, Chemerinsky said. (Unlike impeachment, the 25th Amendment can't actually remove Trump from office - instead, it would delegate his powers to Pence.)

That's not to say that Pence or the Cabinet would ever embrace removing Trump under the 25th Amendment. While senior aides did discuss the option on Wednesday, those talks were informal and no concrete plans were in the works, The Washington Post reported.

If the aim is to avoid further violence and turmoil, Pence and the Cabinet would have to weigh whether removing Trump early would actually accomplish that, Chemerinsky said.

"Do they perceive Trump as so dangerous in the next 13 days that he needs to be gone immediately?" Chemerinsky said. "Or do they think this would just divide the country even further and make him into a martyr?"