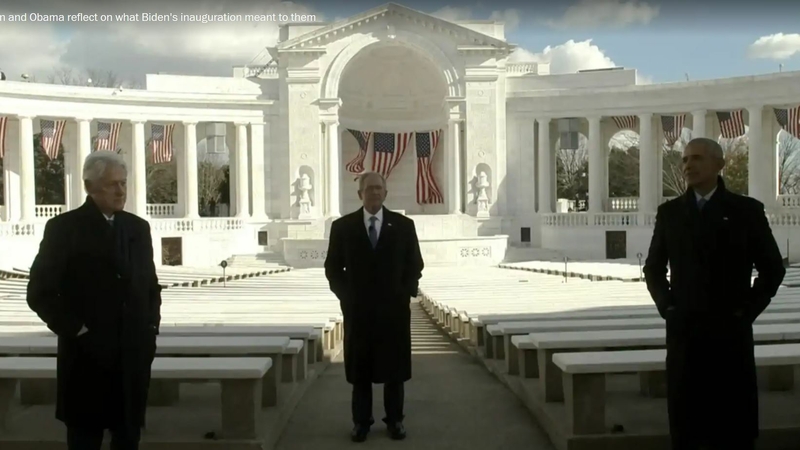 Standing in the Memorial Amphitheater at Arlington National Cemetery alongside his two predecessors in the White House, former president Barack Obama noted that inaugurations are central to American democracy.

"Inaugurations signal a tradition of a peaceful transfer of power that is over two centuries old," Obama said in a joint video released late Wednesday with former presidents George W. Bush and Bill Clinton.

Although former president Donald Trump's name was never uttered in the nearly three-minute clip, it served as an unsubtle rebuke to the latest member of the ex-presidents club, who has spent months torpedoing the norms surrounding the peaceful transfer of power.

"It was a reminder that we can have fierce disagreements and yet recognize each other's common humanity, and that as Americans we have more in common than what separates us," Obama said.

Trump became the first commander in chief in more than 150 years to skip his successor's inauguration, which was heavily guarded by the military after a mob provoked by Trump stormed the Capitol earlier this month in an attempted insurrection.

In his farewell speech on Wednesday morning, Trump never mentioned Biden's name, although he did wish the "new administration great luck and great success." Biden said he still hasn't spoken to Trump, but told reporters that his predecessor did leave him a "very generous" letter, following one tradition after ignoring many others.

In the video, the former presidents presented a starkly different vision of bipartisan cooperation - one that echoed Biden's calls for unity in his inaugural address. Bush, the sole Republican standing between the two Democrats, noted that their mere presence together sends a vivid message.

"The fact that the three of us are here talking about a peaceful transfer of power speaks to the institutional integrity of our country," he said.

Clinton suggestedBiden's win opened opportunities for America to change for the better.

"This is an unusual thing. We are both trying to come back to normalcy, deal with totally abnormal challenges, and do what we do best, which is try to make a more perfect union," he said. "It's an exciting time."

All three ex-presidents urged Americans to find ways to talk in a moment when the nation is politically fractured.

Bush added that "if Americans would love their neighbors like they would like to be loved themselves, a lot of the division in our society would end."

These three former presidents, Obama stressed, stood ready to help Biden however they could.

"You've got all of us here rooting for your success," he said. "We will be available in any ways that we can as citizens to help you guide our country forward."