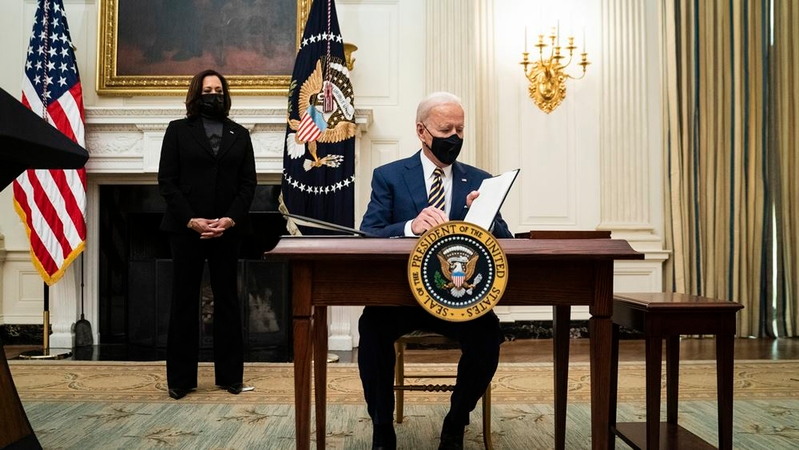 And on Feb. 17, Obama and his vice president, Joe Biden, flew to Denver to sign the roughly $800 billion Recovery Act, the finale of a rapid-fire first few weeks.

"Less than a month into his presidency, the president is about to sign into law what is, I believe, a landmark achievement. Because of what he did, America can take a first, very strong step leading us out of this very difficult road to recovery we find ourselves on," Biden said that day.

That's how Democrats came out of the gate the last time they controlled Congress and the White House. They orchestrated their first few weeks the way a smart football coach scripts his offense's first few possessions of the ball, winning quick passage of key laws and setting the tone for the first two years of the Obama presidency.

Twelve years later, the early days of Biden's presidency may be consumed by a host of side issues that could delay his Cabinet appointments and, more importantly, any legislative victories. No issue has emerged as a bigger obstacle than the impeachment trial of former president Donald Trump.

Republicans warned that would mean the Senate would stop all business until it completes the trial.

"If the impeachment articles come over Monday, the opportunity for President Biden to get a Cabinet in place is done until impeachment is done," Sen. John Barrasso, R-Wyo., told reporters Friday.

By Friday afternoon, Biden signaled some concern about a trial getting in the way of his early work. Hours later, Schumer announced a bipartisan plan to start the full trial Feb. 9, giving the Senate more than two weeks to get moving on confirming the Cabinet.

Still, there's little time to get any legislative victories. Pelosi set the coming week as committee work, with no votes on legislation, leaving only a week with both chambers in session before the trial begins.

Biden and some senators have discussed a "bifurcated" setup, doing legislation or nominations in the mornings, before the 1 p.m. mandate to start each day's trial proceedings. History suggests that's unlikely.

The previous two presidential impeachment trials, of Bill Clinton in 1999 and of Trump in 2020, lasted five weeks and nearly three weeks, respectively. No other business was conducted as the trials consumed the Senate.

As much as they want to punish Trump for encouraging his supporters to descend on the Capitol, some Democrats grimace at the idea of putting Biden's early days on hold for a man already ejected from the Oval Office.

"I want to focus as much attention right now on the Biden agenda as possible, and minimize the attention on anything other than the Biden agenda," said Sen. Tim Kaine, D-Va., his party's 2016 vice-presidential nominee. He would prefer to punish Trump with legislation to bar him from holding office in the future.

"It would give us more time to focus on the things that are most important to the public," Kaine told reporters Friday.

Pelosi and Schumer have set up a timeline that will allow for the most critical Cabinet posts to be filled, but with little chance for substantive victories emerging from Congress. Biden has issued more than two dozen executive orders, some reversing controversial decisions by Trump, but nothing with the full force of an actual law.

Back in early 2009, Democrats did not face an impeachment dilemma. They were able to begin immediately moving initiatives that had been stalled during George W. Bush's presidency. In an April 2017 interview, Rahm Emanuel reflected on those early Obama days when he was chief of staff, how even some of the less ambitious legislation helped keep momentum going.

"The bunt singles," he said, explaining how any bill getting to the president's desk helps.

Emanuel, then the Chicago mayor, was critiquing the first months of the Trump administration, arguing that they kept swinging for legislative home runs but striking out.

So far, that critique applies to the Biden White House and his Democratic allies.

There are no "bunt singles" waiting on the legislative deck. Instead, the leaders are trying to pack everything they can into one massive package, with a current price tag of $1.9 trillion, dwarfing the combined annual funding for every federal agency, and whatever can't fit into that package will go into another massive bill later in the fall.

This isn't just swinging for the home-run fences. It's akin to trying to hit 10 grand slams with just two swings of the legislative bat.

Part of the Democratic dilemma is their minuscule margin for error. Their current House majority has 35 fewer seats than in early 2009 and, with just 50 members in Schumer's caucus, they have eight fewer votes to bank on than in early 2009.

Back then, Biden got dispatched to lobby old friends such as Sen. Susan Collins, R-Maine, who rallied two other Republicans to pass the Recovery Act.

Now, even Collins is shrugging at the need for Biden's nearly $2 trillion pandemic relief proposal. "It's hard for me to see, when we just passed $900 billion worth of assistance, why we would have a package that big. Now maybe a couple of months from now, the needs will be evident," Collins told reporters Friday.

So, in this polarized environment, congressional leaders try to pack everything they can into one massive, grand-slam legislation, everything from actual coronavirus relief to raising the minimum wage.

Even without the impeachment trial, mid- to late February would have been optimistic to pass the initial massive Biden package. Now, with the trial potentially sidelining Senate action until the end of February, Biden will have to wait quite a while before a big win.