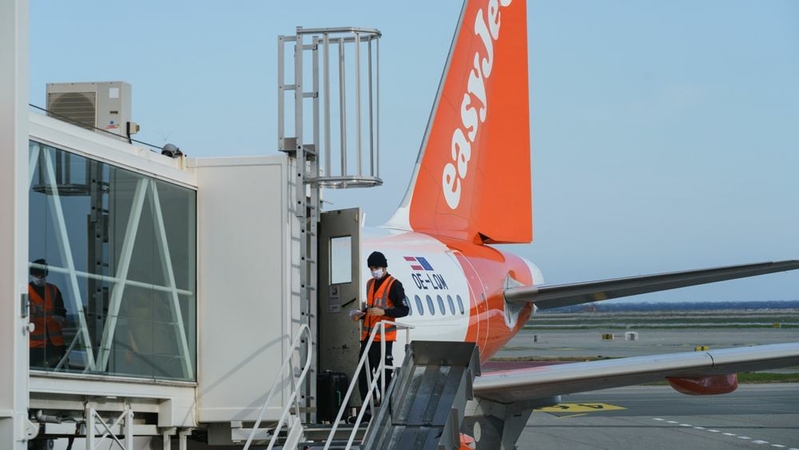 EasyJet ticket sales more than quadrupled in the hours after Johnson said Monday that international trips may restart as soon as May 17. Tour operator TUI said holiday bookings to Spain, Turkey and Greece jumped sixfold overnight, while Ryanair Holdings cited Italy as another popular destination.

Airline shares advanced for a second day as evidence mounted of burgeoning customer demand for the crucial summer season. While travel could open as soon as late May or June, travelers are hedging their bets, with the uptick concentrated on July and August. Price-comparison site Skyscanner said that flight bookings on Monday increased by 69% compared with the previous day.

"We are seeing this latest news translate into a surge in travel demand," said Hugh Aikten, vice president of flights at Skyscanner. Ultimately, he said, further steps will be needed to truly unlock demand, "including greater global alignment on common, international standards to enable people to plan."

Shares of EasyJet rose as much as 12% in London on Tuesday, a day after gaining 7.3% in response to Johnson's plan to gradually reopen the economy. TUI surged as much as 7.3% and Jet2 10%, while Ryanair and IAG, owner of British Airways, also added to Monday's gains.

U.K. hotel operators such as Whitbread and InterContinental Hotels Group meanwhile rose in anticipation of a pickup in internal. Hotels could reopen May 17, a month after campsites and self-catering accommodation.

Britain has established a task force that will set out a roadmap for when international travel might resume, with a report due by April 12. Questions still remain about requirements for testing and quarantines.

Sunny spots such as Malaga, Alicante and Palma in Spain, Faro in Portugal and the Greek island of Crete are among top destinations, EasyJet said. While travel may reopen sooner, August is the most popular period.

Bookings from Britons have begun to surge at the 21-floor Madeira Centro Hotel in Benidorm on Spain's Costa Blanca, according to commercial manager Juan Natera, who said that reservations are strong for August and September, extending into the fall.

Michalis Vlatakis, president of the Association of Cretan Tourism and Travel Agencies, said that restarting travel will depend on the roll-out of vaccinations and decisions by Greek authorities, he said.

"Tourism is psychology and the right psychology must be created for people to travel," Vlatakis said.

While the U.K. ticket sales validate optimism for customer demand, the outlook for travel in the early part of summer remains cloudy.

TUI will seek to encourage customers to take a break after May 17, when the current ban on tourist travel potentially ends, by extending a policy allowing them to rebook for free until the end of June.

"We will continue to work closely with the government so people can look forward to a well-deserved break away, after what has been a very difficult year for many," said Andrew Flintham, managing director of TUI UK and Ireland.