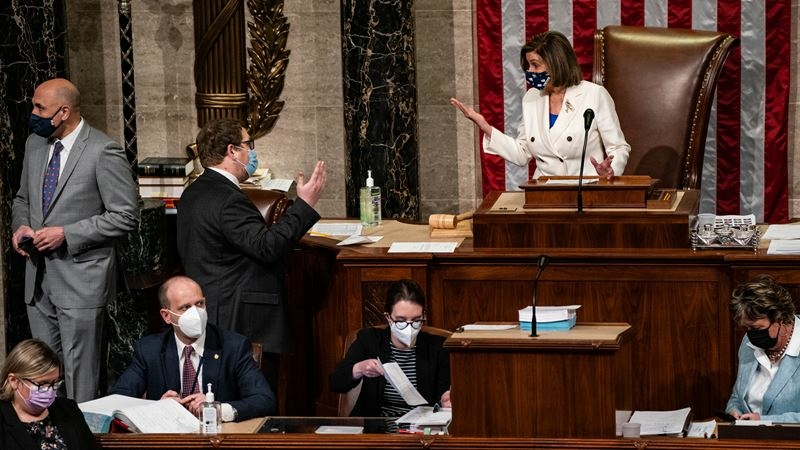 WASHINGTON - Congress approved a sweeping $1.9 trillion coronavirus relief package on Wednesday, authorizing a flurry of new federal spending and a temporary yet dramatic increase in anti-poverty programs to help millions of families still struggling amid the pandemic.

The 220-to-211 vote in the House of Representatives almost entirely along party lines sends to President Joe Biden's desk one of the largest economic rescue packages in U.S. history, which Democrats had promised to pass as one of their first acts of governance after securing narrow but potent majorities in Washington during the 2020 presidential election.

The bill, dubbed the American Rescue Plan, authorizes another round of stimulus payments up to $1,400 for most Americans; extends additional, enhanced unemployment aid to millions still out of work; and makes major changes to the tax code to benefit families with children. It couples the new pandemic relief with what Democrats have come to describe as one of the most robust legislative responses to poverty in a generation, seeking to assist low-income families who struggled financially long before the coronavirus took root.

Lawmakers also set aside tens of billions of dollars to fund coronavirus testing, contact tracing and vaccine deployment, as they aim to deliver on Biden's recent promise to produce enough inoculations for "every adult in America" by the end of May. The stimulus bill approves additional money to help schools reopen, allow restaurants and businesses to stay afloat, and assist state and local governments trying to meet their financial needs.

"The Biden American Rescue Plan is about the children, their health, their education, [and] the economic security of their families," said House Speaker Nancy Pelosi, D-Calif., just before lawmakers gave the bill a final green light, prompting cheers among Democrats in the chamber. "This legislation is one of the most transformative and historic bills any of us will ever have an opportunity to support."

Republicans banded together in opposition on Wednesday, much as they had against an earlier version of the proposal in the House last month and the Senate bill's over the weekend. The GOP approach evinced the tough political climate that Biden is likely to face even after preaching political unity upon taking office. Partisan tensions threaten to overshadow his expected work in the coming months to shepherd major new investments in infrastructure, overhaul the immigration system and rethink other elements of the U.S. tax code.

"This isn't a rescue bill; it isn't a relief bill; it is a laundry list of left-wing priorities that predate the pandemic and do not meet the needs of American families," House Minority Leader Kevin McCarthy, R-Calif., said earlier in the debate.

The bill now heads to Biden, who is expected to sign it Friday, White House press secretary Jen Psaki said. The signing comes a day after the president is set to deliver his first prime-time television address on the country's response to the pandemic. Wall Street appeared to acknowledge the news, as the Dow Jones industrial average continued to climb and was about 529 points by the early afternoon.

"For weeks now, an overwhelming percentage of Americans - Democrats, Independents, and Republicans - have made it clear they support the American Rescue Plan. Today, with final passage in the House of Representatives, their voice has been heard," Biden said in a statement.

"This legislation is about giving the backbone of this nation - the essential workers, the working people who built this country, the people who keep this country going - a fighting chance," he added.

With the American Rescue Plan, lawmakers adopted their sixth major coronavirus relief package since the pandemic first encroached on the country roughly a year ago.The sheer vastness of aid Congress has adopted to date reflects the contagion's toll, with 29 million cases, more than 527,000 deaths, and deep economic scars, including 10 million fewer jobs than at the start of the crisis.

The situation appeared especially grim in January, prompting Biden to put forward the first details of his nearly $2 trillion stimulus before he officially entered the White House. Since then, though, infections have ticked downward, and vaccines have reached Americans more efficiently. More workers have returned to their jobs, sparking concern among some lawmakers and economists that the new stimulus may be mismatched for the moment.

Still, Democrats say the rate of recovery has not been fast or robust enough, and they stress that the $1.9 trillion package given a final green light in the House on Wednesday will prevent the economy from backsliding. In doing so, some party leaders have sought to shift their messaging, seizing on the fact that the stimulus doubles as an attempt to help Americans who were struggling long before the coronavirus took hold.

The newly adopted legislation includes another round of $1,400 stimulus checks, which Biden and his top aides have said should reach a large number of Americans by the end of the month. Democratic leaders pledged to authorize the payments in the final days of the 2020 campaign, seizing on the highly popular idea to give them an electoral boost in Georgia, where they later picked up two Senate seats and ultimately took control of the chamber.

Millions of Americans who were set to lose unemployment benefits in a matter of days now will received continued, enhanced federal payments of an extra $300 each week until early September. Many workers who collect unemployment also are set to receive a tax break on those benefits.

The new stimulus also includes a dramatic expansion of the child tax credit, for the first time seeking to send out periodic, perhaps monthly, payments to families with kids. Biden and his congressional Democratic allies have estimated the changes could cut child poverty by up to half.

The bill authorizes a wide variety of additional aid, including a $5 billion expansion to federal programs that help Americans afford food in the pandemic and a $7 billion effort to help students obtain Internet access. In total, it includes $1.8 billion in federal spending and is expected to add $1.85 billion to the deficit over the next 10 years, according to a congressional estimate.

In High Point, N.C., Sonya Roper said she's eager to start seeing some of the help show up in her bank account. The 51-year-old home health aide has seen her hours slashed, and her bills rise, while caring for four grandchildren who have been learning from home during the pandemic.

Roper said the forthcoming aid, including a $1,400 stimulus check, would help her cover much-needed car repairs. Her Honda Pilot has broken down twice and needs new tires, brakes and an oil change, forcing her to rely on her daughter's car. And she said the new child tax changes could prove instrumental once they're in place, allowing her to receive periodic payments because she claims her grandchildren as dependents.

Yet Roper fears all of the new money still might not be enough. "The $1,400 check comes months after the last stimulus, so all that check is going to do is help people catch up," she said, adding that she needs "something ongoing."

Democrats did not get everything they initially sought. An earlier version of the stimulus, which passed the House last month, coupled the aid with the first increase in the federal minimum wage in decades. The idea died in the Senate, where moderate Democrats proved unwilling to support the aggressive procedural maneuvering that would have been required to raise the hourly rate.

The changes at the time rankled some party lawmakers in the House, as liberals felt they had a broad mandate from voters in the 2020 election to enact sweeping economic overhauls. But Democrats soon lined up behind the bill anyway, stressing it still contained significant relief that promises to help families amid the pandemic.

"Today, we are putting money in the pockets of ordinary people, of poor people, of the middle class, and they will be an engine that creates a healthy, prosperous future for all of us," Rep. Jan Schakowsky, D-Ill., said during a speech on the House floor.

Only one Democrat voted against the measure: Rep. Jared Golden of Maine, who has said the party should have focused on a narrower measure targeting vaccine funding. In a statement describing his vote, he said that the Senate's changes did not assuage his concerns while removing elements he did support, including the increase to the minimum wage.

Republicans, meanwhile, sought to portray the bill as wasteful and unnecessary. They cited the fact that sums still remain from past congressional packages, including a nearly $1 trillion law adopted in December. And party leaders faulted Democrats for focusing relief on aid programs they say are not immediately related to the pandemic.

But Democrats countered that the absence of GOP support - after lawmakers crossed the aisle to approve prior stimulus packages - reflected the party's own political calculations.

"There's only one thing that's changed since we passed those first five bills," said House Majority Leader Steny Hoyer, D-Md. "The need is there, the virus is still with us, the economy is struggle, but now we have a Democratic president."