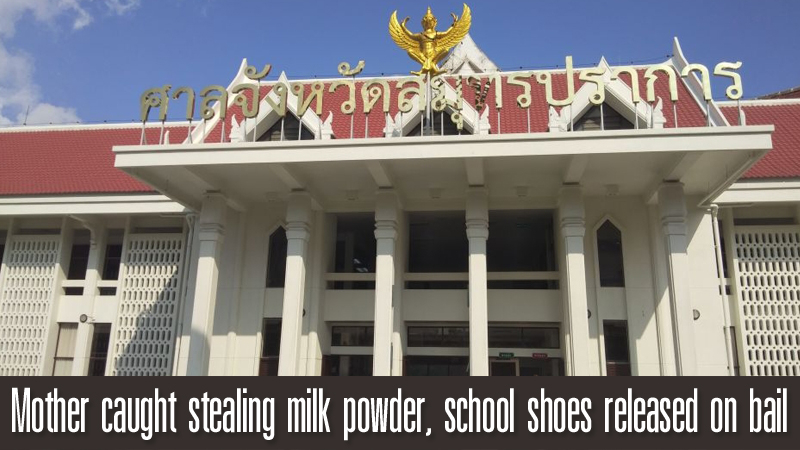 A mother of four who was caught red-handed stealing milk powder and school shoes for her youngest daughter has been released on bail.

The 35-year-old mother, a Si Sa Ket native whose name was withheld, was released from Samut Prakan prison Tuesday afternoon after Si Sa Ket MP Artsapol Santraipop of the Bhumjai Thai Party submitted a Bt100,000 cash bond for her temporary release.
The mother was arrested Saturday night while taking her five-year-old daughter to visit the superstore in Samut Prakan’s Samrong Nua district.
Security officers arrested her as she was trying to steal a pair of school shoes, some milk powder and two packs of Brand Vita drinks.
She said her husband had lost his job and with four children, she was unable to make ends meet and wanted the milk powder, the shoes and the drinks for her five-year-old daughter, her youngest child.
After she was released from the prison, the MP took her to her rented room near Suvarnabhumi Airport much to the joy of three of her children. The other child was still sleeping when she arrived home
The three older children apologized to the MP and accompanying reporters on behalf of their mother and promised that their mother would not do it again.
The mother cried and admitted to the MP that she led her youngest daughter to visit the store three times and was arrested on the third visit. On the first visit, she only window shopped, but stole six milk powder packs on the second visit.
“I did it because I didn’t have the money to buy milk for my child. I would like to issue an apology to society for acting as a bad example to my kids. I swear I won’t do it again,” the mother said, her tears flowing freely.