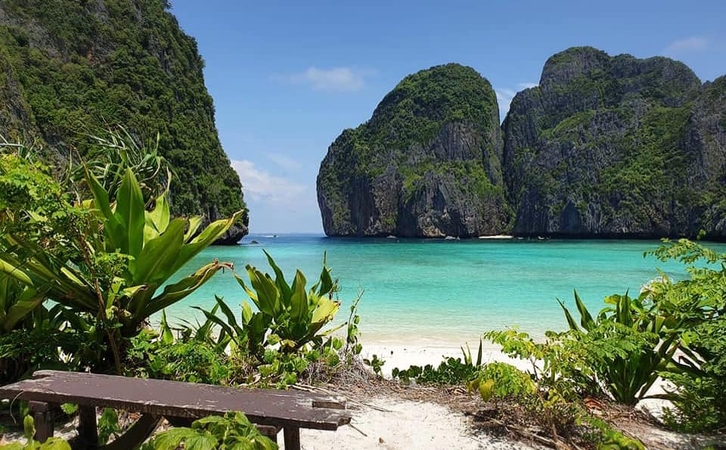 Maya Bay 'well on the road to recovery'

Coral reefs and ecosystems at the world-famous Maya Bay in the Andaman sea have been almost fully revived, but a date for its reopening to tourists has not been set.

“After being closed for many months to facilitate natural restoration, the beach's green forests have started to recover and coral reefs in the bay area have also been showing recovery and these are encouraging signs,” Thon Thamrongnawasawat, well-known Thai marine biologist, wrote on his Facebook page on September 25.

He praised the collaborative efforts for natural rehabilitation by many parties including nature conservation officials, staff of Kasetsart University, representatives from the private sector and volunteers.

There is still the problem of floating garbage spoiling coral reefs but the good news is that officials and volunteers are constantly collecting those garbages, he said.

As part of the two-year natural restoration plan, officials currently are working on the tourists' walk trail to ensure tourists do not damage trees. They are also arranging a new boat pier, ticket booking, tourist quota and other things, he said.

He expected the famous beach could be reopened for tourists uninterrupted. After that it should not be opened and closed from time to time as in the past, he said.

The bay has been closed since June 2018 after overcrowding by tourists damaged the bay environment. The authorities announced in May this year that it would be closed for two years to allow natural rehabilitation.

“This is the mission for the future to ensure that later generations would not condemn us (for destroying nature),” he wrote.

He did not speculate when the bay will reopen for tourists, but hinted that it would not be far away, saying that “new hope is approaching”.

Many who commented on his post were excited about the updates but some suggested that the bay remain closed for a more fewer years.