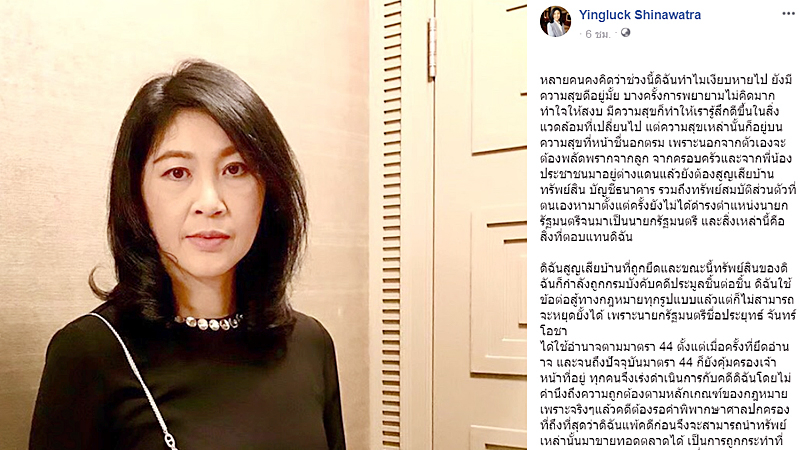 Former prime minister Yingluck Shinawatra complained through her Facebook page on Monday (December 16) about “double standards” being applied regarding her assets due to the “junta-backed government”.

Yingluck wrote that she was unhappy as she was separated from her son, family and supporters, as well as the assets she earned before becoming prime minister.
“My house was taken by the present government, while each asset was sold by the Legal Execution Department. I have used all legal procedures to fight for the assets but cannot stop those officers who carried out the operation without caring for the law, under Article 44 of the Interim Constitution of 2014,” she said.
“Prayut Chan-o-cha has used the article since he seized power and plunged Thailand into military rule,” she said. “Until now, the article has been effective, and those officers did not care that they cannot sell my assets unless I am judged by the Administrative Court as a lawsuit loser.”
Yingluck said her downfall was unlike other leaders' in history, and to “place the article’s privilege over the courts verdict is illegal”. For her, the article’s use over sovereign power was a destruction of fundamental people’s freedoms.
“I have fought for every asset including those was given by my parents, but I cannot protect even one of them,” she added. “Every time I heard that my assets were sold, I was deeply moved.”
Yingluck concluded her post by saying she will not be stuck in the past because there are many people putting their hope in her hands.
In 2017, the former prime minister and other defendants were accused of negligence in their official duties that led to corruption and massive financial damage to the state while implementing their government’s rice-pledging scheme.
Article 44 was invoked and Yingluck was found liable for damages caused to the state budget by the rice-pledging scheme. Her assets were frozen or seized by the Legal Execution Department.
She fled Thailand in August 2017, a few days before the Supreme Court’s Criminal Division on Political Office Holders was scheduled to deliver a verdict in the case against her.
In late September, News agencies reported that the Serbian government had announced that Yingluck had been granted Serbian citizenship and a passport in September.