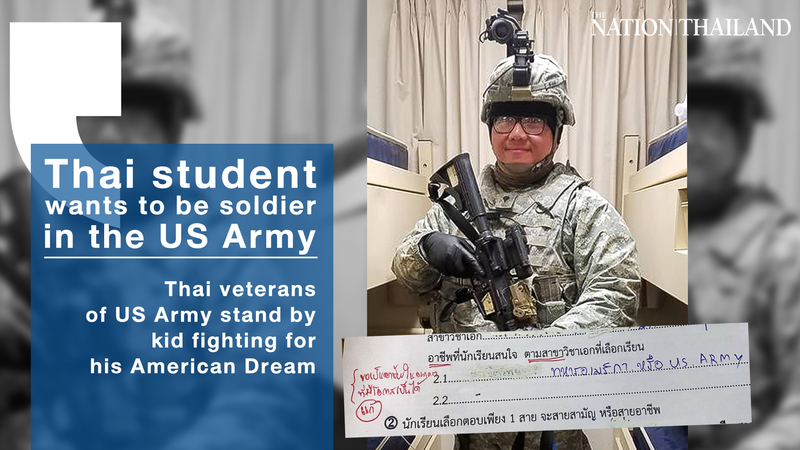 Fighting for his American Dream

Told his ambition to join the US Army was unrealistic, a Thai boy gets new hope from a Thai veteran of the American military

After his dream of joining the world’s most powerful fighting force was shot down by his teacher, a Thai student has been handed new hope of realising his big ambition.

The student’s written answer to the question of what he wanted to be when he grows up was posted recently on social media, where it spread quickly. The student had answered, “a soldier in the US Army”. Unsurprisingly, his teacher told him his dream was impossible to fulfil.

The post drew plenty of comments and advice from social media users – including Thai soldiers who have served in the US Army. Among them was a Facebook user identified as former US soldier Pattara Niyomchat.

He recounted that, as a boy raised upcountry, he started learning English in Grade 4 class.

After performing well in a language test, he visited the US on an exchange programme at the age of 17. Pattara said it took him four months before he was comfortable speaking in English.

After graduating high school, he followed his dream by returning to the US and joining the army. He, too, had dreamed of joining the US military when he was a child.

When his contract with the US expired, he returned to live in his hometown of Nakhon Si Thammarat, he added.

Pattara encouraged the young student to follow his dream, but also be prepared for hardship if he wanted to achieve it.

Currently, there are over 50 Thais in the US Army.

The criteria for joining the US military are as follows:

1. Must be US citizen or hold a Green Card.

3. Must have high school degree, whether from the US or other countries.

4. Must have no chronic/congenital disease.

5. Must pass military pre-test and test.

A soldier’s contract with the US Army lasts between 2 and 8 years.