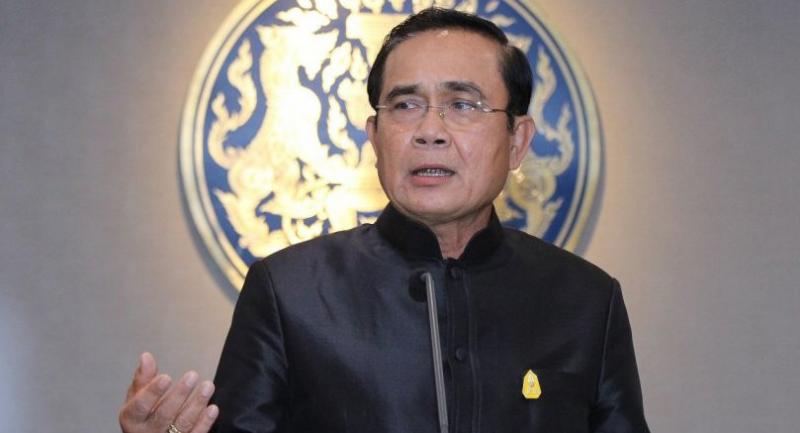 Prayut insists no delay in ‘road map’, but amendments could take several months

His Majesty King Maha Vajiralongkorn has advised the government to amend the section of the new constitution draft dealing with the exercise of royal power, Prime Minister General Prayut Chan-o-cha said yesterday.
Prayut said there were about “three to four issues” in the new charter draft while a spokesman of the National Legislative Assembly (NLA) admitted that the proposed amendment concerned the King’s prerogative in appointing a regent in the event of his absence from the country or if he is incapable of performing his duties. The amendment would mean that the King would not be constitutionally bound to appoint a regent.
The Interim Charter will also have to be amended to the same effect.
The amendment is likely to delay the next general election tentatively set for late this year, but Prayut insisted a new government should still be able to take over early next year.
The Office of His Majesty’s Principal Private Secretary had contacted the junta government saying that some of the charter draft’s content regarding the monarch’s power needed to be discussed, Prayut said.
Prayut added that following the new King’s consideration, the draft would be returned for amendments to be carried out on several points.
Before amending the charter draft, the junta needs to amend the Interim Constitution of 2014to pave the way for the amendment of the supposedly finished charter draft, which was submitted for royal endorsement last October.
This Friday, the NLA will deliberate in three consecutive readings on the amended Interim Charter empowering the King discretion on the designation of a regent and to allow amendments to the constitution approved in the August referendum in line with the King’s advice.
Jate Siratharanon, spokesman of the NLA’s whip, confirmed the draft amendment circulated by online media outlet Isra News was the same as the copy the NLA had received from the Cabinet and the National Council for Peace and Order.
According to Isra, the draft amendment featured two main issues. One was Article 3, which involved a new stipulation: “Should the King not reside in the Kingdom or should the King not be able to perform his duty for any reasons, the King shall or shall not designate a regent by his preference and such a command shall be countersigned by president of the Parliament.” The passage was to be added to the existing Article 2 of the charter.
The second issue affected Article 4 of the Interim Charter, providing a mechanism for the charter draft to be returned to the prime minister for amendments in line with the King’s advice.
The changes should be completed within a month, while the entire legislative process could take another two to three months, Prayut said.
Deputy PM Wissanu Krea-ngam said Articles 5, 17 and 182 of the new charter draft will be amended, as will other Articles referring to the above three. Under the Interim Charter, Prime Minister Prayut Chan-o-cha will be given authority to lead this task once the draft charter has been returned, Wissanu said, adding that the PM will set up a special committee to complete the task.
While it is not yet clear how the special committee and the National Legislative Assembly will coordinate when it comes to amending the draft charter, Wissanu said the changes should be done within 30 days after the draft charter is returned. The draft will then be forwarded to the King for endorsement, which should take no more than 90 days, he added.

‘Timeline same after changes done’
Although the situation might imply postponement of the charter being promulgated, Prayut insisted that the junta’s “roadmap to democracy”, including its timeline for a general election, would still be strictly followed “once the permanent charter is in place”, Prayut said.
He for the first time yesterday said there would have to be consideration about the appropriateness of political proceedings given that the Royal Cremation and Coronation are scheduled to be held this year. “Things will proceed once [those ceremonies] are over. I’m not prolonging anything. Who would expect what happened?” the prime minister said, referring to the late King’s passing.”

Article 3: Add the following to the third paragraph of the 2014 Interim Constitution’s Article 2: “Should the King not reside in the Kingdom or should the King not be able to perform his duties for any reasons, the King shall or shall not designate a regent of his choosing and such command shall be countersigned by president of the Parliament.”