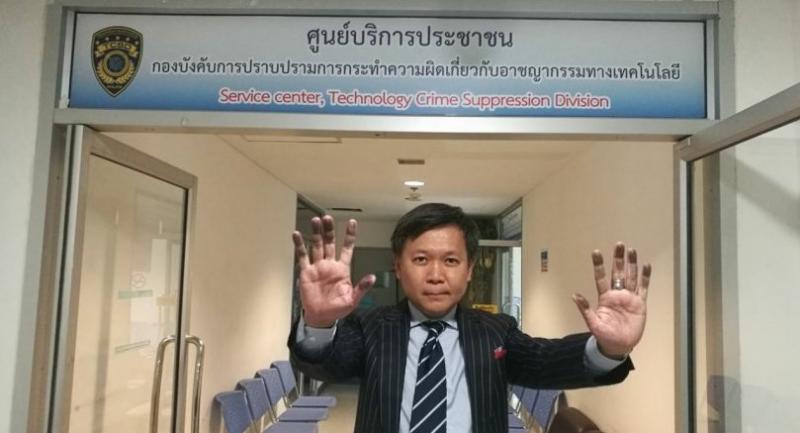 The TCSD yesterday charged him with one act of sedition while sparing him from a computer crime charge as it remained unclear whether his posts included false information, according to the Thai Lawyers for Human Rights (TLHR), a non-profit group defending Pravit and other suspects in political cases.
However, it was not disclosed how many of his Facebook posts or what content violated the law.
Pravit, 49, was accompanied by human rights lawyer Yaowalak Anupan as well as representatives from the Canadian, British, French, German and Swedish embassies and the UN Office of the High Commissioner for Human Rights, European External Action Service and the International Commission of Jurists.
Despite the charge, which could land Pravit in prison for up to 14 years, the veteran journalist appeared in good spirits yesterday.
He insisted that criticising the National Council for Peace and Order (NCPO)-backed government was within the rights of the media and citizens.
Pravit also wrote on Facebook before reporting to police yesterday that it was an honour and a privilege to serve the country by defending press freedom and freedom of speech.
“One cannot defend freedom if one is not willing to sacrifice and pay the price,” he wrote.
He also thanked supporters who remained in solidarity with him throughout what he described as “a cloudy day”.
He was freed yesterday by authorities after being detained for four hours.
Since he revealed that he had been contacted by police and charged for allegedly violating Section 116 of the Criminal Code, which refers to sedition, a number of international organisations have issued statements of support and called for the junta to drop the allegations.
Pravit, widely known for his outspokenness and journalistic work opposing undemocratic rule, was previously detained twice for so-called “attitude adjustments” by the junta in 2014 and 2015 when he worked at The Nation.
Sedition is a criminal charge commonly brought against anti-junta activists, alongside alleged violations of the Computer Crime Act and other laws. The TCSD will consult with the policeman that accused the journalist of violating the Computer Crime Act before summoning him again next Friday, the TLHR wrote.