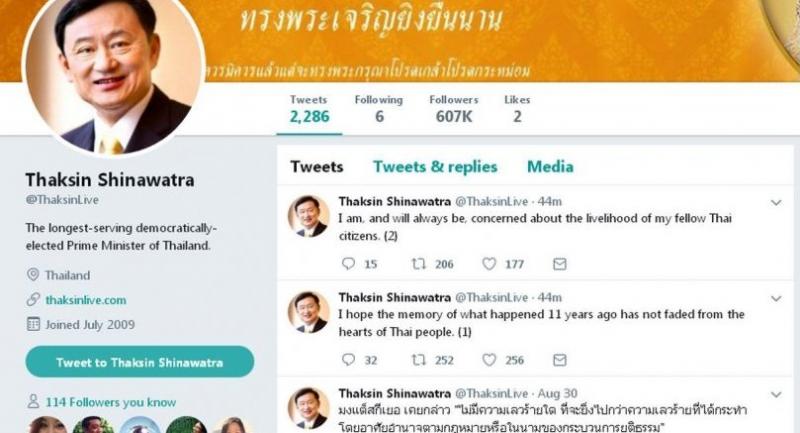 Thaksin reaches out to Thais on 2006 coup anniversary

To commemorate the 2006 coup that deposed his government, fugitive former prime minister Thaksin Shinawatra yesterday expressed concern about the “livelihood of fellow Thai citizens” via his Twitter account.

“I hope the memory of what happened 11 years ago has not faded from the hearts of Thai people,” Thaksin wrote in English via his account @thaksinlive. “I am, and will always be, concerned about the livelihood of my fellow Thai citizens.”
Thaksin’s former deputy Chaturon Chaisang joined the former premier by tweeting: “A while after the 2006 coup, I was asked how long it would take Thailand to return to democracy. I replied that it might take a long time. As of today, that is even outdated compared to how it used to be 11 years ago.”
On September 19, 2006, the military staged a coup against Thaksin’s elected caretaker government after two years of protests against the businessmanturnedpolitician’s administration over a series of corruption issues.
The coup was followed by a decade of political turmoil and shortterm governments before Prime Minister General Prayut Chanocha, then the Army chief, staged another coup in May 2014. He has ruled Thailand since.
Thaksin’s tweets were his second online appearance in a week after his daughter, Pintongta Kunakornwong, posted photos and clips of Thaksin with her husband and twin daughters in the UK.
That post coincided with the schedule of Deputy Prime Minister and Defence Minister General Prawit Wongsuwan, who was visiting the UK from last Tuesday to Friday on the invitation of the British government.
Despite speculation that Prawit had talked with Thaksin, the deputy premier denied that he had met him about his sister, former prime minister Yingluck Shinawatra, whom security forces have been tracking after she disappeared before hearing a Supreme Court verdict related to her government’s ricepledging scheme last month. “I left during the daytime and [Thaksin] came at night. How could we meet? He and I also went through different airports,” Prawit said.
Meanwhile, Prayut said authorities had not caught Yingluck because “they”, in reference to other countries, had not agreed to extradite her. “We can only wait,” he said.
Prayut said earlier Thailand had contacted Cambodia, Laos, Myanmar, Vietnam, Singapore and the United Arab Emirates in pursuit of Yingluck.
Yesterday, Prayut led a mobile Cabinet meeting in Ayutthaya as a part of a twoday field trip focusing on local development issues in the Central region.
On Monday in Suphan Buri, he met with key figures from the Chart Thai Pattana Party, the first time that he had met with local politicians despite his professed distaste for political figures.
Prapat Pothasuthon, a Chart Thai Pattana Party veteran and former minister, told Prayut that it would be fine for the junta premier to stay in power for “eight or 10 years” as long as he considered people’s wellbeing.
Prayut said later that the meeting did not involve a political deal regarding the muchdelayed election. “They only came to acknowledge what we are doing,” he said. “It was just a step towards reconciliation to settle things for the next election.”
Democrat Party leader Abhisit Vejjajiva said it was too soon to guess whether Chart Thai Pattana might join forces with the military in the election. The meeting was not unusual, Abhisit said, given that the politicians came from the province and the talks had not caused any harm.
However, he added that it was essential for the junta to follow its socalled “roadmap to democracy”. “Failing to do so would bring more damage than that caused, as they said, by democracy,” he said.