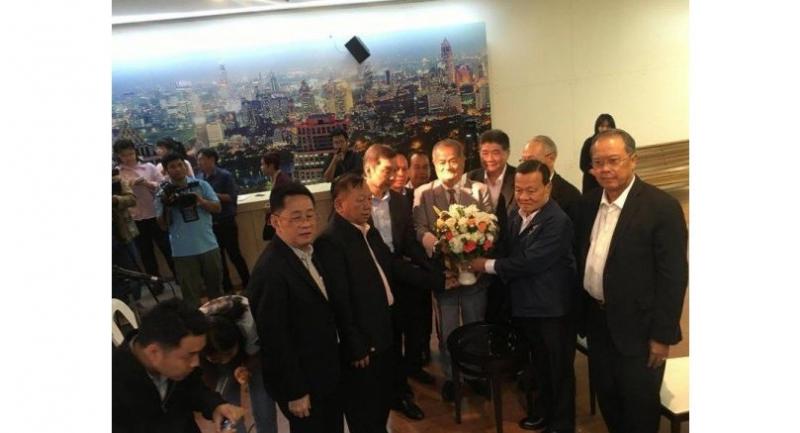 THE VISIT on Wednesday by local politicians to Pheu Thai Party’s headquarters was graced by sweet New Year blessings and certainly wishes for the upcoming election.

Some former MPs went to bless Khunying Sudarat Keyuraphan, one of the party’s active key figures and, one of the leading candidates to be chosen party leader for the next election.
On the same day, former PM Chavalit Yongchaiyudh also declared his support for the party when Pheu Thai politicians paid him a visit.
But when Prayuth Siripanit led the Northeast-based ex-MPs to pledge “life-long loyalty”, the third incarnation of the Thaksin Shinawatra-founded party was assured of the support of Isaan MPs ahead of the election.
Prayuth is a political heavyweight – a veteran politician, a former minister, and a key campaigner behind drafting the notorious blanket amnesty bill that triggered the fall of the Yingluck Shinawatra government.
The amnesty fiasco might erode his credibility but he continues to maintain control over his stronghold and hence was able to lead such a pledge of loyalty. But to what extent will these Isaan MPs stay with the most obstructed party under the junta, which still bans political gatherings and obliges parties to “update” their membership list in a way much seen as a requirement to reset?
Going with a military-leaning end of the spectrum becomes an undeniably good choice for political survival. The Sasomsap clan and the Palangchon group have the potential to detach from the Pheu Thai Party, let alone Bhumjaithai, Chart Thai Pattana and the Machima blocs.
Prayuth may hold a tight grip on the Isaan MPs group, Pheu Thai Party’s strongest area, but the emergence of internal conflicts would likely shake the party’s regional stability.
Many Pheu Thai members, particularly key red-shirt figures, want to replace Prayuth in order to hold power in such an influential region once the election process is underway.
When a party can nominate only one candidate per constituency, local ex-MPs and red shirts would have to compete at their best to gain the seats.
Each side has their own sense of belonging. The red-shirt leaders think that they have done their job in keeping up with the masses against the military coup. The ex-MPs, meanwhile, can still participate in community projects and activities although barred from formal political movements.
This is only the beginning of internal Pheu Thai conflict in its largest stronghold – even when the promised election remains murky to all.
The moves of Prayuth, Sudarat or Chavalit could hint at the party’s path.
Lifelong loyalty, though sweet, is merely another political discourse and marks the beginning of political uncertainty ahead of the election.