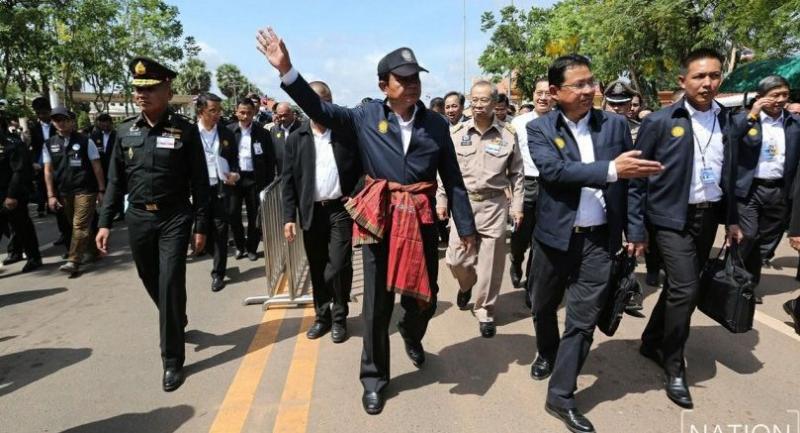 The sons of a convicted murderer, a rural "don" who has spun a fortune from football and gun-loving provincial bigwigs -- as elections near, Thai junta leader Prayut Chan-o-cha is cosying up to "influential figures", a group he vowed to expunge from politics with his coup four years ago.

Throughout his rule Prayut, the gruff ex-general whose army seized power in May 2014, has maintained one key refrain: politicians and their cronies are the cause of the country's political instability.

But the 64-year-old is suddenly changing tune as he looks to complete a stunning metamorphosis from dictator to elected leader at polls promised for 2019.

The retired general has been coy on formally announcing a run for office.

Yet in recent months he has been busily courting the political fiefs that dominate the country, specifically potential allies of his nemesis, the billionaire former premier Thaksin Shinawatra.

On Monday Prayut rolls into Buriram, a northeastern province dominated by Newin Chidchob -- an ex-politician turned sports mogul whose shape-shifting alliances have made him a key political "kingmaker".

A full house of 36,000 is expected at Buriram FC's "Thunder Castle" stadium to greet Prayut -- an unprecedented reception for the leader, whose popularity is on the slide among the Bangkok middle class.

The public adulation will be interpreted as sign of a deal with Newin, who steers his Bhumjaithai Party from behind the scenes.

"Prayut has become the ultimate hypocrite," said Paul Chambers, a Thailand-based expert on the kingdom's politics.

After endless politician-bashing, "now Prayut and the (junta) are using many of these same corrupt politicians to build a political party."

Prayut denies he his on the campaign trail, with political activity banned by his regime.

But there are few doubts he is out to complete his mission of scuttling the Shinawatras' election machine.

The clan have won all general elections since 2001, relying on their popular appeal in the rural north and northeast.

She has joined her brother in self-exile after being convicted of criminal negligence.

Their Pheu Thai party is weakened without the siblings' star power and Prayut is seeking to overrun them at elections with the support of provincial bosses -- and the mid-sized parties and vote banks they carry.

What Newin might get for backing Prayut remains unknown. But his counterparts in eastern Chonburi province already appear to have been rewarded.

Two brothers from the Kunplome clan, who dominate Thailand's eastern seaboard, were made cabinet-level advisors in April.

Their family is headed by elderly Somchai, dubbed the "Godfather of Chonburi", who was released early from jail in December after serving a fraction of a 28-year sentence for masterminding the murder of a local politician.

Prayut has repeatedly denied any horsetrading is going on.

But his meetings continue to raise eyebrows, including a golf outing with another influential clique -- the Pheu Thai-linked Sasomsap brothers in Nakhon Pathom.

A few years ago they were targeted by a junta crackdown on "influential figures".

Police raids found scores of guns in raids at their homes, according to local media.

"Prayut understands how politics functions. If you want to win an election as a newcomer you have to collaborate with existing powers in provinces."

Abhisit Vejjajiva, the leader of the establishment Democrat party, said Prayut's regime has also approached a number of his MPs.

"They talk about positions in government," he told AFP.

Although such horse-trading is nothing new, politicians are chafing at the head start taken by a regime that continues to bar all other parties from holding meetings.

Chaturon Chaisang, a veteran Pheu Thai politician, added that some politicians may be coerced into supporting the junta in a political culture defined by personality and power rather than ideology.

"It's an old-fashioned operation," he told AFP.