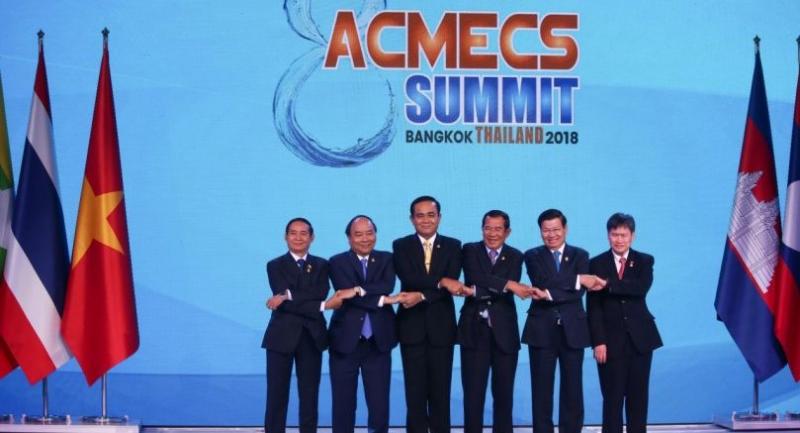 Development funding gets the backing of leaders

LEADERS of five Southeast Asian nations yesterday collectively pushed forward the setting up of sub-regional development funds in the hope they would increase self-sufficiency by driving construction of “missing-link” projects.

The new co-managed funds were proposed at the summit of the Ayeyawady-Chao Phraya-Mekong Economic Cooperation Strategy (ACMECS ) attended by government leaders from Thailand, Cambodia, Laos, Myanmar and Vietnam.
However, an ACMECS Fund and an ACMECS Infrastructure Fund and Trust proposed by Thailand are still a long way from launching. The funds are named after the five-country grouping.
Senior financial officers will have to work out a wide array of details, from who will supply seed funding to who will administer the funds. A first meeting of the officials is tentatively expected after October, at which they will discuss terms of reference and detailed operations.
“It’s now a symbolic direction where we set forth to our friends where they need funding, and they will see the need,” said Nikorndej Balankura, deputy director-general of the Foreign Affairs Ministry’s International Economic Affairs Department.
“We want the five countries to go in one direction,” he added.
While they would seek financial institutions to manage the funds, the ACMEC countries would at the very least have co-ownership, Nikorndej said.
“The timing is right. The development of each [of the five] countries is now in a state where we can come up with funds. We will become partially self-funded,” he said.
Included in the Bangkok Declaration adopted at yesterday’s 8th ACMECS Summit in the Thai capital, the idea emerged from the steady – but slow – recent growth of the five countries.
While development projects in the three-river countries have relied mostly on third-party money, mainly from China but also Japan, South Korea and Australia as well as multilateral banks, the ACMECS countries have insufficient money to pursue the large number of projects being planned.
The Bangkok Declaration notably contains the need for a five-year ACMECS Master Plan. In effect beginning next year, it would spell out the three-river region’s requirements for the hardware and software infrastructure needed to achieve their goals of “seamless connectivity” and “synchronised ACMECS”.
Thailand’s prioritised projects to be implemented in the next two years include construction of six roads connecting an East-West Economic Corridor, four roads connecting a Southern Economic Corridor, seven railway routes, one port in Ranong, and two airport development projects in Mae Sot and Khon Kaen.
The infrastructure would cost up to US$5 trillion (Bt160 trillion), PM General Prayut Chan-o-cha said after yesterday’s summit.
“We agreed to raise funds or else all these plans will be in vain,” said the Thai premier, who also encouraged ACMECS countries, development partners and “interested countries in Asia and Europe and other stakeholders” to support establishment of the fund.
“We have to look at the funding. Thailand would start with some amount of money. The Asean secretary-general and partner countries will also play significant roles,” Prayut said.
But how much Thailand would invest in the fund is “not as important as building co-ownership of the fund”, Nikorndej said. While Friday’s ACMECS CEO Forum emphasised public-private partnerships, Nikorndej said that plans for the ACMECS funds do not yet include private investment.
“We will see later on about how we will engage with the private sector. However, Thailand is in discussions with the private sector and the Neighbouring Countries Economic Development Cooperation Agency to see where and when private roles should be included,” Nikorndej told reporters.