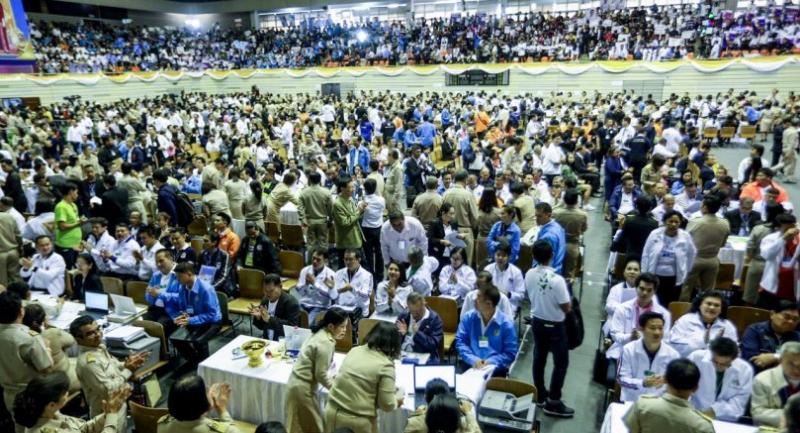 Reports from all 350 constituencies show democrat and Phalang pracharat parties have highest number of candidates.

IN THE first day of registration yesterday, 58 political parties submitted 5,831 candidates to contest for seats in all 350 constituencies, the Election Commission (EC)’s secretary-general Jarungwit Phumma said.
Two parties also submitted their party-list candidates, he added.
According to the latest figures, Democrat Party has registered the largest number of candidates at 341, followed by Phalang Pracharat |with 335.
Seri Ruam Thai Party with 333, Future Forward Party with 330 and Bhumjaithai 325 candidates.
Jarungwit has called on political parties to not wait until the last day to submit their list of candidates, as every applicant will have to be checked and verified.

Meanwhile, the EC and the non-governmental election observers said they were pleased with how smoothly the registration of candidates had proceeded.
Jarungwit reiterated that everything went smoothly with the exception of minor problems, such as a power outage in Nong Bua Lumpu registration venue.

‘Celebration allowed’
The election commissioner also said that the EC was not prohibiting election candidates from holding processions to celebrate their registration, however, he warned them not to violate the law banning campaigners from holding entertainment activities to woo voters.
Jarungwit said the EC will announce the list of qualified election candidates a week after the candidacy registration wraps up on Friday.
Bangkok became a highlight yesterday as 446 candidates applied to run in 30 constituencies.
Bangkok Metropolitan Administration’s city clerk Sialpasuay Raweesaengsoon said the registration at Thai-Japanese Stadium in Din Daeng went smoothly as most candidates showed up before 8.30am. She added that the drawing for candidacy numbers also went smoothly.

Witchuda Mekhanuwong, director of the Bangkok election office, said 448 candidates had shown up but |two were disqualified, adding that constituencies 1, 10 and 17 had the highest number of candidates at 17 each.
Sak Korsaengruang, chairman of the Open Forum for Democracy Foundation (P-NET), which is observing the lead-up to the national elections, said it was pleased with the candidacy registrations and had found no irregularities.
He said the foundation hoped no candidates will violate the election law as that can affect election results and prevent the EC from announcing up to 95 per cent of the poll results within the deadline.
Sak also called on the EC to launch awareness campaigns, especially for first-time voters, to ensure a high voter turnout and that good politicians are elected.