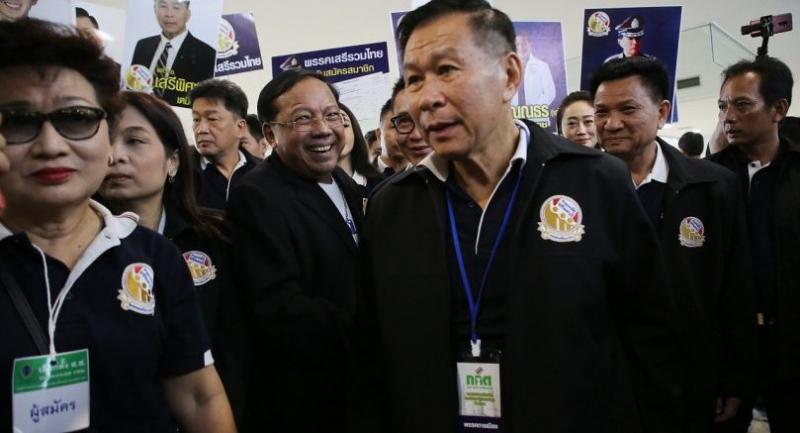 A political party leader on Monday asked the Election Commission (EC) to dissolve the Palang Pracharat Party, which he claimed had nominated candidate that acts against the democratic system” as its prime ministerial candidate.

Retired national police chief Sereepisut Temeyaves, who heads the Seree Ruam Thai Party, said that Palang Pracharat’s candidate, Prime Minister Prayut Chan-o-cha, was a coup leader who had become premier.
General Prayut had also ordered the cancellation of the 2007 Constitution and then the rewriting of the new one, he said.
“These [acts] clearly showed that Palang Pracharat’s candidate is against the democratic system, and the party has [therefore] violated the election laws,” Sereepisut said.
He was speaking after submitting a petition to the EC, seeking disbandment of the party.
Sereepisut claimed that the nomination of Prayut was clearly more against the election law than the case of the embattled Thai Raksa Chart Party, which is facing dissolution after nominating Princess Ubolratana as its premier candidate on February 8.
The EC recommended on February 11 that the Constitutional Court rule to dissolve Thai Raksa Chart, and the court allowed the party seven days to submit its defence.
Sereepisut’s petition is the second that the electoral agency has received concerning Palang Pracharat, the first having been submitted last week by Ruangkrai Leekitwattana, a party-list MP candidate for Thai Raksa Chart.
Ruangkrai on Monday repeated his call for the EC to ask the court to dissolve Palang Pracharat Chart, arguing that the agency should not practise double standards.
Besides the party nominating Prayut, a coup leader, as its prime minister candidate, Uttama Sawanayon registered the formation of Palang Pracharat before he had applied for membership of the party, Ruangkrai added.
Another issue concerned Palang Pracharat’s hosting of a Chinese banquet last year, which he said had clearly violated a 2017 organic law concerning activities by political parties.
Ruangkrai insisted he was not worried about his own party, because he believed it would not be disbanded.