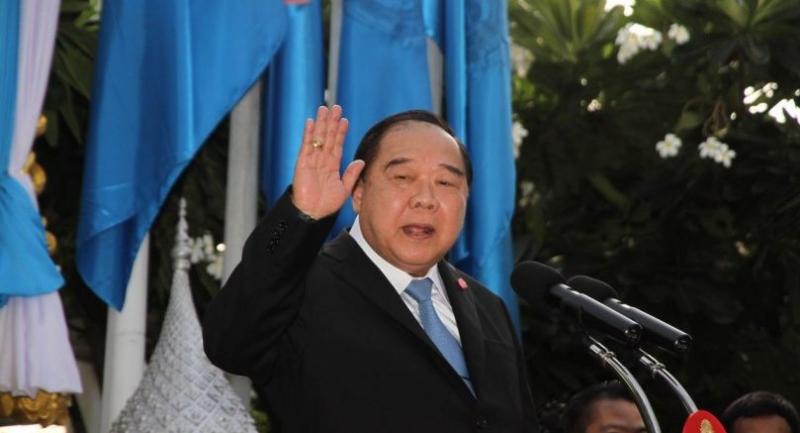 Junta gets list of Senate candidates to choose from

FOUR HUNDRED Senate candidates have been shortlisted – with an Army source saying a significant number of them are military officers.

Their names were submitted yesterday to the National Council for Peace and Order (NCPO).

The selection committee led by the junta’s No 2, Deputy Prime Minister General Prawit Wongsuwan, met yesterday for the last time. Of the 400 people nominated, the junta will appoint 194 as members of the Upper House.
To fill out the 250-member Senate, 50 other candidates will emerge from the normal selection process with the assistance of the Election Commission (EC) and another six will be military or police commanders.
The selection of senators is proceeding in line with the Constitution, which authorises the NCPO to continue filling the bulk of the Senate for the next five years. It requires candidates’ names to be submitted for junta consideration at least 15 days before a parliamentary election.
A source on the selection committee said candidates were shortlisted based on their credentials and their knowledge of politics. The Senate’s job is to help guide the country through the post-election transition period and help choose the next prime minister, the source said.
“Selecting the candidates wasn’t easy,” the source said. “We had to look for those who understand politics and can work alongside the elected members of the House of Representatives. So each candidate’s personality and social status are important. They have to be ‘accepted’ and they must work to overcome the perception that appointed senators are not good.”
Though opposition has been strong to the idea of a junta-appointed Senate, the source insisted that the Upper House under the current Constitution is obliged to support the elected Lower House. The Senate is not meant to be an “outside factor” intervening in the work of an elected |government, the source |said.
The appointed senators should be “understanding” and be able to communicate well with those who appointed them, the source added.
The committee did not reveal the names submitted to the NCPO, but it is believed that many candidates are familiar faces closely tied to the ruling junta.
Prawit’s brothers – Patcharawat and Sitwatchara – were mentioned, as were his close aides Boonruang Pholpanit, Wich Thephasadin na Ayutthaya, Wallop Raksanoh and Taweep Netniyom.
Meanwhile the pro-Shinawatra Thai Raksa Chart Party, which was dissolved on Thursday, began removing its election banners and online posts.
EC secretary-general Jarungvith Phumma said on Friday its members could no longer campaign under the party’s name, though party executives banned from politics for 10 years could help other parties in the pro-Shinawatra camp with their campaigns.
He warned them, however, to be careful and not be perceived as influencing the party they are helping, which could be unconstitutional.
Non-executive members of the party have the right to jump to other parties, Jarungvith said.
The EC had begun disseminating information about the Thai Raksa Chart dissolution, with expatriate Thais already voting overseas, he said. Votes cast for the disbanded party will be declared void.