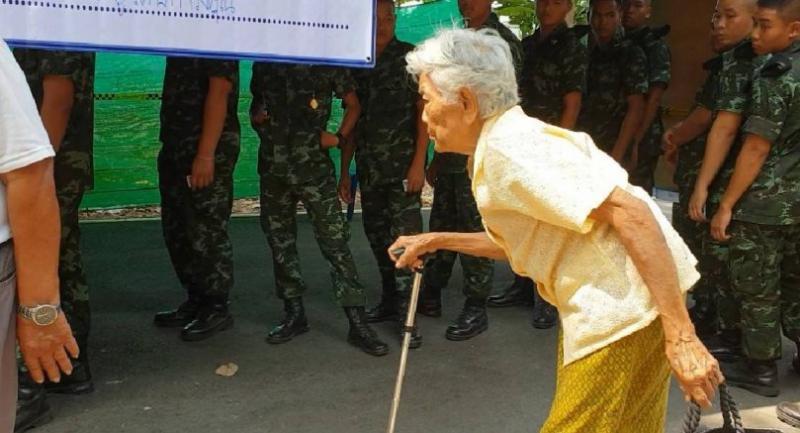 Senior citizens go for the ‘tried and trusted’

ELDERLY VOTERS were yesterday showing their usual tendency to “play it safe” and vote for the same parties they’ve always supported rather than taking a “gamble” on newcomers.

Most seniors asked about their voting habits said they chose a party based on its prior performance and thus preferred established parties and MP candidates with which they were familiar.
Kornthip Eksamut, 72, casting her ballot in Bangkok’s Phasi Charoen district, said she and other members of her family were sticking with the Democrat Party, their choice in previous elections.
“Some members of my family are switching this time to the Phalang Pracharat Party, but most of us are still voting Democrat because we’re confident they’ll do honest work in Parliament,” Kornthip said.

She said she was “quite happy” with General Prayut Chan-o-cha’s performance “and would like to see him stay on as prime minister for another term”.
“But some of his current Cabinet members aren’t very honest, in my view, so I’m sticking with my beloved Democrat Party in the hope they’ll work with General Prayut and take the country in the right direction.”
Kornthip had heard younger people speak highly of Thanathorn Juangroongruangkit and his Future Forward Party. She believed they must have good qualities to draw so much approval among youth, but she didn’t know Thanathorn well enough to vote for him.
A similar principle applied at the opposite end of the political spectrum for Prajeub Yimklib, a senior in Nonthaburi’s Bang Kruai district. She was once again voting for the Pheu Thai Party because she remains confident in its abilities and intentions.
“I admit that Thanathorn and Future Forward are appealing, but I still prefer Pheu Thai because I benefited from many of their good policies while they were in office,” Prajeub said.
“I hope Pheu Thai wins the election and forms the new government so they can come out with more good policies that truly benefit the people.”
While first-time voters are getting much of the media and candidate attention for their ability to swing the election outcome, the long queues of older voters at many polling stations in Bangkok’s suburbs attested to their keenness to participate and play their own crucial role.
In fact there were more seniors eligible to vote in this contest than young people – 10 million 61 years or older, representing 19.5 per cent of the total voting public, compared to 7.33 million voters age 18 to 25, or 14.3 per cent of the total.