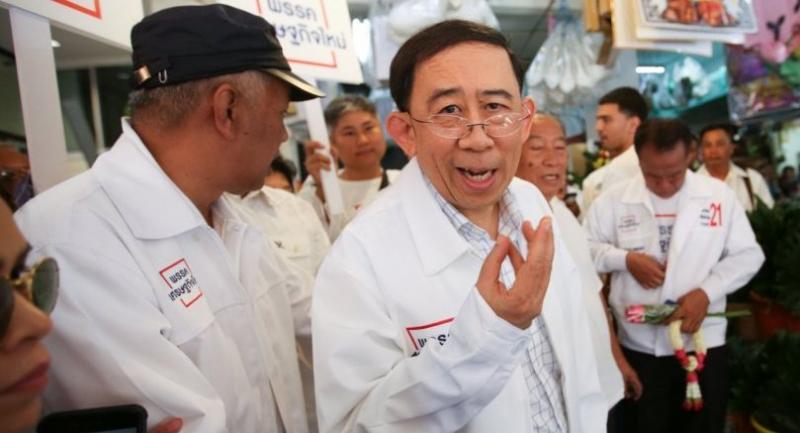 New Economics Party leader Mingkwan Sangsuwan has denied reports that his party will join the Phalang Pracharat bloc to form a coalition government.

Mingkwan, however, did not reveal which of the two camps -- the so-called pro-democracy group led by Pheu Thai or the pro-junta Phalang Pracharat -- his party would prefer to support as a coalition partner.
Mingkwan’s clarification on Saturday came after local media reported that Phalang Pracharat had successfully gathered the support of more than 250 MPs to form the next government with Mingkwan agreeing to support their group.
“The report is not true. I have neither talked on politics with Phalang Pracharat nor bargained for any political posts,” Mingkwan said in the statement posted on his Facebook page.
After the news spread yesterday, social media users slammed Mingkwan for going back on his word of not working with Phalang Pracharat as they had a different ideology.
Two Thai-language hashtags--#Mingkwan and #MingkwanBusted became top trends on Twitter for a while yesterday along with criticism of the New Economics Party leader.
Tipped to win five to six MP seats, Mingkwan’s party can make or break the Pheu Thai-led bloc’s bid to form the next government, as without his backing they will not have the 250-seat majority required to tip the balance.
Responding to Mingkwan’s latest statement, Pheu Thai key figures yesterday expressed confidence that he would not betray them.
“I’m confident that Mingkwan is a good politician who keeps his word,” Khunying Sudarat Keyuraphan, Pheu Thai’s PM candidate, said on her Facebook page.
Pheu Thai secretary-general Phumtham Wechayachai said he had never believed the report of Mingkwan backing Phalang Pracharat, whose party had told the people that they would not support the military to continue in power.
Pheu Thai and five allied parties held a press conference a few days after the election to declare that they would be standing together to fight the junta’s moves to retain power, claiming they already had the support of at least 255 MPs to form a coalition.
The bloc, based on unofficial poll results, includes Pheu Thai (137 seats), Future Forward (88), Puea Chart (5), Prachachat (7), Seri Ruam Thai (12), Phalang Puang Chon Thai (1), with New Economics Party as the seventh member with five or six seats.
However, neither Mingkwan nor his party colleagues showed up at the conference, and their absence obviously raised doubts about which side New Economics Party was planning to be on.