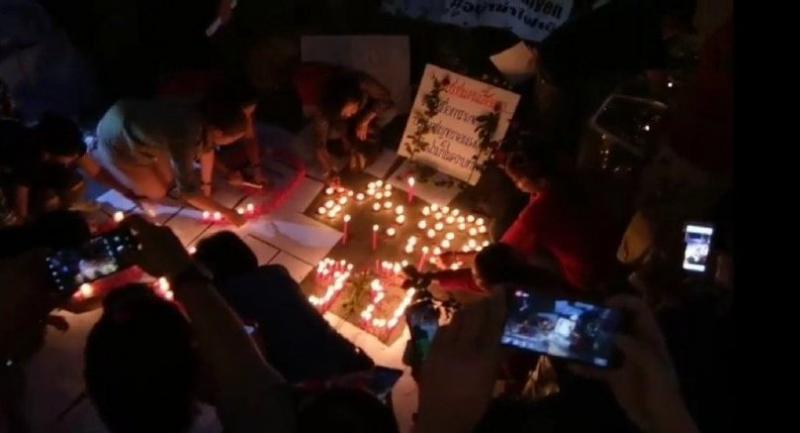 EVENTS WERE held yesterday to mark the ninth anniversary of the killings of six people at Pathum Wanaram Temple in Bangkok during a crackdown on anti-government protesters by security forces in 2010.

Phayao Akkahad, the mother of Kamonkade – a volunteer nurse who was among the six killed at the temple – held a religious ceremony at Pak Bueng Temple in Lat Krabang district to make merit for her deceased daughter.
Other events marking the tragic incident were planned for later yesterday.
Another event was planned at 7pm at the nearby Ratchaprasong intersection, with candle-lighting and singing in memory of the deceased protesters.
Phayao called on the government and relevant authorities to ensure justice for the protesters as well as soldiers killed during the tumultuous street protests in 2010.
On May 19, 2010, many red-shirt protesters gathered inside Wat Pathum Wanaram while an operation by security forces was under way at a nearby protest site to disperse the street protests that had continued for over two months.
The six were shot dead from a distance and the perpetrators were believed to have fired from the Skytrain tracks just outside the temple. Authorities at that time blamed armed men in black mingling among the protesters.
But many among the red shirts believe it was the work of security forces.
Phayao said yesterday that she believed government officials were responsible for the shootings of her daughter and the others killed at Wat Pathum Wanaram.
She also said that over the past five years in power, the ruling National Council for Peace and Order (NCPO) – many of whose members were top military commanders overseeing the crackdown on protesters in May 2010 – had failed to push for a speedy investigation into the deaths of protesters.
Instead, she noted, the protesters were branded “terrorists” and blamed for the arson attacks on many buildings in Bangkok at that time.
“It’s nine years of silence. We have not yet seen justice. I will not allow silence to continue,” she said.
Phayao also said the red-shirt protesters were vilified as terrorists and arsonists, adding that it was proved in court that “no burning had happened”.
She noted that five military officers were killed in the 2010 incident but that the NCPO had failed to push for an investigation to find out who had killed them.
“The truth must be found for the sake of the families of the soldiers who had lost their lives,” she added.
“If the democratic camp is able to form a new government, I expect to see progress in the cases involving the red shirts,” Phayao said.