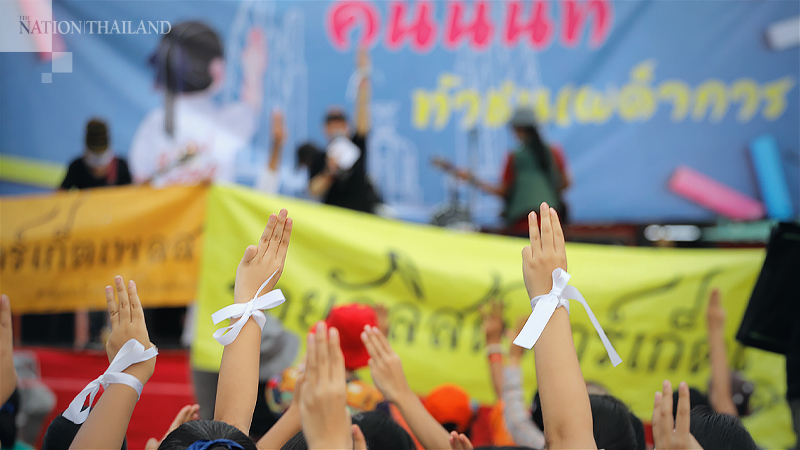 A parliamentary committee has responded to demands for reform from the youth-led anti-establishment movement by organizing a dialogue forum to discuss their calls, including monarchy reform, on September 22.

The dialogue is aimed to provide an intimidation-free “safe zone” for the students to share their opinions on reform, said Padipat Suntiphada, chairman of the House Committee on Political Development, Mass Communications and Public Participation.

The move came after the panel last month invited students to hear their thoughts on charter amendment and other demands voiced by youth-led protesters since July.

Among the proposals submitted to the committee was the so-called “10-point manifesto” for reform of the monarchy.  It seeks to, among other things, scrap the lese-majeste law, defund the royal family and bar the palace from expressing political opinions.

It marks the first time ever that monarchy reform is raised in Parliament and comes after protest leaders broke a decades-long taboo by challenging the palace’s status in public during protests in Bangkok early last month.

Proposals to curb royal power are expected to be raised again at a major student rally planned for September 19.  The students insist on having the rally on the Tha Prachan campus of Thammasat University despite objection from its administration.  The students’ plan is to camp overnight there before marching to Government House the next day.

For the first discussion on monarchy in the safety zone, Padipat said the forum will be a two-way dialogue between proponents and opponents of royal reform and other issues.

The dialogue framework was designed by the Institute of Human Rights and Peace Studies at Mahidol University.

“Most of their demands may be of concern to one group of people, but if we have to live on the same soil, they [the demands] should be discussed in a safety zone with freedom, academic principles and good intentions,” said Padipat, a Kao Klai (Move Forward) MP from Phitsanulok.

The anti-establishment movement’s core demands – a new Constitution, dissolution of Parliament and an end to intimidation of government critics – have echoed around the country. Some activists have gone further by calling for reform of the monarchy, a taboo topic in Thailand given a lese-majeste law that punishes royal insults with up to 15years in jail.

Government agencies have held youth forums, but their agenda has been limited to themes such as curriculum improvement, environmental issues and job opportunities for students. The core demands made by protesters are not being discussed.

Prime Minister Prayut Chan-o-cha has warned protesters to steer clear of criticising the monarchy and said they crossed the line when the 10-point reform plan was read out at a rally on August 10.

Since then, authorities have charged more than a dozen activists with offences ranging from sedition to incitement, but released them on bail as the government struggles with how to respond to the rallies.

Padipat hoped this panel’s forum would lead to another level of discussion in Parliament and has plans to hold more forums in other regions.

“If the forum receives good feedback, Parliament has to respond. If society lifts the ceiling [of discussion], how can MPs be afraid to talk?” he added.

“Personally, I think the safe zone [to debate the 10-point manifesto] is in Parliament. But I’m not sure when is the right time or whether we have to wait for the launch of a constitution drafting assembly [to discuss the monarchy while writing a new draft charter],” he added.

Parliament is scheduled to discuss charter amendment motions to pave the way for a Constitution rewrite on September 23-24. However, none of the motions submitted by government parties and the opposition touches on Chapters 1 and 2 which deal with the monarchy.

Only the opposition Kao Klai Party, a reincarnation of the now-defunct Future Forward, has vowed to raise the topic of royal reforms on the floor.

Kao Klai secretary-general Chaithawat Tulathon said that whether they agree or disagree with the demands of students, people should listen and understand the topic of monarchy reform.

“We are concerned that blocking discussion of the chapters could lead to a deep clash of opinion between proponents and opponents,” said Chaithawat.

Piyabutr Saengkanokkul, co-founder of the Progressive Movement, another reincarnation of the disbanded Future Forward, said now that monarchy reform has been raised on protest stages outside Parliament, it was the duty of MPs as representatives of the people to address the issue in Parliament.

“[Talking about the monarchy] won’t lead to changes in the current regime, because it is still a constitutional monarchy,” said Piyabutr.