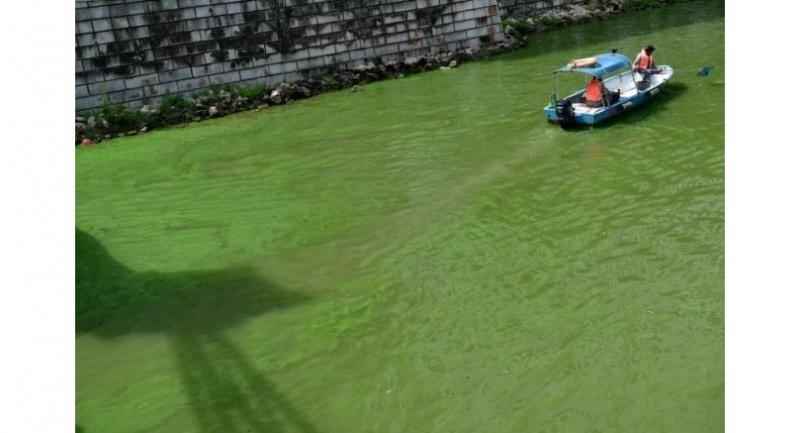 Patches of the Singapore River turned a startling shade of green Monday morning because of an algal overgrowth.

People working in the area said they noticed a greenish tint on the water’s surface two days earlier. Some detected a pungent smell too.

“I was quite shocked. I was wondering if it was because the water was polluted,” said Tina Teng, 29, a service staff member at a seafood restaurant along Boat Quay.

Others were less alarmed as they had seen it happen before.

Asha Azizan, 45, a ticket sales agent said “I usually notice it after heavy rain. I don’t think much of it because I figured it is probably a natural thing.”

National water agency PUB confirmed that the greener-than-usual waters were caused by algae – microscopic organisms naturally present in reservoirs and waterways. It added that algae in waters here are removed effectively during the water treatment process for drinking water.

By 3pm Monday, the river looked normal after routine clean-up operations by the PUB.

“Rain will wash off nutrients from land into the water bodies, and the sun allows photosynthesis, which helps green algae multiply faster,” said Chan Wei Loong, programme chair of the diploma in marine science and aquaculture at Republic Polytechnic.

An algal bloom usually lasts up to a week and disappears after that because the nutrients within the water body would have been used up.

Associate Professor Federico Lauro of the Asian School of the Environment at Nanyang Technological University said “I don’t think people should be alarmed unnecessarily.

“We should however put things in place to prevent their recurrence because they can be harmful to aquaculture.”

Most algae are not toxic, but an algal bloom can kill fishes by starving them of oxygen and clogging up their gills. In 2015, fish farmers were hit by a bloom that wiped out more than 500 tonnes of fish stocks, causing them to lose millions of dollars.

Algal blooms have also turned other water bodies here green, including the waters of Marina Bay outside the Fullerton Bay Hotel in 2015 and Kranji Reservoir last year.

Lauro said “It will happen and will keep on happening until we correct the underlying causes behind the introduction of nutrients into the water.”