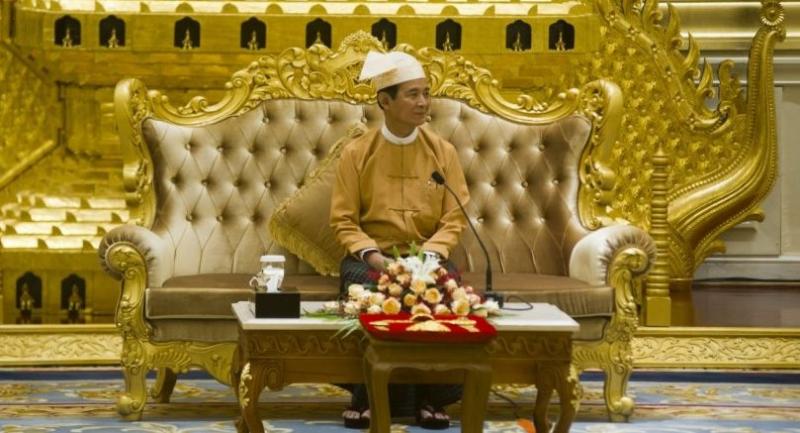 Win Myint, a 66-year-old former political prisoner and staunch ally of Suu Kyi, was elected president on Wednesday after his predecessor suddenly resigned.

Suu Kyi, the Nobel laureate who championed Myanmar's emergence from junta rule by sweeping 2015 elections, is constitutionally barred from the presidency because she was married to a foreigner.

To circumvent that snag, her party created a new position for her called state counsellor -- allowing Suu Kyi to rule "above" the president.

That makes it vital for her to have a reliable proxy in office, especially as she manages the delicate power-sharing arrangement with the military, which ruled the country for almost half a century and remains enormously influential.

In his first address to parliament, the famously straight-talking Win Myint said he would focus on the rule of law, national reconciliation and "amending the constitution to build a democratic federal union".

But talk of amendments to Myanmar's 2008 constitution is likely to rise heckles among Myanmar's still-powerful generals.

The army has ceded some power to the civilian administration, but retains 25 percent of parliamentary seats and total control of security affairs under the charter.

Win Myint also said he would work to "protect human rights", a thorny subject in a country accused of ethnic cleansing by the UN against its Rohingya Muslim population.

A violent military crackdown has forced some 700,000 Rohingya -- a long-persecuted stateless minority -- over the border into Bangladesh since August.

The army insists the campaign was a legitimate response to Rohingya militant attacks against border-guard police posts.

Win Myint is part of Suu Kyi's inner circle -- the pair campaigned together during the 1988 democracy protests against the then-junta, a movement that was violently suppressed.

For his role Win Myint, alongside many others, was taken political prisoner.

Suu Kyi is still widely regarded as a pro-democracy heroine in Myanmar even though her reputation lies in tatters globally for failing to speak up on behalf of the country's Rohingya Muslims.//AFP