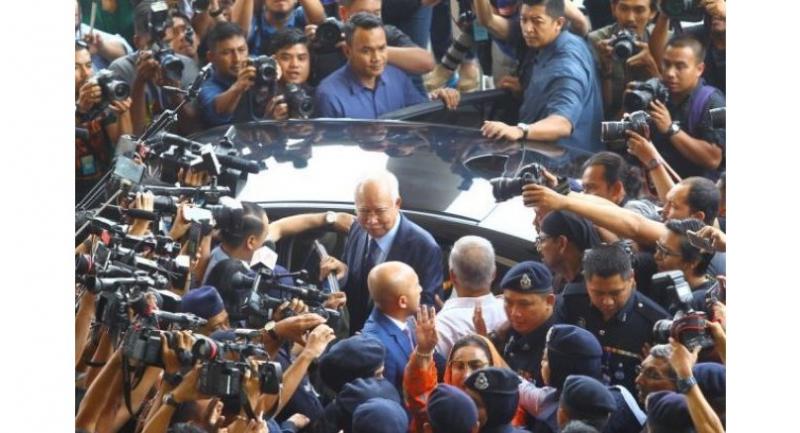 PETALING JAYA: An online petition calling for Datuk Seri Najib Razak's corruption trial which starts on Wednesday (April 3) to be aired live on television has amassed about 46,000 signatures.

The petition on www.change.org, started by an individual named Karim Yasin nine months ago, has obtained 46,244 signatures as at 5.15pm on Monday (April 1).

It specified six reasons why Najib's trial for seven corruption charges linked to the RM42mil funds belonging to SRC International Sdn Bhd – a former subsidiary of the troubled 1Malaysia Development Bhd (1MDB) – should be aired live.

Among others, it stated that this case was of public interest and it would help ensure all proceedings in court would remain transparent.

The petition said airing the trial live would also help avoid "fake news and information twisting by his supporters" and could "proceed without disturbance and interruption by supporters and media".

On Sunday, Deputy Prime Minister Datuk Seri Dr Wan Azizah Wan Ismail said that it was up to the courts to decide whether to broadcast the trial.

"We understand the people want to know the process of the trial, but we don't want to make it a circus... let the law take its course" said Dr Wan Azizah.

Najib said that he was in favour of a live broadcast.

"I will support the 'live' broadcast because it will help transparency and ensure the rule of law is followed.

"The rakyat have the right to know the truth," Najib wrote on his Facebook page on Sunday.

Datuk Param Cumaraswamy, the former United Nations Special Rapporteur on the Independence of Judges and Lawyers from 1994 to 2003 said that a live telecast of Najib's trial would negate the principles of equality before the law.

"Neither his personality as a former prime minister nor the magnitude of amount involved should be criteria for making an exception to these fundamentals. Public interest in the calls for a live telecast should not be an exception," he said.

He added that if the trial was broadcast, those involved – the accused, trial judge, lawyers and prosecutors – would seen to be performing as actors.

"The proceedings will turn into a farce and a media circus. I can foresee the clicking of cameras in Court, grandstanding lawyers and pressured witnesses, who give evidence knowing that the whole country is watching. All recipes for disaster," Syahredzan wrote on his Facebook page on Monday.

However, he said he could accept it if video recordings of court proceedings were made public after trial each day.

"But the point is this – Court proceedings are open to public. The media will have access.

"The media will report it. Nothing that goes on inside will escape the media," he said.

Syahredzan said some of the court reporters covering the trial were very experienced and would be able to accurately report on the proceedings.