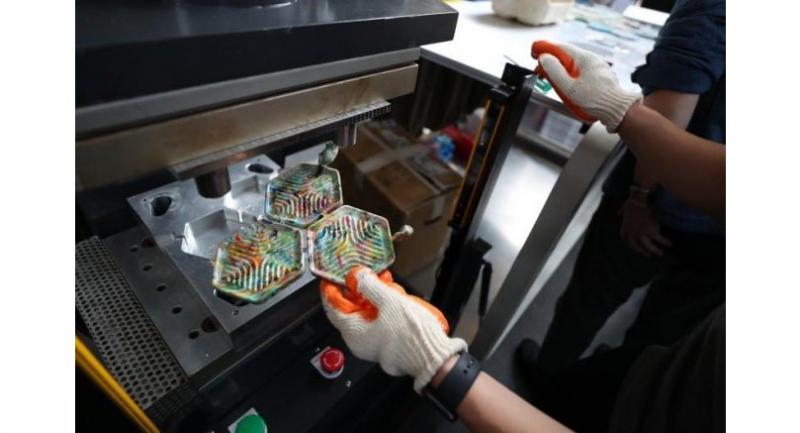 The first innovation of its kind to be showcased in Singapore, the Trashpresso can transform 135 grams of pellets into a set of three colourful hexagon-shaped coasters.

Making recycling "fun and sexy" is what Taiwanese entrepreneur Arthur Huang hopes to achieve through his mini Trashpresso - a mobile recycling plant that converts plastic waste into consumer products such as coasters and candlemakers.

The Trashpresso consists of a 12m container housing a solid waste processing line.

It is the first innovation of its kind to be showcased in Singapore and was displayed at a Recycle Right event in Toa Payoh on Saturday (June 15). The Trashpresso compacts the recycling process into three steps - reducing the size of the plastic waste, purification and reshaping.

Likened in appearance to a "candy-making machine" by Senior Minister of State for the Environment and Water Resources Amy Khor, it can transform 135 grams of pellets or recycled flakes into a set of three colourful hexagon-shaped coasters in less than 10 minutes.

"If you recycle right, you can turn trash into treasure," she said. For instance, when used bottle caps are shredded into plastic flakes and placed into the Trashpresso, they are transformed into coasters after the three-step process.

"This will help extend the life of these materials. ... This is what we call a circular economy approach. Giving our waste plastic a second lease of life," she said.

Recycling right has taken on new urgency as the amount of waste disposed of in Singapore has, in the past 40 years, jumped seven times to 7.7 million tonnes last year - enough to fill 15,000 Olympic-sized swimming pools - and the contamination rate of the blue recycling bins is at a high 40 per cent, Dr Khor said.

Even though the country incinerates its waste, if Singaporeans continue to waste resources at the current rate, the country's only landfill at Semakau will run out of space by 2035.

To help Singapore in its efforts towards becoming a zero waste nation, the answer may lie in decentralising the recycling process, said Mr Huang, founder and chief executive of Miniwiz, which develops recycled plastic materials for use in building construction, interior design and consumer products.

Founded in 2004, the company moved its headquarters to Singapore last November. It has an R&D centre in Taiwan, a manufacturing plant in Shenzhen, as well as an office each in Beijing and Milan.

"Four years ago, we wanted to create a machine that rewards people for recycling," said Mr Huang, who developed it with his team.

"The idea is to get it closer and closer to consumers. We are now in talks with many shopping malls and hotel chains in Singapore, which produce a lot of trash for recycling.

"We are planning to launch the mini Trashpresso and the smart trash collecting Robin system in Shanghai in October. But there will be a mini Trashpresso set up in Singapore. We are still deciding whether we should make it automated, or let humans do the recycling."

The Robin is a trash sorting system that allows users to track and earn points if they sort the waste correctly.

"First, read the labels on the blue recycling bins ... and we will be changing this so it is even clearer ... to find out what recyclables you can put in," she said. Clothes, toys, shoes and pillow cases are not recyclable.

"Second, make sure your recyclables in blue recycling bins are clean and dry. Any packaging with food or liquids will contaminate the other recyclables. This will waste the efforts of other Singaporeans who are doing their part.

"Third, you do not need to sort the materials that you put into the blue bins. We practise a co-mingled recycling system."

Dr Khor explained that this means recyclables will be sorted centrally at material recovery facilities after they are collected from the blue bins.