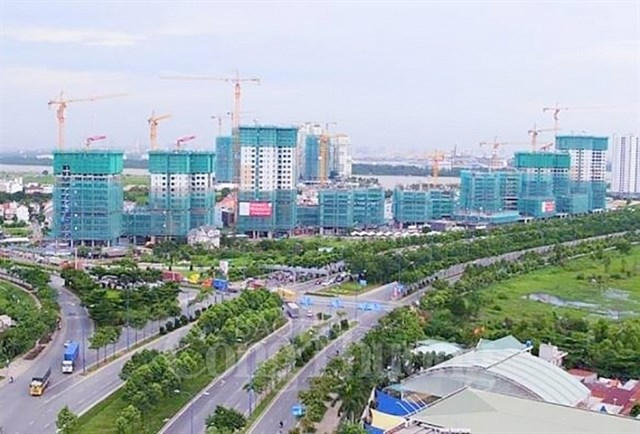 More positive signs will be seen in HCM City’s property market in the second semester of 2019 despite difficulties in the first half of the year, Chairman of the HCM City Real Estate Association Le Hoang Chau said last week.

Speaking at a seminar, Chau noted the lack of a rosy picture in the property market. Since March 7, 2017, when the Prime Minister requested the projects using State-owned land to be reviewed, the market has faced considerable challenges and difficulties.
In 2017, the real estate market grew 4.07 per cent from the previous year but began to decline in 2018.
In the first seven months of 2019, the whole market shrank 34 per cent in size, including a 29-per cent fall in project numbers and a 34-per cent decrease in apartment supply. Supply dropped 44 per cent in the high-end segment and 34 per cent in the pocket-sized segment. No low-end property projects were put up for sale.
Between January and July, the Construction Department of HCM City submitted only three new projects to the municipal People’s Committee for consideration, down more than 80 per cent. State budget revenue from real estate also nosedived more than 60 per cent, he noted.
“Every cloud has its own silver lining and the estate market has brighter prospects from now until the end of this year, including the implementation of projects in the eastern and southern areas,” he added.
Some experts are concerned about the draft that will replace Circular 36/2014/TT-NHNN, saying it could have adverse impacts on the real estate market as it would see the State Bank of Vietnam reducing the ratio of short-term capital for medium- and long-term loans. Under the three-phase roadmap lasting until 2022, the maximum ratio of short-term funds used for medium- and long-term loans will be reduced to 30 per cent by July 1, 2020.
The draft circular also sets the risk weight ratio for home purchasing loans worth VND3 billion (Bt3.96 million) and above at 150 per cent and the rate for loans worth VND1.5-3 billion at 100 per cent. [The current ratio for both loans is 50 per cent.]
For loans worth less than VND1.5 billion and loans to buy property in social and Government-supported housing projects, the rate is set at 50 per cent.
The revision was expected to tighten credit for the property market, especially luxury housing projects.
However, figures from the central bank showed that credit outstanding in the first half of the year increased by 7.33 per cent compared to the end of 2018. Particularly in the real estate sector, credit outstanding reached nearly VND1.4 quadrillion, a 6.5 per cent year-on-year increase.
Lawyer Bui Quang Tin said the policies tightening credit for the property market were being applied for some projects and investors, but not for all. At the end of the year, there would be many bright spots including capital inflows, especially in the real estate market.
Although the total volume of real estate transactions in the first six months of the year decreased by 34 per cent, prices did not go down. This difficult phase of the property market was not the same as the previous downward waves. Vietnam had a good macro-base as a development opportunity of the stock market, real estate and growth of all sectors, he added.