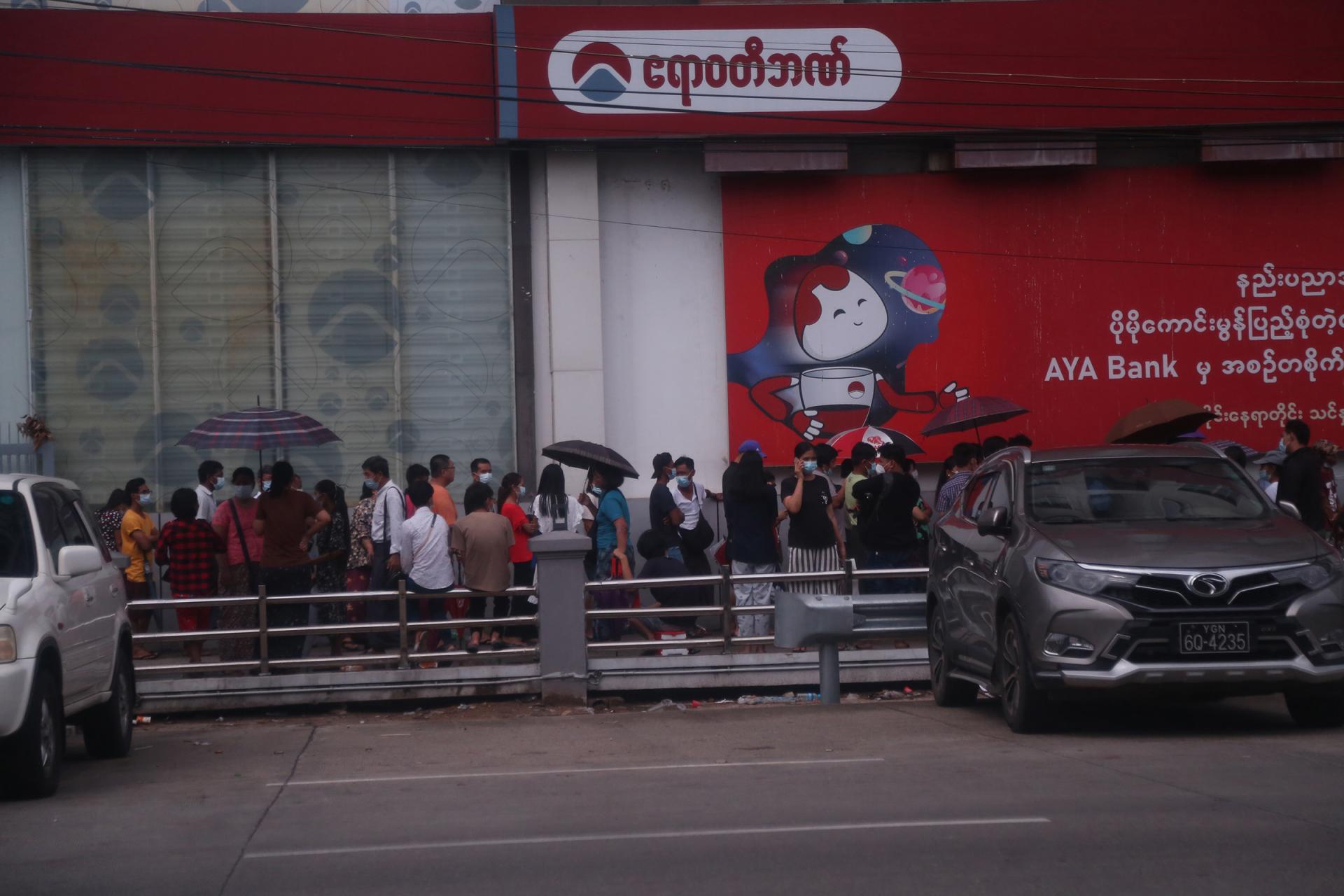 YANGON – Even before the 4 am curfew is over, a city resident rushed to the nearest ATM to withdraw cash. Already there were 20 people queuing ahead of him.

Political instability, plunging Kyat value against US dollar and uncertain future have add to people’s anxiety to hold cash. A decade ago, it was not unusual for a Myanmar family to hide a pile of cash under their beds. But since the opening up of the economy and subsequent election which led to power sharing between the National League for Democracy and the military, trust in putting money in the banks as savings had prevailed.

But all is shattered as the Central Bank of Myanmar struggled to win over people confidence and prevent bank runs.

"Come around at 4 am”. Bank customers brought small stools with them to sit as they queued up just to withdraw limited amount of cash money from the ATM. As cash run out of the machines and are refilled there were more waiting time for the customers.

Such gave way to a newly found job – ATM bystanders for hire. The fee has climbed steadily in tangent with the demand and anxiety. It’s 10,000 Kyat (about US$6)

"It's like a full time job to queue up in front of the ATM. At least some small Myanmar Kyat can be withdrawn. Those with dollar accounts are dead in the water,” said a queuing bank customer.

Anxious savers have turned to gold and foreign currencies especially US dollar as usual in time of high uncertainty. The black market quashed in recent years as banking normalcy prevails because of political stability, has returned.

The  banks are working to appear as reliable as possible amidst all kinds of rumours. Some private banks, such as Yoma Bank, have reopened several of their branches on April 20 as well as set up an appointment system that customers must book in order to withdraw cash.

CB Bank has set up a token system to reserve their appointment with bank-tellers. You can get token queuing service online as well.

Even then long queues are formed at all leading banks - KBZ, AYA, CB and Yoma.

KBZ Bank imposes a limited daily withdrawals at 200,000 Kyat per day. For Yoma Bank’s limit is 300,000 Kyat and only one bank card is allowed per person.

CB Bank imposes a daily limit of 200,000 Kyat, and has announced that their ATM machines are still working as normal.  It issued a statement assuring the customers that they are striving to fulfil the needs of their customers.

The Central Bank of Myanmar has issued a statement on April 7 that the public can trust the banks to provide their regular services, in  order to keep the situation from escalating further.

The Central Bank added that it was supervising the banks so that they  can resume operations systematically and that the people should place their trust in the banks.

It had also pushed for online banking services and banks were allowed to resume some of their online payments and other services such as allowing Account-to- Account Transfer, Wallet-to-Wallet, Bank-to-Wallet, Wallet-to-Bank, CBM Net, CCT Function through Mobile Banking, Internet Banking, Mobile Top-up, Other Cards Top-up, Bill Payments, Visa, Master, Credit Card Payments, MPU Cards, ALL ATMs, Bank Pays and so on.

However, despite having allowed mobile banking systems resumed with mobile internet after a period of lapse, the Yangon Region is still seeing long queues of people at ATMs throughout the city to get cash.

"You have to have cash for something. You need to have cash in hand. That's why I'm here," said a woman queuing up for the ATM in Kyimyindaing Township within a line of at least 100 people.

"There are slightly less people today. In previous days, there are at least four rows because the queue ran out of space and had to double back on itself. There are also many that came as early as 4am in the morning. This place sees regular refills of cash and since this place has less risk of running out of cash, people opt to come here instead," said a Kyimyindaing local that lives near the said ATM machines.

On April 30, KBZ Bank - the private bank with highest number of branches in the country - announced that there are 300 locations across the country that customers can withdraw cash from.

"Banking is essentially about savings and loans and interests are earned or paid.  There are rules and regulations to be followed but there are instances where things can get murky. So plans must be made to ensure predictability, and that is an essential skill in the banking," said a bank owner.

Despite all this, the people still worry that the banks may go under eventually.

"It's easy to say a bank will go bankrupt but in reality it's not that easy for a bank to go bankrupt in the first place. There are many strong pillars for endurance," said an expert on banking.

Banks have to send daily audit reports, such as total deposits, loans and so on, to the Central Bank. They also have to send weekly and monthly reports of income and expenses and get audited.

"The current spike in gold and dollar prices is temporary. It occurs often in Myanmar. If something happens, people will sell this to buy that and usually turns out to have more people not profiting than those that do. Nobody, in this day and age, will allow a bank to collapse. Banks are not only for self gain but also for the economic well being of the country. A bank collapsing is like a devastating tsunami which will ravage the country. (I) do not want the trust built up for so many years to be destroyed and for people to be scared by rumours," said the expert on banking.

According to the Central Bank, not only is it keeping a close eye on the operations of banks, it is also conducting on-ground surveillance and checks in order for the banking sector to get back on track by checking, amongst others, the project revenues and expenses.

The Central Bank's primary duty is ensure that the currency remain stable and for other systems such as payment to develop. It is also its job to protect the deposits of the people.