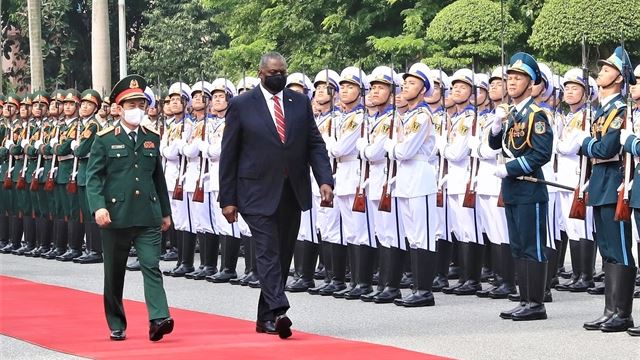 HÀ NỘI — Vietnamese Minister of Defence, General Phan Văn Giang, and his US counterpart Lloyd Austin, have underlined the need to respect international law in the South China Sea (known in Việt Nam as the East Sea) during talks in Hà Nội on Thursday.

The two defence chiefs said they are linked by a mutual understanding of the importance of respecting the legal rights of coastal countries, and a belief in the resolution of disputes and conflicts via peaceful means.

The two countries have a shared belief in the maintenance of peace, stability, security, order and freedom of flight and navigation in waterways and oceans in line with international law and the 1982 United Nations Convention on the Law of the Sea (UNCLOS), a statement from the Vietnamese Ministry of Defence said.

The two defence leaders also noted their appreciation for the results of cooperation between the two defence ministries, particularly regarding addressing the legacies of the war including searching for soldiers missing in action, efforts to remove landmines, and ameliorating the consequences of Agent Orange/dioxin; as well as resolving non-traditional security issues like COVID-19 prevention and control, search and rescue efforts, humanitarian assistance and disaster relief, and supporting Việt Nam’s participation in UN peacekeeping missions.

The US Secretary of Defence also announced it would supply medical equipment support to aid Việt Nam’s COVID-19 prevention efforts.

The trip by the US official also reaffirmed U.S. support for a strong, prosperous, and independent Việt Nam that contributes to international security.

The two ministers agreed to continue to boost cooperation as outlined in the Memorandum of Understanding on Advancing Bilateral Defence Cooperation in 2011 and the Việt Nam-US Joint Vision Statement on Defence Relations signed in 2015. These agreements give priority to overcoming the consequences of war, enhancing the capacity of law enforcement at sea, cooperation in military medicine to tackle COVID-19, training, as well as understanding the capabilities and needs of each party with regards to their respective defence industries.

Austin also agreed to focus on accelerating the dioxin decontamination project at Biên Hoà Airport in the southern province of Đồng Nai to ensure the schedule is met, along with other humanitarian projects in Việt Nam and support projects for Vietnamese law enforcement at sea.

During the talks, the two sides also discussed regional and international issues of mutual concern – especially traditional and non-traditional security threats in the region.

They also stressed the central role of the Association of Southeast Asian Nations (ASEAN) in promoting cooperation within the framework of the ASEAN Defence Ministers Meeting plus Russia, China, US, Japan, the Republic of Korea, Australia, New Zealand and India (ADMM+) to maintain peace in the region and in the world.

At the end of the talks, the two defence ministers signed a memorandum of understanding on cooperation in locating, recovering, and identifying the remains of Vietnamese martyrs. They also exchanged war memorabilia and artefacts.

Prior to the meeting with his Vietnamese counterpart, Lloyd Austin, had paid a visit to Hoả Lò Prison, which was originally built by the French to detain Vietnamese revolutionaries during the colonial era and then held American prisoners of war during the Resistance War Against America.

"I wanted to make sure one of my first stops in Việt Nam was to the Hỏa Lò Prison in Hà Nội. It is a visible reminder of the cost of war, and why our strong bilateral partnership with Vietnam today is rooted in our shared sacrifice," he said via Twitter. — VNS