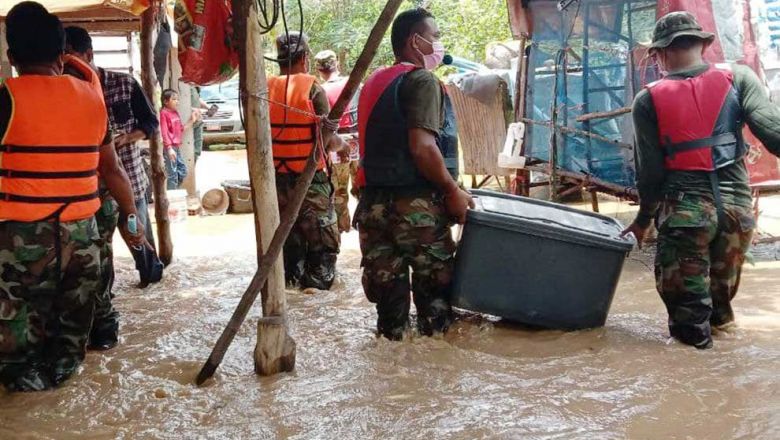 Malai district governor Svay Chea told The Post that 50 houses were flooded in Boeung Beng commune and another 60 houses in Malai commune.

“The rain was not too heavy, but the Thai side opened water gates to let water flow to our side as they were afraid their dams would break. That is why some residents’ houses in the two communes were flooded,” he said.

Chea blamed the Thai side for repeatedly not following the spirit of a memorandum of understanding, which states that the Thais must provide advance information about when the gates are opened so that Cambodia can prepare.

He reiterated his call for the Thai side to provide information to Cambodia before deciding to open the dam’s gate.

Sopheak said that at this time, some houses in Buor commune, located at the lower part of the stream, are gradually being flooded while the rain continues to fall moderately to heavy.

“It has been raining heavily for two days in a row, and about 60 houses in the three communes have been flooded with water up to people’s knees. We are worried about whether the rain will continue to fall as the Ministry of Water Resources and Meteorology has predicted,” he said.

According to the recent weather forecast from the water resources ministry, there will continue to be scattered rainfalls nationwide with moderate to heavy downpours, which could cause flash floods in the lowlands, especially the central lowlands, and rainfall catchment areas on the ridge of the Dangrek Mountains and the northeastern plateau.

National Committee for Disaster Management (NCDM) spokesman Khun Sokha told The Post that at this time, NCDM’s municipal and provincial branches are ready to assist people in vulnerable and flooded areas.

“Currently, each working group has prepared all means, forces and equipment to intervene,” he said.