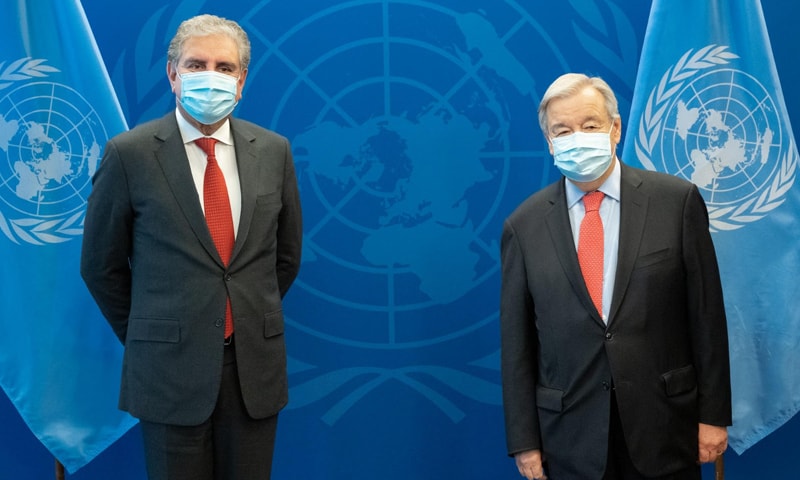 In meeting with UN chief, Qureshi calls for urgent action on humanitarian crisis in Afghanistan

Foreign Minister Shah Mahmood Qureshi met UN Secretary General Antonio Guterres on the sidelines of the 76th session of the UN General Assembly in New York on Friday and stressed "urgent action" to address the humanitarian crisis in war-torn Afghanistan, according to a statement issued by the Foreign Office (FO).

"Qureshi underscored the need for urgent action to address the prevailing dire humanitarian situation in [the] country, calling for the continued political and economic engagement of the international community to end [the] decades-long conflict," the statement said.

It added that the foreign minister also highlighted Pakistan’s ongoing efforts to address the humanitarian situation and those aimed at achieving lasting peace and stability in the neighbouring country.

Moreover, the statement said, Qureshi briefed Guterres on the "deteriorating human rights" situation in Indian-occupied Kashmir and shared with him a "comprehensive dossier containing evidence of gross, systematic, and widespread human rights violations, war crimes, crime against humanity and genocide being perpetrated by Indian occupation forces" in the valley.

Qureshi also expressed hope that the UN would play its role in ensuring that the people of occupied Kashmir were able to "exercise their inalienable right to self-determination as enshrined in the relevant UN resolutions".

According to the statement, the minister called for making the UN Security Council (UNSC) "more representative, democratic, transparent, effective and accountable to address the multiple challenges" faced by the world.

He emphasised that reforms must be decided by consensus and member states must be allowed the necessary time and space to evolve a solution acceptable to the entire UN membership, the statement said.

Qureshi also called for the need for stemming the rising tide of Islamophobia, ending vaccine inequity, and ensuring adequate financing for developing countries to respond to the pandemic and the resulting economic crisis.

After the meeting, Qureshi briefly shared the the details of his talk with Guterres in a tweet.

"We look to the UN to play central role in addressing and overcoming these challenges."

ccording to the FO, the foreign minister also met the president of the 76th Session of the general assembly, Abdulla Shahid, on the day and congratulated him on his election to the position.

Qureshi expressed the hope that Shahid's presence in this important office would help with making progress on important issues on the UN agenda.

The foreign minister's meetings coincided with Prime Minister Imran Khan's address at the UNGA, which outlined the same issues raised by Qureshi in his meeting with Guterres.

In his address, the prime minister made a strong pitch for the world to rally behind Afghanistan’s nascent Taliban government for preserving the progress made by the war-ravaged country over the past two decades and preventing it from turning into a safe haven for terrorists.

"There is only one way to go. We must strengthen and stabilise the current government, for the sake of the people of Afghanistan,” he said, warning that taking a course contrary to this would further destabilise the war-torn country and turn it into a terrorists’ haven.

Since the Taliban takeover of Kabul, Pakistan has consistently called for recognition of the new Taliban government, assistance for averting the looming humanitarian crisis in Afghanistan, and resumption of development aid for the new administration for preventing an imminent economic collapse there. This has dominated Pakistan’s foreign policy agenda for the past few weeks.

Most of the Western countries have expressed interest in engaging the Taliban and promised humanitarian aid. But, they have been reluctant to formally recognise the group as the government in office in Afghanistan and provide development assistance that has historically funded the functioning of the state institutions there.

This reluctance has been fuelled by fears about human rights under the Taliban regime, especially those of women; lack of representation of other ethnicities, religious minorities, and women in the government; and concerns about the resurgence of terrorist groups in Afghanistan that could threaten other countries.

'Environment of talks with Blinken was good'

Speaking at a press conference with Pakistani media representatives, Qureshi recapped the speech by PM Imran at the UNGA and his various meetings with officials over the past few days.

Commenting on his meeting with US State Secretary Antony Blinken, he said: "The environment of the talks was very good.

"He listened to all the things I said with great attention, noted them down and gave me the full opportunity to present my stance," he said, adding that the talks had stretched beyond the time allocated.

"So I am satisfied, as for any breakthroughs, there are several things [such as] what are their overall wishes, goals and [what are] Pakistan's needs. So we should look at all of that and move forward in a realistic manner.

"I don't think we should associate ourselves with unrealistic wishes but they also realised, and are cognizant, of Pakistan's importance and need. They will realise that Pakistan can better serve as an ally in the current situation," he said.

Responding to a question from a reporter, the foreign minister said: "I didn't go to take anything".

He said that the purpose of the meeting was to remove misunderstandings and make Pakistan's role clear, adding that more interactions could be expected in the future.

He said that Pakistan supported an inclusive Afghan government but some patience was required. He highlighted how the Taliban had included other ethnicities in the expansion of their government.

Summing up his meeting with Blinken, Qureshi said he had advised three things: engagement, persuasion and patience with the Taliban.

Regarding PM Imran's UNGA address, Qureshi said he had addressed every topic that was important in the nation's eyes particularly human rights violations in occupied Kashmir.

"He presented a review of Afghanistan, and I don't think any Pakistani leader has [presented] such a strong and clear stance on Afghanistan," he said.