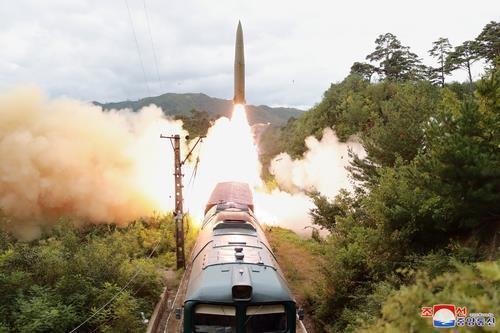 North Korea fired a short-range missile into the East Sea on Tuesday, South Korea’s Joint Chiefs of Staff said. The launch took place just minutes before North Korea’s ambassador to the UN urged the US to drop its “hostile policy” at the UN.

The JCS offered no details, saying South Korean and US intelligence are looking into the launch, while Japan’s defense minister said the projectile appeared to be a ballistic missile, without elaborating. North Korea has recently test-launched ballistic missiles, criticizing US hostile policy.

At the UN General Assembly, Kim Song, North Korea’s UN envoy, said the US has to scrap its hostile policy and stop holding joint military drills with South Korea and bringing in strategic weapons into the Korean Peninsula.

“The US should show all of that in action and not words,” Kim said, noting North Korea would be open to any offer to talks once the US makes the change. He added he believed Washington would not drop the policy right away and Pyongyang would no longer ask but watch how the situation unfolds.

The US abandoning its “hostile policy” was one of the two conditions, alongside doing away with “double standards,” that North Korea suggested last week South Korea find ways to do in order to reopen nuclear dialogue. Cheong Wa Dae said it was closely looking at the proposal.

The “double standards” mentioned were Washington’s reaction to the two Korea’s missile tests on Sept. 15, when they tested their ballistic missiles hours apart. The US condemned the North Korean test but not the South Korean launch.

Since then, Pyongyang has reached out to Seoul with overture on talks if the South drops the hostile policy and double standards.

While the Moon Jae-in administration is looking to seize the opportunity to reconnect with the regime at the last minute before Moon leaves office in less than a year, some experts consider the offer a ruse to see Seoul’s response and make it accountable for actions it takes against Pyongyang later.

South Korea cannot unilaterally make change to either of the US position and even if Seoul were to do it, Seoul risks fraying the alliance with Washington, experts said, adding that North Korea was manipulating the Moon administration, which is eager to see another Moon-Kim summit open.

Moon and Kim have met three times since April 2018, but the two Koreas have seen little progress on denuclearization.