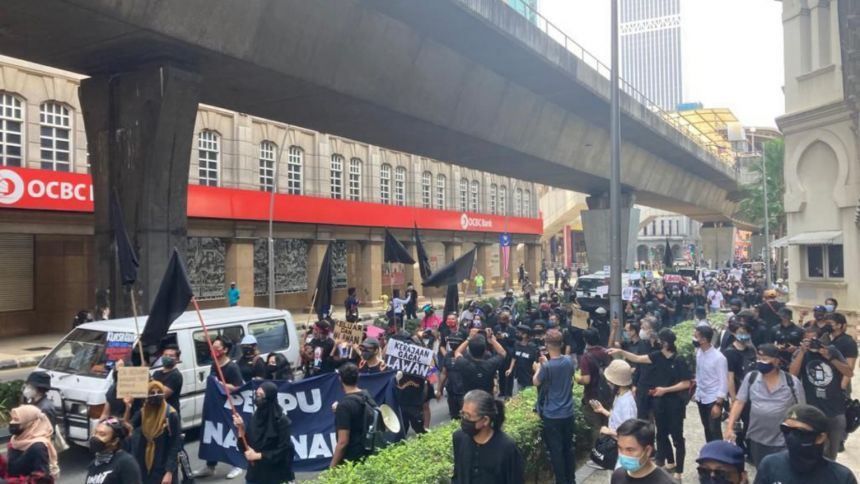 Roads around Merdeka Square, where National Day parades were often held, were sealed off as protesters dressed in black took to the streets. The demonstration was organised by a coalition of youth and civil society groups, called the Sekretariat Solidariti Rakyat (People's Solidarity Secretariat).

Some brought mock corpses wrapped in white cloth to symbolise the high number of daily Covid-19 deaths in Malaysia, in a criticism of the government's handling of the pandemic.

The coalition is also calling for a full parliamentary sitting and automatic bank loan moratoriums to ease hardship fuelled by the ongoing Covid-19 lockdown.

Traffic police and plainclothes police were seen standing by at the scene, The Star reported. Some marshals donning white safety hats and medics wearing red safety hats were also present.

According to The Star, the Commissioner, Datuk Azmi, said the police have not received any application or notice from the organising committee of the proposed gathering.

District police said on Saturday that they would call up the organisers and those who took part in the rally.

Youth activist Sarah Irdina, 20, said she was detained for nearly 11 hours, two days ago, over her Twitter posts about the planned protest.

"This failed government's inhumane treatment of those that fight for a better Malaysia is what keeps hurting us Malaysians, when their job is supposedly to protect us. This is why we #lawan (fight)," she wrote on Twitter on Friday (July 30).

The protest comes as PM Muhyiddin faces a constitutional crisis amid pressure to step down after clashing with the King, Sultan Abdullah Ahmad Shah.

There had been calls, even from Mr Muhyiddin’s own allies in Umno party, for him to quit.