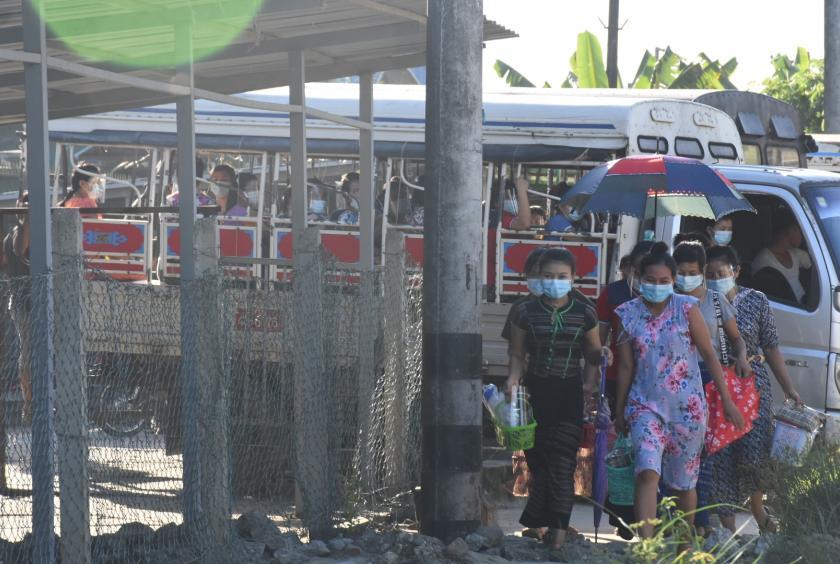 A lot of manufacturing businesses and factories in Myanmar have closed and are closing with their workers having no chance but to return home, following surges in Covid-19 cases in the third wave. Output, new orders, purchases, employment, and postproduction inventories all fell at quicker rates, with declines that were amongst the quickest in the series history, according to Manufacturing Purchasing Manager’s Index released for July 2021.

Manufacturing companies are still confident that their production capacity will improve in next 12 months, but the degree of optimism remained much lower than the long-run series average.

Turning to prices, raw material shortages and unfavorable exchange rate movements against the dollar contributed to a solid rate of input price inflation, standing higher than the long-run average.

The IHS Markit Myanmar Manufacturing PMI sank to 33.5 in July 2021 from 41.5 in June, pointing to the 11th straight month of contraction. The decline has reached record level over the three months, the steepest since December 2015.

“These days, inflation and pressures have decreased significantly up from the highest in May and June. Yet, great burden such as costs still remain in July. Kyat-dollar exchange rate fluctuation and cash shortages are biggest dangers,” said Shreeya Patel, economic expert from HIS Markit.

Those who answered the questions in the survey said factory closures had stemmed from surging Covid-19 cases, adding that production capacity has started to decline speedily since March.

“Myanmar’s production sector has declined rapidly since the second half of 2021. The Covid-19 case surges in the third wave and the political situation had plunged the industry into a steep decline just as it regained some footholds. Factory closures and return of workers to their homes are these factors. So, the companies are hesitant about increasing their balance accounts,” she added.

Local demand remained weak at the start of the quarter and new orders have declined significantly. Most of those participating in the poll mainly described a combination of business and factory closures and cash shortages.

Purchases have also seen a steep decline due to decreasing output, orders and prices and factory closures.

Despite a significant decrease in inflation when compared to May and June, it stands higher than the long-run average.

But, a greater vaccination effort could help prevent future diseases and create a shield for the healthcare system, she added.

The Covid-19 pandemic has plunged global economy into a biggest downturn after the recession in the 1930s.

Millions of people from across the world are out of work, government budgets in limbo, financial market almost collapsed and trade flow and investment greatly impacted.

The pandemic will cause consequences, a threat to global development and wealth.

Under such circumstances, Myanmar already facing economic challenges has seen other new challenges.

Myanmar's economy is set to shrink by 18 percent this fiscal year (October 2020 to September 2021) amid the ongoing situations including poverty and a rapid surge in the third wave of COVID-19 in the country, the World Bank said in its latest report on July 26.

The political crisis and Covid-19 case surges in the third wave have significantly impacted the country’s weakening economy.

“Around 1 million jobs could be lost, and many other workers will experience a decline in their incomes due to reduced hours or wages,” the bank said. The share of Myanmar’s population living in poverty is likely to more than double by the beginning of 2022, compared to levels before COVID-19 hit, the bank said.

“The loss of jobs and income and heightened health and food security risks are compounding the welfare challenges faced by the poorest and most vulnerable, including those that were already hit hardest by the pandemic last year,” said Mariam Sherman, World Bank country director for Myanmar, Cambodia and Laos.

The current third wave of COVID-19 is posing an immediate threat to lives, livelihoods and the economy, especially given the lack of capacity in the public health system to adequately respond, the World Bank warned.

While testing rates remain limited, extremely high positivity rates among those who have been tested indicate widespread community transmission. Combined with the impact of containment measures and precautionary behavior, this will amplify Myanmar’s economic challenges, the bank said.

Significant impacts on investment, human capital accumulation and the environment for doing business are likely to impair prospects for economic growth over the longer term,” it said.

“While there were initial signs of stabilization in some areas in May and June, with mobility improving and logistics disruptions easing, overall economic activity remained very weak and a further contraction is likely from July onwards due to the recent surge in COVID-19 cases,” said Kim Alan Edwards, World Bank Senior Economist for Myanmar.

Over the longer term, recent events have the potential to jeopardize much of the development progress that has been made over the past decade. Significant impacts on investment, human capital accumulation, and the environment for doing business are likely to impair prospects for economic growth over the longer term, the bank pointed out.

“It’s been long since we had to struggle with our businesses. The mechanism is still operating but very slowly. With the Covid outbreak, some businesses have stopped operation. Some are still running. As a businessman said, it was OK with everything when sitting idle, but we made losses only when we started a business. It’s better if we’d rather sit,” said a local entrepreneur.

An industrialist said the majority of entrepreneurs had expressed doubts if they could overcome the ongoing social, health, education and service impacts, especially economic ones, caused by the year-long Covid-19 crisis.

“The situation is worsening. Myanmar has already been hard hit by the second wave. We are considering how long we can survive. When it comes to a health issue, we have to close factories and businesses that harm our economy. Like in other countries, our government can work with polices, we can reduce our impact,” said an industrialist.

It is high time policy makers in Myanmar adopted suitable and correct policies to remedy the economy.

There are still many challenges to the effort to revive the affected private businesses, the backbone of the country’s economy.