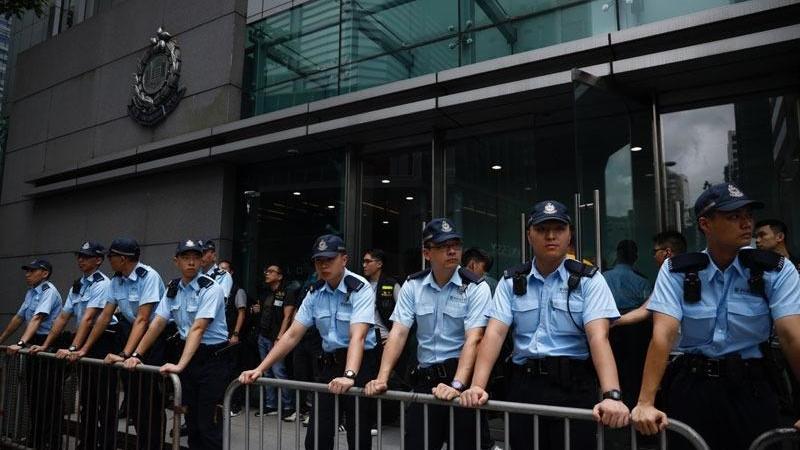 The national security department of the Hong Kong police on Wednesday arrested four people on suspicion of advocating terrorism in relation to a motion that paid tribute to a "lone wolf" police attacker.

Steve Li Kwai-wah, senior superintendent of the department, said the four arrested men are members of the student union of the University of Hong Kong. Local media reported that the arrested individuals include former student union president Kwok Wing-ho and chairman of the union council Kinson Cheung King-sang.

Li said the arrested people were suspected of advocating and glorifying terrorism, and encouraging suicidal behavior, which were not only morally unacceptable but also allegedly violations of Article 27 of the National Security Law for Hong Kong.

Those who were arrested also used their own means, including livestreaming the meeting for voting on the motion, to promote these messages to the public, Li said.

On July 7, the student union council passed a motion by 30 votes to 0 to "appreciate the sacrifice" of an assailant who stabbed a police officer before committing suicide on July 1, and express its condolences over his "unfortunate passing".

The motion drew huge backlash from officials, the university and the community. The union later withdrew the motion and several council members of the union stepped down.

Earlier on July 14, the university severed ties with the student union and would no longer recognize the union's role on campus. Later in August, the university banned those involved from entering the campus and using its facilities.

Chairman of the university council Arthur Li Kwok-cheung, in the wake of the motion, said expulsion could be a possible outcome for those involved.

In response, Chief Secretary John Lee Ka-chiu on Wednesday morning said the government has a duty to make it clear to the public that law enforcement will deal with illegal activities committed by anyone or any organization in accordance with the law.

Lee cautioned the public to think twice before taking any actions as Hong Kong is a city of rule of law and everyone shall obey the law.

Hong Kong Secretary for Security Chris Tang Ping-keung on Wednesday said advocating terrorism is a serious crime, since it may mislead innocent residents to participate in terrorist activities.

Speaking at the Legislative Council, Tang vowed to come down hard on terrorist activities and urged society to stand united against acts that glamorize violence to prevent extremists from misleading young people who might become terrorists.

Tang said there are signs of terrorism permeating the campus with attempts to recruit students to join terrorist activities. The recruitment, much like the behavior of international terrorist activities, mostly was carried out via social media platforms, Tang said.

Those who sympathize with violent attackers are easily persuaded to be supporters of violence and get involved in terrorist activities, he cautioned.

Glorifying terrorist activities may create soil for homegrown terrorism, therefore the government will step up intelligence collection to carry out full-scale investigation over online information that is fake, ill-intended and incites violence and hatred, Tang said.