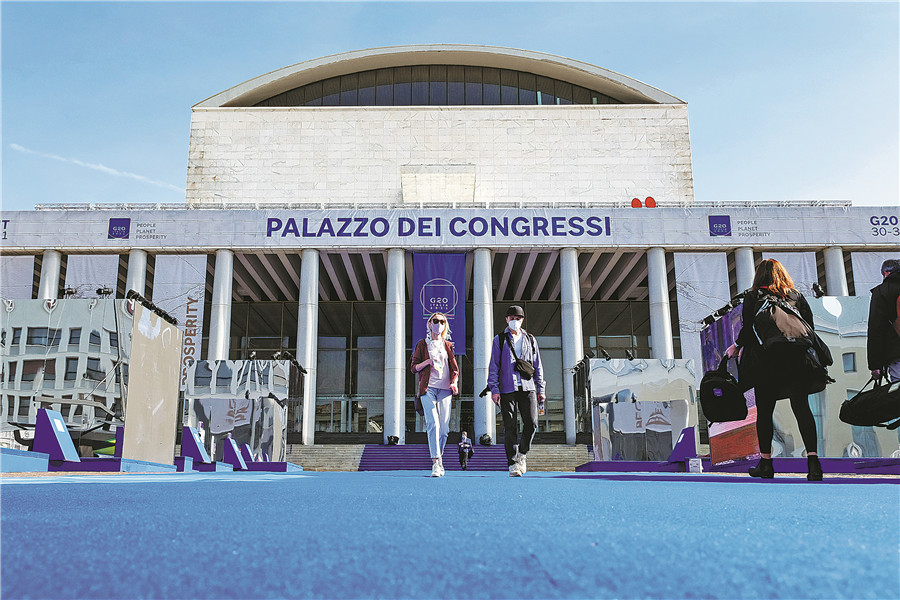 Nations have to fully cooperate at historic moment for humankind, experts point out

As leaders of the world's major economies descend in Rome for the G20 summit, experts voiced deep concern for the mounting global challenges and express skepticism of meaningful progress at the meeting.

Shen Dingli, a professor and former executive dean of the Institute of International Studies at Fudan University, said fighting the COVID-19 pandemic, climate change and tackling issues in global supply chains are likely to be among key topics at the summit.

"It is a historic moment for humankind to face the biggest challenges in a century and it requires full cooperation by all members," he said.

Eswar Prasad, a trade policy professor at Cornell University and senior fellow at the Brookings Institution, said a key challenge for G20 policymakers is cooperating on stimulating global growth without exacerbating rising divergences in short- and long-term prospects of advanced versus developing economies.

Gary Hufbauer, a nonresident senior fellow at the Peterson Institute for International Economics, said US President Joe Biden might get the broad outline of his huge "infrastructure" bill, but he does not yet have the votes to enact it.

"He will put on a brave face at the G20 summit, but without the key to legislation in his pocket," said Hufbauer, a former US Treasury Department official.

Biden announced on Thursday plans for a $1.75 billion package, much smaller than the original $3.5 trillion. But such a compromise is still facing a tough battle in the Congress.

With regard to industrial subsidies, Hufbauer said there is no apparent deal among the United States, the European Union and China.

"Maybe the G20 will just duck that subject. Nor is there any agreement on reviving the WTO Appellate Body, or even capping fishery subsidies," he said.

"So I don't see the G20 paving the way for a successful MC12 in mid-November," he said, referring to the 12th Ministerial Conference of the World Trade Organization that will take place in late November in Switzerland.

Shada Islam, founder of Brussels-based global strategy and advisory firm New Horizons Project, said the G20 summit should be a moment for world leaders to come together on the key challenges facing humanity, including climate change, but also global health and the need to fight poverty.

"While climate change is rightly on the priority list of G20 leaders, the summit should pay equal attention to the equally urgent need to tackle the large and growing inequities across the globe in access to healthcare and health products," she said.

"These figures are unacceptable and a serious reflection of the lack of global solidarity in tackling the pandemic," Islam said.

She said G20 leaders must ensure the fair global distribution of COVID-19 vaccines instead of hoarding vaccines, which may result in a predictable and utterly devastating vaccine scarcity for the rest of the world.

In a meeting last month, the WHO condemned wealthy nations for stockpiling vaccines, treatments and protective equipment, saying their failure to fairly distribute those resources is fueling COVID-19 outbreaks globally.

"This is not just unfair. It's not just immoral, it's prolonging the pandemic," said Maria Van Kerkhove, WHO's technical lead on COVID-19. "And it is resulting in people dying."