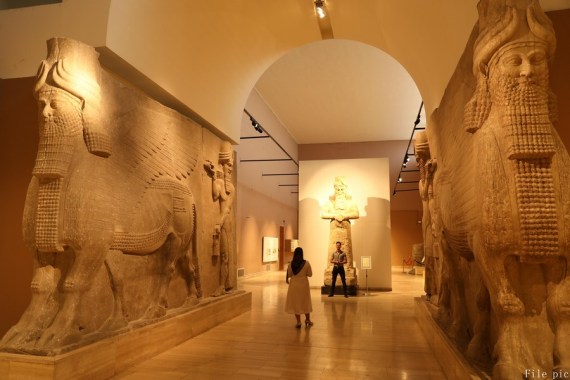 Iraq to reopen national museum after retrieving 17,000 artifacts from U.S.

Iraqi Prime Minister Mustafa al-Kadhimi ordered on Friday the reopening of the Iraq Museum in Baghdad, after some 17,000 looted artifacts were recovered from the United States.

"With the return of 17,000 Iraqi artifacts ... I ordered the reopening of the Iraq Museum to the public and researchers," al-Kadhimi said on his official Twitter page.

On Wednesday, Iraqi Minister of Culture, Tourism, and Antiquities Hassan Nadhim said in a statement that the retrieved tablets date back to 4,500 years ago and bear cuneiform inscriptions documenting the trade exchanges during the Sumerian civilization.

On Thursday, al-Kadhimi and his delegation returned to Baghdad after several days of visit to the United States and brought back the 17,000 artifacts.

According to the official statistics, about 15,000 pieces of cultural relics from the Stone Age, the Babylonian, Assyrian and Islamic periods were stolen or destroyed by looters after Saddam Hussein's regime was toppled by U.S.-led troops in 2003.

he Mosul Museum and ancient cities of Hatra and Nimrud had also been destroyed and large numbers of antiquities were smuggled after the Islamic State militants took control of large territories in northern and western Iraq in 2014.

More than 10,000 sites in Iraq are officially recognized as archaeological sites, but most of them are not safeguarded and many still being looted.