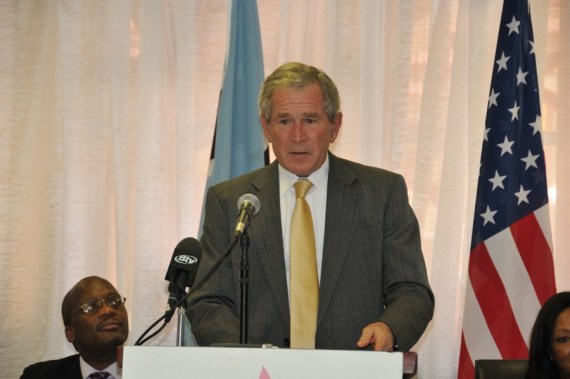 Bush lamented the division in the United States, contrasting the current political climate to the spirit of unity that he said he observed in the wake of the 9/11 attacks.

Former U.S. President George W. Bush on Saturday warned against domestic extremism, saying the country has seen "growing evidence that the dangers to our country can come not only across borders but from violence that gathers within."

"But in their disdain for pluralism, in their disregard for human life, in their determination to defile national symbols, they are children of the same foul spirit, and it is our continuing duty to confront them," he said.

Bush, who was in his first year as president when the horrific attacks took place, paid tribute to the passengers and crew members of Flight 93, which crashed in a field after those on board fought back against the hijackers and diverted them from their intended target.

The former Republican president lamented the division in the United States, contrasting the current political climate to the spirit of unity that he said he observed in the wake of the 9/11 attacks.

"A malign force seems at work in our common life that turns every disagreement into an argument, and every argument into a clash of cultures. So much of our politics has become a naked appeal to anger, fear, and resentment," Bush said. "That leaves us worried about our nation and our future together."

Bush has been outspoken about condemning violent insurrectionists who stormed the Capitol on Jan. 6 in an attempt to stop Congress from certifying the 2020 election results for President Joe Biden.