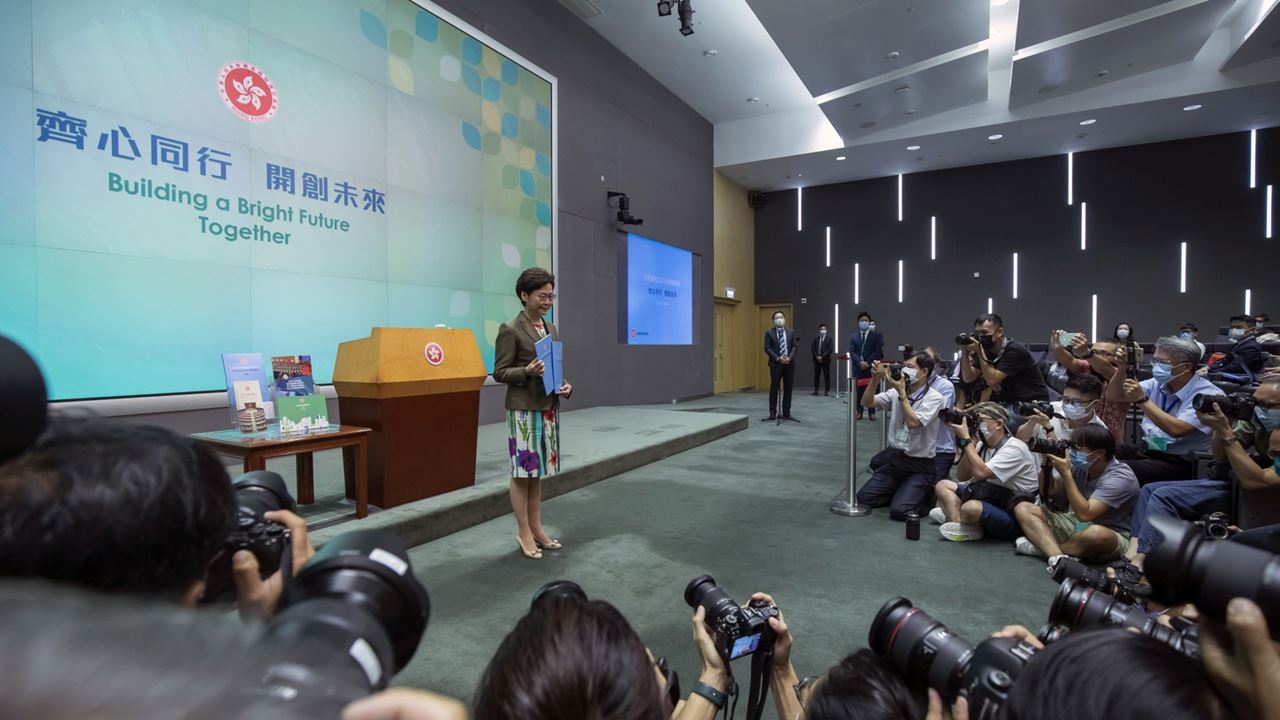 Hong Kongs leader outlined plans for a massive urban development on the border with China that appeared designed both to ease the worlds most expensive housing market and prove her own loyalty to Beijing.

The new "Northern Metropolis" will eventually provide homes for as many as 2.5 million residents, or a third of the city's current population, Hong Kong Chief Executive Carrie Lam said Wednesday in the last annual policy address of her current term.

The major development answers Beijing's call for the city to ease pressure on the world's least-affordable housing market that Chinese officials consider a catalyst for 2019's mass protests, which led to the imposition of a national security law. It also puts hard infrastructure behind Chinese President Xi Jinping's vision for Hong Kong's closer integration with nearby mainland cities such as Shenzhen and Guangzhou.

"I am confident that Hong Kong is much stronger than ever, and I am most convinced that Hong Kong can integrate into the overall development of the country," Lam told the city's Legislative Council, which has been purged of opposition members who were either disqualified, resigned in protest or jailed while awaiting trial on national security charges.

The announcement of the symbolic new development -- whose name mirrors Guangzhou's moniker as China's so-called Southern Metropolis -- was front and center in an occasionally combative policy address that emphasized how China's imposition of a national security law helped restore political stability to the former British colony.

The city's ever-tightening relationship with the mainland comes as its reputation as an open, international financial hub continues to suffer from strict pandemic travel restrictions and sharper rhetoric on foreign interference -- including what Lam called the "incessant and gross interference in Hong Kong affairs by external forces" in her speech.

The speech was derided as a platform for Lam's re-election, Lo Kin-hei, chairman of the Democratic Party, at a press briefing Wednesday afternoon.

Economists were skeptical the northern plan, which had no timeline, would help solve the city's housing problems in the near term.

"The problem is that none of this is immediate," said Alicia Garcia Herrero, chief economist for Asia Pacific with Natixis. Given the project's "location and size," she added that it would likely accommodate migrants from mainland China, easing concerns about "Hong Kong's sudden loss of population."

The plan calls for the development of a 300 square-kilometer (115.83 square mile) area -- 27% of Hong Kong's total size -- into an international information technology hub that will ultimately have as many as 926,000 residential units, including an existing 390,000 units in Yuen Long and the North District. A series of proposed rail links to Shenzhen would facilitate cross-border travel.

Lam called for some government offices to be based in the north, where she projected jobs would increase to 650,000, including 150,000 in the IT sector.

"The land development near the Shenzhen border should in the long term help resolve the housing problem and at the same time facilitate the interconnectedness with Shenzhen and the Greater Bay Area," said Tommy Wu, lead economist with Oxford Economics in Hong Kong. "However, there was really nothing on tackling housing supply shortage in the short term."

It's possible that Lam decided to focus on long-term planning as it was the last address of her current administration, he said.

Other proposals in the address included:

- Splitting up the Transport and Housing bureaus; setting up a Culture, Sports and Tourism bureau; creation of an expanded Innovation, Technology and Industry bureau

- Allowing the southbound trade of mainland stocks denominated in the yuan.

- Securing about 170 hectares of land in the next decade to facilitate 100,000 private residential units through land sales or railway property developments for tender.

- Devoting about HK$240 billion ($31 billion) over the next 15 to 20 years to address climate change, with an interim target to cease using coal for daily electricity by 2035.

- Plans to build a "mega courtroom" to handle a large number of pending cases.

Lam's tumultuous five-year term, which ends in June, has been marked by huge anti-government protests, widespread international criticism about the national security law, and the Covid-19 pandemic that worsened a recession and led to unprecedented border controls in the top Asian financial hub.

She began the speech with a broad defense of the national security law, praise for China's move to drastically alter the city's democratic elections and an attack on the now mostly-jailed pro-democracy opposition for stalling legislation that could have benefited Hong Kong residents.

She also pledged the government would deepen the city's security architecture by passing legislation to implement a security provision of the city's charter that calls for, among other things, measures to ban treason, sedition and theft of state secrets. An attempt by Hong Kong's local administration to enact that legislation in 2003 prompted widespread protests.

At the outset, she credited the central government for providing her with "staunch support" throughout and said under the protection of the national security law and the principle of patriots ruling Hong Kong, the city had "got back on the right track of one country, two systems."