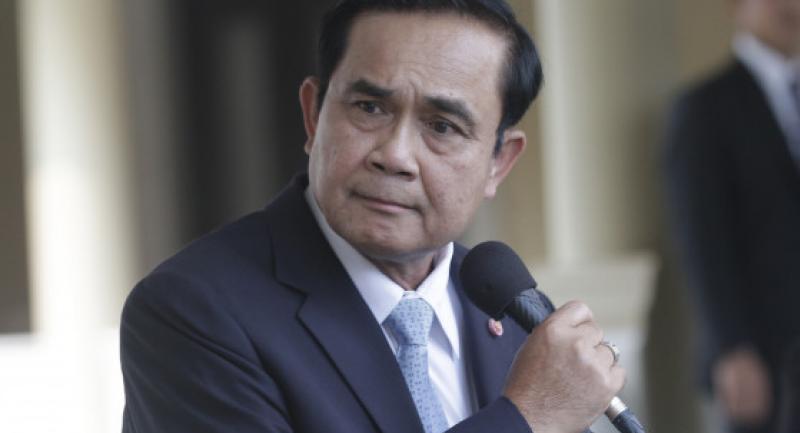 PRIME MINISTER General Prayut Chan-o-cha yesterday launched a campaign to enforce extradition treaties with foreign countries to hunt down lese majeste fugitives.
Insisting that the law needed to stay in place to distance the monarchy from politics, Prayut said, “If criticisms are allowed, they could draw the monarchy to be smeared with political agendas. Every Thai government preserves this law.”
Under the constitution, the Thai monarchy only “comes to endorse laws”, Prayut stressed at a press briefing yesterday.
He also compared defamation-related laws and lese majeste, saying they are alike in nature.
“The monarchy, unlike ordinary people, is unable to use the law on defamation to protect itself, therefore the authorities need the lese majeste law to protect them,” he said.
The Criminal Code’s Article 112, known as lese majeste, covers anyone defaming, insulting or threatening the King, the Queen, the royal heir or the regent, with punishment of three to 15 years in jail.
Prayut’s administration is known to be vigilant toward alleged lese majeste violators, having issued an order to prosecute them in military court. There are also instances of authorities charging people sharing or sending online private messages deemed as insulting the monarchy.
His remarks came shortly after authorities vowed to increase measures against lese majeste offenders, ranging from cooperation with online platform providers to monitor comments to asking foreign embassies to hunt down outlaws residing overseas.
Prayut said that foreign doubts about the need for lese majeste were disproved after the passing of His Majesty King Bhumibol Adulyadej, when critical commentators against the monarchy were publicly slammed in social media.
Prayut earlier urged people to accept different opinions and let law enforcers deal with offenders.
The current junta has prosecuted more than 60 cases of lese majeste in military court since 2014 when it seized power from an elected government. Many people who were charged or suspected of insulting the monarchy fled the Kingdom to seek asylum in foreign countries.

Complicated process
The PM yesterday ordered relevant agencies to study extradition treaties with foreign countries to bring the lese majeste suspects back to be prosecuted in Thailand, according to the government spokesman Sansern Kaewkamnerd.
Since the early 20th century, Thailand, then known as Siam, has signed extradition treaties with a dozen countries around the world, but implementation of such treaties is complicated because of different legal systems.
Enforcement of the extradition treaty was based on reciprocity. Extradition requests can be easily rejected unless the suspect committed the same crime in Thailand and the foreign country involved. Political charges are not included and the lese majeste charge does not exist in many countries.
Justice Minister Paiboon Koomchaya said last week he had signed letters to be sent to seven foreign countries where 19 Thai fugitives wanted on lese majeste charges were staying.
Foreign Minister Don Pramuwinai said yesterday that his ministry had conveyed Paiboon’s requests to many countries via diplomatic channels but declined to give any details of the countries involved.
“It is not easy to get extradition for the charge unless the fugitive commits the same crime in another country,” he said. “However, many countries are willing to cooperate.”
The Nation contacted many foreign embassies in Thailand regarding a report that the Justice Ministry sent formal requests to the diplomatic corps asking for |cooperation to track down Thai |lese majeste violators residing overseas.
Only the Australian Embassy confirmed it had received a request, without disclosing details. Other embassies either refused to comment or said they had not been contacted by the ministry.