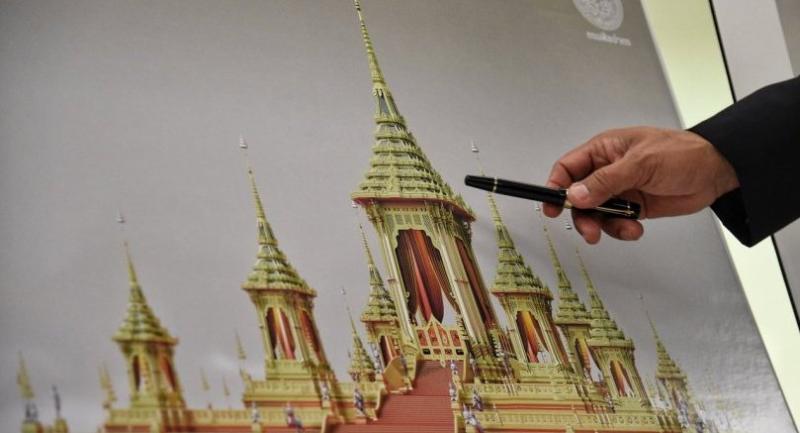 Structure will be biggest since that used for rama V: fine arts dept head

THE elaborate royal crematorium for the late and much-loved King, HM Bhumibol Adulyadej – Rama IX – will be the highest of any such structures since the reign of King Rama V.
“The royal crematorium will be 50.49 metres high,” Fine Arts Department’s head Anan Chuchote said yesterday.
Construction of the royal crematorium will begin after a worship ritual for the late King is held in late March or early April. Skilled craftsmen who wish to help with the creation of accessories for the royal crematorium can apply for a position until February 3.
Anan said the royal crematorium would occupy an area 60 metres wide and 60 metres long on Sanam Luang or royal ground by the Grand Palace. Adorning it will be several sculptures of gods, angels, mythical creatures and more.
Anan said royal crematoriums in the first four reigns of the Rattanakosin Era were about 80 metres tall but King Rama V lowered the height of such structures in his reign. But the royal crematorium for King Rama IX would at least be the tallest in the past century.
It will feature nine tiered rooftops and stand above a three-layer base.
“The royal crematorium will be constructed based on beliefs in the King’s semi-divine status and the Buddhist cosmology,” he said.
He said technology would be used in the construction to create 360-degree “gimmicks”.
Deputy Premier General Tanasak Patimapagorn, who chairs the committee overseeing the building of the royal crematorium and restoration of royal chariots for the cremation ceremony, will inspect the work site on February 9 to check on progress.
The chosen zone has already had some surface adjustment to pave the way for the task ahead.
King Rama IX had a seven-decade reign and worked tirelessly for the wellbeing of his people throughout that period. He is greatly revered by Thai citizens. When he passed away on October 13, the nation plunged into mourning.
For Thais and Thailand, it is of utmost importance that a proper and grand royal cremation is held for King Rama IX.
The Fine Arts Department’s Office of Traditional Arts started preparing the royal chariots for the cremation ceremony on January 9. The office will also recruit skilled craftsmen to help with preparing the kalamet royal urn and sculptures for the ceremony.
A total of 228 people applied for the chance to fulfil this task from January 16 to 25. Applications will be accepted until February 3. Successful candidates must pass a skills test and an interview.