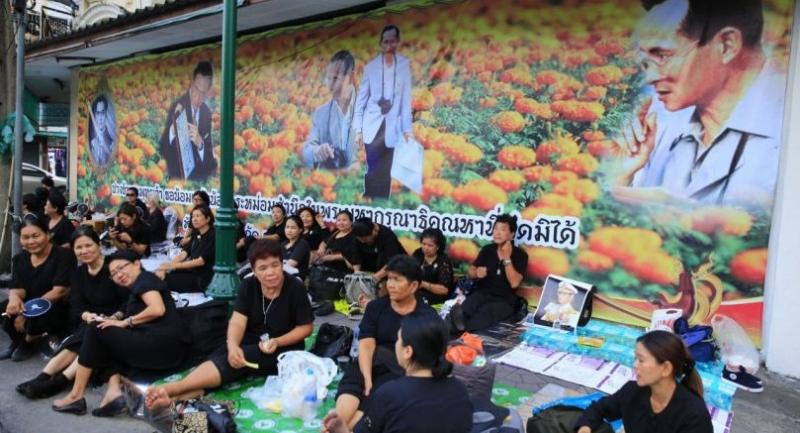 Bangkok at centre of the nation's attentions as mourners turn out to pay their final respects.

ALL ROADS LEAD to Bangkok today for the start of the Royal Cremation Ceremony for the much-revered HM the late King Bhumibol Adulyadej.
People have travelled by buses, private cars, trains and planes during the past days in the hope of getting as close as possible to the “Father of the Land” one last time.

The late monarch reigned over Thailand for seven full decades until his passing last year. People have been mourning his departure and are now prepared to bid him a heartfelt farewell.
As of press time last night, thousands of black-clad people were sitting or lying on footpaths near the nine entrances to the prime zones for members of the public to attend the Royal Cremation. They were to be opened today at 5am.

The Royal Cremation Ceremony will run from today until Sunday, with the actual cremation taking place tomorrow.
“I took a van ride from Nakhon Sawan province to attend the ceremony this week,” Piyapas Saengkhieo, 46, said as she queued for a shuttle bus to Sanam Luang, where the Royal Crematorium now stands tall next to the glittering Grand Palace.
Aree Kantasak, a 60-year-old farmer from Lamphun province, said she would stay at Sanam Luang until the Royal Cremation ceremonies end.
“I am not sure how near I can be to the ceremonial ground, but at least, I hope, I will be here for him,” she said.
Montha Kanha and six friends from the border province of Nong Khai took a train to Bangkok, bringing along food, clothes, umbrellas and medicines so they, too, would stand by their beloved late King one last time. “From my birth, I have seen a lot of his royal projects. His royal guidance, such as the sufficiency economy philosophy, can apply to all aspects of life,” the 58-year-old teacher said. “We wish to see him off to Heaven.”
Wichitra Busaba, a 53-year-old teacher, flew from Loei province to Bangkok but was prepared to sleep on the streets near Sanam Luang over the next few days.
“I am here to pay final farewell to the late King,” she said.
The government has estimated that about 250,000 mourners will turn up in areas near Sanam Luang tomorrow. Others can place sandalwood flowers at 85 replicas of the Royal Crematorium and hundreds of temples across Thailand to pay their final respects to one of the greatest Thai kings.
Mourners near Sanam Luang will have a chance to see the royal processions in honour of the late King with their own eyes. People in other areas, meanwhile, can watch on TV, as the ceremonies will be broadcast live.
PM’s Office Minister Omsin Chiwaphruek yesterday advised mourners to lay prostrate when the royal processions passed them, adding that umbrellas should not be raised at the time.

“The royal processions and people along the way will be recorded and televised worldwide. Let’s act properly for the good image of the Royal Thai Kingdom,” he said.